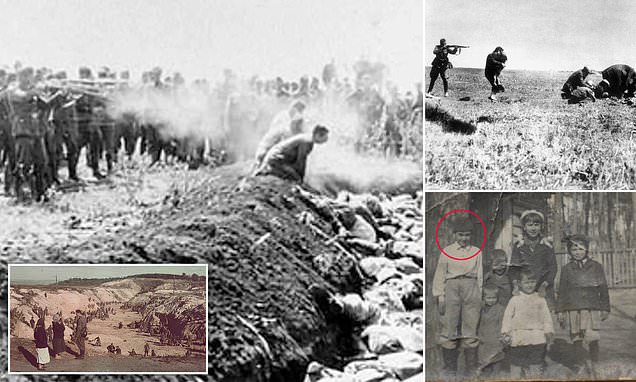 Clutching her two-week-old son in her bare arms, a young mother stared down into a ravine where a mass of naked corpses lay tangled together.

She stood among countless other Jewish women and children stretched along the edge of the gorge as far as the eye could see.

All had been forced to strip before being marched to this godforsaken place and they knew that in a few moments they would form part of the grotesque human collage below.

Recalling the scene years later, at his trial, one SS commander spoke of the ‘indescribable wailing’ echoing across the valley.

As a team of Nazi assassins moved along the line with their fast-action pistols, the mother was despatched with a single bullet to the back of her head.

We will never know whether her baby was murdered in the same way because, to save ammunition, the soldiers sometimes beat small children to death or left them to be crushed under the weight of fallen bodies.

What we do know, thanks to a meticulous investigation involving a former Scotland Yard war-crimes expert, is that this newborn innocent was the youngest victim of the Babyn Yar Massacre.

This month marks the 79th anniversary of that act of evil, one of World War II’s worst, yet shamefully forgotten, atrocities.

Between September 29 and 30, 1941, an estimated 33,771 Jews — almost all women, children, or elderly people — were herded to the canyon, 150 metres long, in the Ukrainian city of Kiev, where they were summarily slaughtered, then covered with soil and rubble. The wounded were buried alive.

Over the years, fragments of the story of this abomination have emerged. But until now they have never been fully pieced together.