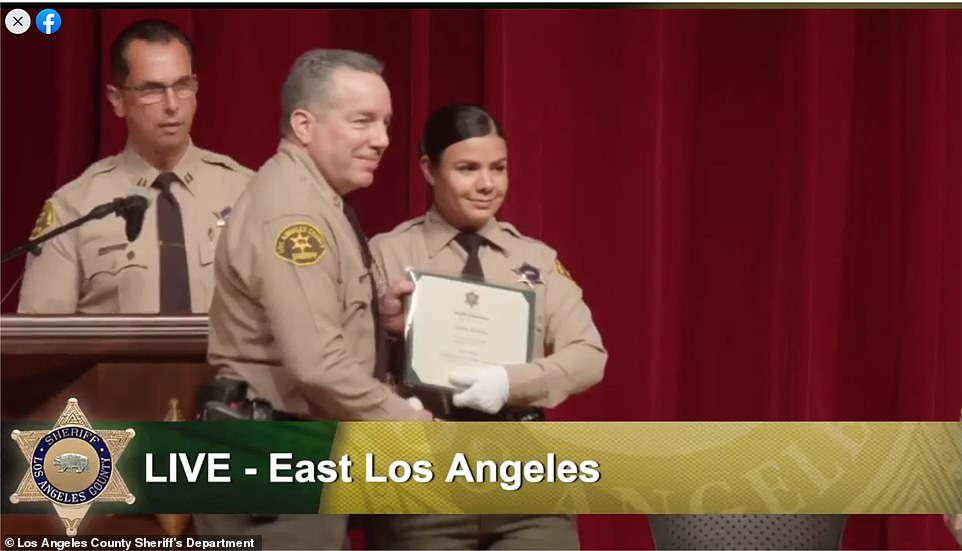 One of the Los Angeles police officers gunned down in cold blood on Saturday is a 31-year-old former librarian and mother who graduated from the Los Angeles Police Academy only last year.

DailyMail.com spoke to Claudia Apolinar’s 65-year-old father Adolfo who confirmed she was in a stable condition as he held a bedside vigil for her in hospital.

‘I’m here with her right now,’ he said in Spanish, adding that an LA Sheriff’s Department deputy was standing guard outside the hospital room.

Claudia and her 24-year-old male colleague were sitting in their patrol vehicle when a man ambushed them and shot them at point blank range on Saturday night.

Despite taking multiple bullets – one to the face and several to her upper torso – Claudia, 31, managed to get her partner to safety, apply a tourniquet and radio for help.

A photo of the aftermath of the attack shows the mother of a six-year-old child covered in blood, giving medical help to her injured partner.

The LA Sheriff’s Department is offering $100,000 for information leading to the arrest of the shooter, who is still at large.

Lead investigating officer Lt Brandon Dean told DailyMail.com that both Claudia and her 24-year-old partner are in stable condition in hospital.

‘By the grace of God they’re both going to pull through. They’re obviously pretty injured and it’s going to be life-altering but they’re in stable condition,’ he said.