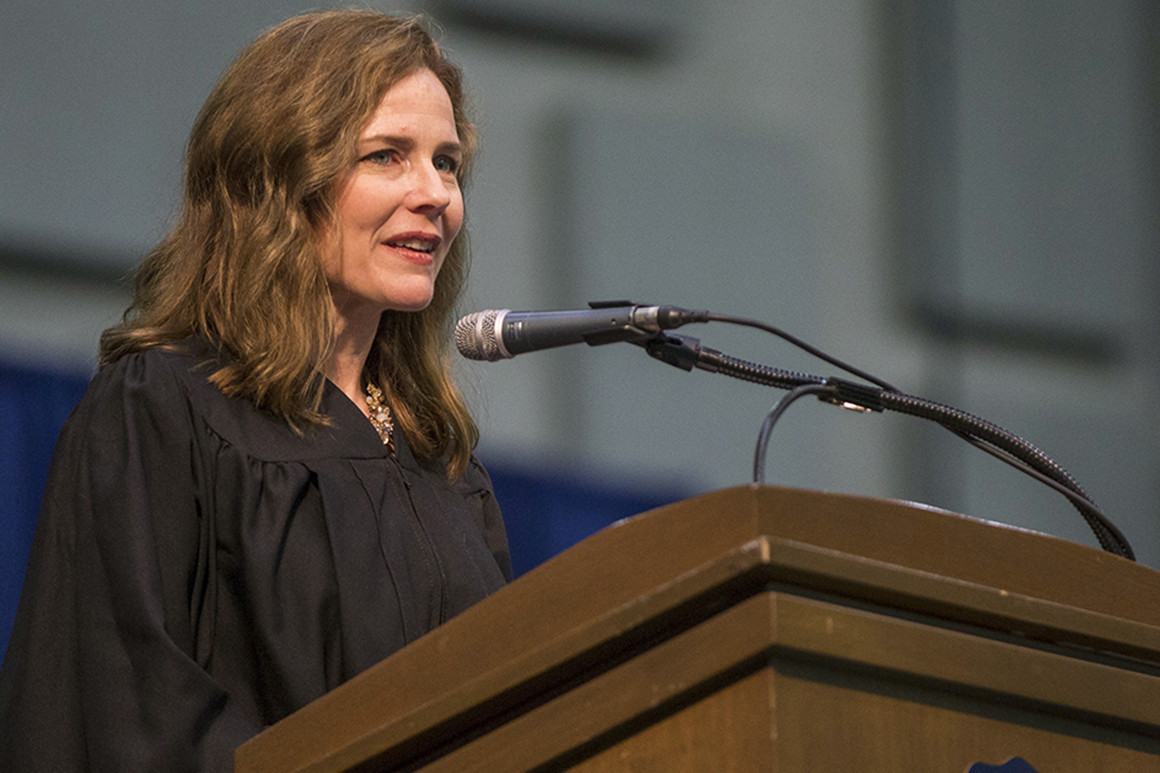 Before President Donald Trump has even announced his Supreme Court pick, conservatives are fighting to make the conservative Christian views of one of the leading contenders, 7th Circuit Judge Amy Coney Barrett, off-limits in any potential confirmation hearing.

Some critics of Barrett are invoking “The Handmaid’s Tale,” a dystopian feminist novel in which conservative Christians have stripped away women’s rights, as a symbol of their fear that her conservative religious beliefs could reshape American society. Supporters are raising claims of anti-Catholic bigotry, both in response to the critics and in anticipation what they say would be the onslaught to come if Barrett were nominated.

“We will be watching this carefully,” said Bill Donahue, president of the Catholic League, an anti-discrimination group. Citing alleged anti-Catholic bias, the group called on Tuesday for five high-profile Democratic senators — Chuck Schumer, Dianne Feinstein, Dick Durbin, Mazie Hirono and Kamala Harris — to recuse themselves if Barrett or the other leading contender, 11th Circuit Judge Barbara Lagoa, who is also Catholic, are nominated.

The group cited past comments by the five senators that it argued brought inappropriate attention to Barrett’s religion.

“The Democrats are making a big mistake if they talk about her religion,” said Father Thomas Reese, a Jesuit journalist and former editor-in-chief of the Catholic weekly magazine America.

“This isn’t about Catholicism,” said Hill, who argues that Barrett would curtail abortion rights and generally undermine the legal standing of women. “This isn’t even about religion. This is about extremism.”

Barrett, a devout Catholic, has herself weighed in on the conflict between church dogma and jurisprudence, co-authoring a 1998 law review article that argued Catholic judges should recuse themselves from certain death penalty cases because of the dilemma posed by the church’s opposition to capital punishment. In a 2012 blog post, a colleague on the Notre Dame Law School faculty quoted from a transcript of a talk in which Barrett allegedly said, a “legal career is but a means to an end … and that end is building the kingdom of God.”

Central to the emerging fight over Barrett’s faith is her membership in People of Praise, a tight-knit Christian group that fosters strong bonds between its members, who are mostly Catholic. Barrett’s father has served as a leader in the group, and Barrett served as a trustee of Trinity Schools, the group’s education arm, according to a disclosure she filed as part of her nomination to the federal bench in 2017.

The group, which was founded in 1971 in South Bend, Ind., describes itself as “a charismatic Christian community” that draws inspiration from early followers of Jesus’ teachings. Its members — who number an estimated 2,000 — promise to support each other spiritually and financially.

The group is part of a broader charismatic movement in Catholicism that emerged partly in response to the liberalizing reforms of Vatican II and embraced unmediated forms of spirituality. The People of Praise website cites faith healing and speaking in tongues as examples of practices in charismatic Christianity.

Some former members have complained that they found People of Praise sexist or overly controlling of members’ lives. They “describe an authoritarian atmosphere in which all of one’s life decisions — career, marriage, where to live and more — are controlled by the leaders or ‘heads,’” according to a 2018 article in the National Catholic Reporter.

In a 1993 article in the Bergen County Record, a People of Praise leader, Dan Decelles, said a branch of the group in Minneapolis had a problem with “unwarranted interference” in members’ lives in the 1980s, but the problem had been resolved.

Former member Coral Theill, who belonged to a branch of People of Praise in Oregon in the ’70s and ’80s, has taken to campaigning against the group, citing alleged abuse she endured as part of the experience. “I was humiliated and tortured and shunned and shamed,” she said. “The bottom line is the People of Praise community is about conformity and obedience of women.”

The group’s communications director, Sean Connolly, disputed the charge of sexism. “People of Praise recognizes that men and women share a fundamental equality as bearers of God’s image,” he wrote in an email. Citing the high volume of media inquiries, he did not immediately offer a response to the claims of former members.