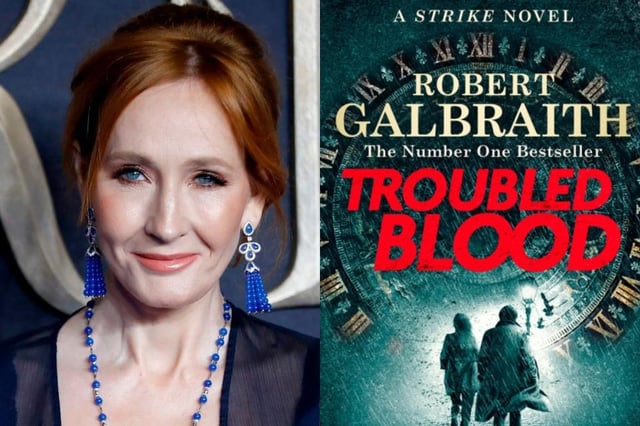 JK Rowling is embroiled in yet another trans row after it was revealed that the villain in her latest book is a male serial killer who dresses as a woman to slay his victims.

Troubled Blood – written under Rowling’s pseudonym Robert Galbraith – is set to be released on September 15 and will see detective Cormoran Strike work out what happened to missing GP Margot Bamborough.

He fears she fell victim to Dennis Creed, who has been dubbed a ‘transvestite serial killer’ for murdering his victims while wearing female clothing.

An early review of the 900-page book by The Daily Telegraph – in which the critic states the book’s ‘moral seems to be: never trust a man in a dress’ – sparked immediate backlash online.

Others said the book – which is not released until Tuesday – is not transphobic at all and over-eager detractors should read it before jumping to conclusions.

‘I can’t tell you why it is total sh*** without giving away the ending. So until you read it yourself, which you should, you will just have to trust me: this is total sh***.’

A Twitter user called Steve replied stating: ‘But when you combine it with all the negative stereotyping she’s done about trans women, it shows a clear pattern.

‘It’s not anti-trans as such but it does play into the fears that trans women are cis males looking to spy on women.’

Cohen replied: ‘Read the bloody book why don’t you?’

Piers Morgan added: ‘The fact #RIPJKRowling is trending says all you need to know about the woke brigade – they’re nastier and more viciously intolerant than anyone they preach about.’

In June, the Harry Potter author hit the headlines after she mocked an online article using the words ‘people who menstruate’ instead of ‘women’.