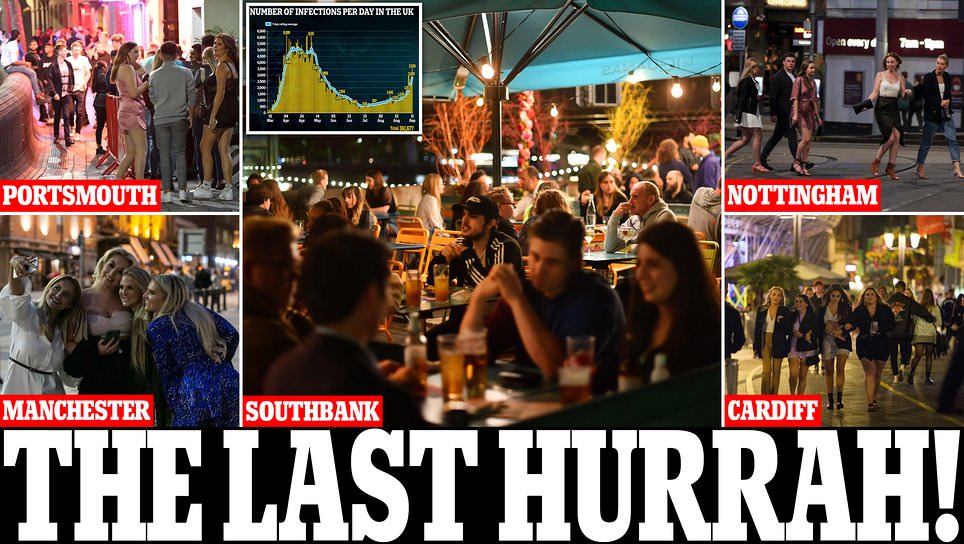 Drinkers flocked to pubs and bars across Britain last night for a final weekend of freedom before the Government’s tough new ‘rule of six’ comes into force next week.

Revellers gathered in busy beer gardens in London, Manchester and Nottingham en masse on Friday ahead of the tightening of lockdown rules in the UK from Monday.

Under Boris Johnson’s strict new measures, groups of more than six can be broken up by police who will be able to hand out £100 fines to those who flout the rules. This will double on each repeat offence up to £3,200.

Only schools, workplaces and a limited number of other locations will be exempt.

The latest measure introduced to tackle the spread of coronavirus comes as a Government-led study yesterday suggested the reproduction ‘R’ rate could be as high as 1.7 in England.

Health Secretary Matt Hancock said that the spike in infections justifies the Government’s new ‘rule of six’, warning people ‘the pandemic is not over’.

As hundreds of Britons enjoyed a final weekend of freedom, police bosses urged people to look after each other and avoid a ‘party weekend’ before the restrictions are implemented.

John Apter, national chairman of the Police Federation of England and Wales, said: ‘There is a real risk some members of the public will take advantage of the current situation and treat this weekend as a party weekend ahead of the tighter restrictions being introduced on Monday.

‘Alcohol and warm weather are not a good combination at the best of times. Using the current situation as an opportunity and excuse to party would be incredibly irresponsible and put pressure not only on policing, but potentially on the ambulance service and NHS.

‘We are in the grip of a deadly pandemic and we have seen cases increasing over recent weeks. Policing is under pressure like never before, but my colleagues will give enforcement notices if they feel it’s appropriate, and we make no apology for doing so.’

Elsewhere, would-be revellers were encouraged to stay home as Birmingham became the latest city to be hit with localised lockdown rules after the number of coronavirus patients being admitted to hospitals doubled in a week.

From Tuesday, more than 1.5million people in Birmingham and neighbouring Solihull and Sandwell will be banned from mixing with anyone outside of their own household in private homes, pubs, restaurants or in gardens.

Yesterday, police officers told the Telegraph they fear Britain will resemble the ‘last days of Rome’ after this weekend amid a storm of decadent planned pre-lockdown parties.

One officer, based in the north east of England, said: ‘We are worried this weekend is going to be like the last days of Rome.