The response was overwhelming: About 200 people signed up for the dioceses’ discussion circles.

Interest was just as strong in the Diocese of San Diego, where at least 11 congregations recently signed up to form Sacred Ground circles. And in Stevens Point, Wisconsin, the Rev. Jane Johnson started a discussion circle at her Episcopal-Lutheran congregation hoping at least a handful of people would join her. The circle widened to more than 60 participants from four local congregations and across the Diocese of Fond du Lac.

Such examples highlight the exponential churchwide growth in Sacred Ground participation since the May 25 police killing of George Floyd, a Black man, in Minneapolis, Minnesota, fueled widespread protests. Previously, about 400 discussion circles had taken up Sacred Ground from its launch in February 2019. Two months after Floyd’s death, that number doubled to more than 800 groups.

“The response has given me hope this is not going to be just a moment, but a movement,” Johnson told Episcopal News Service. “It’s sad that it takes so long to wake up to something … but we’re finally willing to do something.”

A discussion circle may sound like a rather passive form of action, especially in light of the fervent protests against recent instances of deadly police brutality. But Sacred Ground goes beyond a book club or Bible study, facilitators say. They describe some of the curriculum’s videos and reading assignments as intense and the conversations direct, even uncomfortable – all intended as a springboard for action.

“This is tricky stuff to navigate,” said Jenny Fife, an Episcopalian who organized a Sacred Ground circle this year in Roanoke, Virginia. Examples she cited from the curriculum include European Americans’ forced relocation of Native Americans, racial discrimination in 20th-century federal housing policy and the various barriers that made it difficult for Black World War II veterans to obtain G.I. Bill benefits. 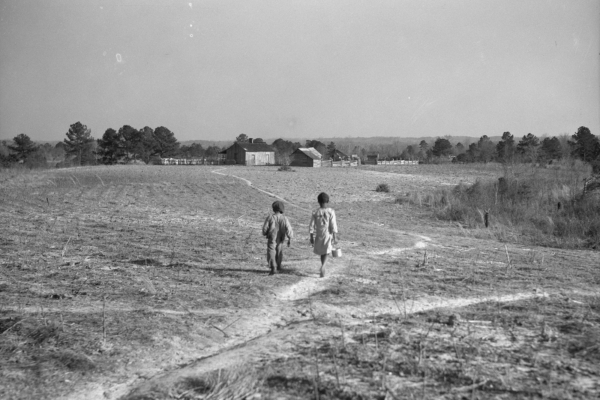 Children in 1937 walk along dirt paths connecting farm cabins on land once known as the Pettway Plantation in the isolated central Alabama community of Gee’s Bend. The Black families photographed by the Farm Security Administration were “living under primitive conditions,” and even today many of them, descendants of slaves, still bear the last name of the former plantation owner, Pettway. Photo: Arthur Rothstein, via Library of Congress

Sacred Ground is part of The Episcopal Church’s Becoming Beloved Community initiative on racial reconciliation. Unlike other anti-racism programs, Sacred Ground doesn’t require an experienced trainer, only volunteer facilitators. The curriculum is ready to go for any groups that commit to engage with the material and have honest and open conversations about what they learn. And though the curriculum doesn’t prescribe specific real-world responses, it presumes participants will be moved to work for social change in their own ways when they are done.

It also presumes most participants will be white. That is by design, said Katrina Browne, the “Traces of the Trade” filmmaker who developed the Sacred Ground curriculum: “written by a white Episcopalian for white Episcopalians.”

Episcopal Church leaders welcomed a new resource “targeting white folks to help with the kind of reeducation that we need,” Browne told ENS, “given how little we get taught in schools about the history of racism and the actual depth and extent of it.” Rather than exclusion, this approach encourages fair expectations: People of color are welcome to participate but shouldn’t feel obligated to explain racism to their white neighbors, Browne said.

“It’s very common in my experience for people of color to say, ‘It would be great for you all to learn more and not have us be the teachers all the time,’” she said. She also has found that well-meaning white people often don’t think they can talk about race without a person of color present, a common scenario in The Episcopal Church given its predominantly white membership. Sacred Ground encourages those Episcopalians not to let their congregations’ homogeneity stop them from increasing their own understanding of racism.

“Sacred Ground has clearly filled a deep need and hunger across the church and beyond. Especially among white folks, there is a growing recognition that racism is not just a problem for people of color,” the Rev. Stephanie Spellers, the presiding bishop’s canon for evangelism, reconciliation and stewardship of creation, said in a statement to ENS. “If anything, systemic racism has been built for white flourishing; that means it is best dismantled and addressed by white people.”

Fife’s experience with Sacred Ground in Roanoke is a common one. “It’s been pretty profound for me personally,” she said. “I’ve done a 180-degree turn.”

A self-described “child of the South,” Fife grew up in Richmond, Virginia, blind to the vestiges of white supremacy all around her in the one-time capital of the Confederate states, from the prominent monuments to Confederate figures to the slave owners and overseers in her own family tree. She was given the middle name, Lee, in honor of her grandfather, who had been named after Robert E. Lee, the Confederate general. 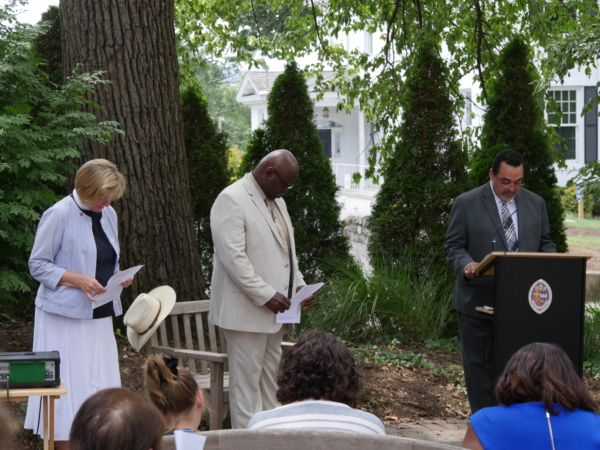 The Revs. Melissa Hays-Smith, Lyle Morton and
David Jones bow their heads in prayer at a
memorial service for lynching victims in Roanoke,
Virginia, during the second day of the Pilgrimage
for Racial Justice on Aug. 17, 2019. Photo: Egan
Millard/Episcopal News Service

She first learned about Sacred Ground from a woman she met in August 2019 while she and her husband participated in the Pilgrimage for Racial Justice organized by the Diocese of Southwestern Virginia. Fife then began developing a Sacred Ground circle at St. John’s Episcopal Church, and by the time the church hosted its first session in January 2020, more than 50 people had signed up from St. John’s and other Christian congregations around Roanoke.

Fife, a 67-year-old retired elementary school teacher, had considered herself a “typical liberal do-gooder,” but she soon realized how little she understood of systemic racism, the institutional systems and structures designed to disadvantage African Americans. She never had been challenged to go beyond a white perspective to reexamine the racial arc of American history.

“As a Christian, I believed that we were all made in the image of God. I just didn’t kind of get that there are two Americas. There’s Black America and there’s white America,” Fife said. “And I live in white America. And African Americans live in both Americas.” Institutional racism, she said, is “just so hard to see” – until it becomes obvious.