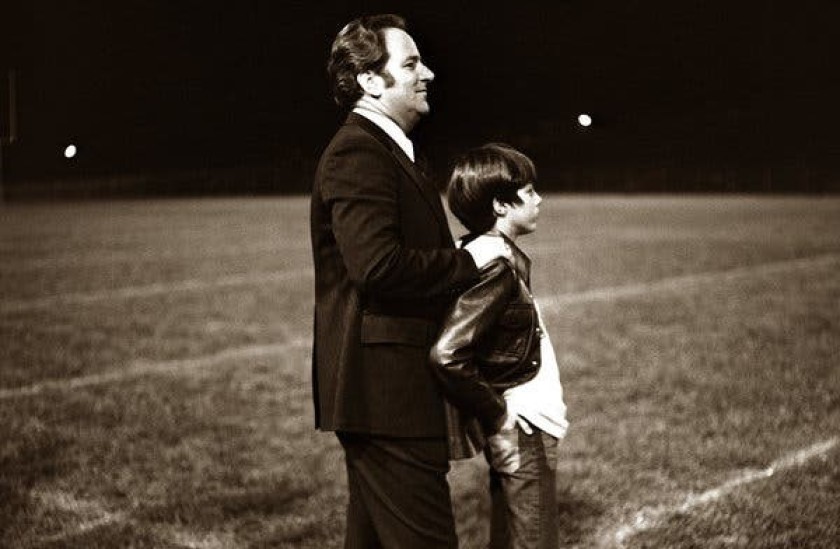 I’ve thought about this picture quite a bit over the last several hours. It was taken in 1973, when a young Jerry Falwell, Jr., attended one of Liberty University’s very first football games alongside his dad, Jerry Falwell, Sr.

I’ve thought about this picture a lot over the last several hours. It was taken in 1973, when Jerry Jr. attended one of @LibertyU‘s first football games with his dad, Jerry Sr. pic.twitter.com/r81ktJQa0f

So many people I know, including my mom, attended Liberty when Jerry Sr. was still alive. Each one of them speaks so fondly of the elder Falwell, his larger-than-life personality, his tender spirit, and his unwavering commitment to BHAGs (if you know, you know). Without his fervent prayers, immovable trust in the Lord, and uncompromising work ethic, Liberty wouldn’t be here today. Jerry Jr. had a front-row seat to all of that, where he watched — with his father’s hands on his shoulders — Liberty Mountain come alive.

As a student, I remember hearing so many people say, “I wish Jerry Sr. was alive to see this.” The truth is, he did see it; he saw Liberty’s success when no one else did. And he taught his oldest son to see it, too. For that, I will always be grateful. I’m thankful for the vision Jerry Jr. carried forward, for the work he did to make his father’s reality a reality for the rest of us. That nearly 50-year-old sepia photo reminds me of all I have to be grateful for.

Johnnie Moore, who served as a senior vice president and Liberty’s campus pastor when I was a student, told CBN News and Faithwire that Liberty “would not exist without the Falwells.” It has become so much more, though, in the years since its founding in 1971.

“The brilliance of its original mission and vision is that, long ago, it transcended the influence of them,” Moore continued, referring to the Falwell family. “Liberty is an institution designed to thrive for the cause of Christ today, and for generations. I am sure members of the community — past and present — will pray and will work together to ensure that Liberty’s best days are ahead.”

That old sepia-tone photo also reminds me of how susceptible we are to ourselves — how quickly we can fall if we take our eyes off the True Compass, Jesus. Our hearts are so deceitful (Jeremiah 17:9), we have to daily choose to put to death our fleshly desires (Colossians 3:5). And what a difficult task that is for all of us.

That’s why Liberty’s conduct code is what it is: a strict set of guidelines designed to help students live responsibly, pursuing choices in alignment with Scripture and reflective of the character of Jesus as we stumble, fall, walk, and run through this life, seeking an ever-deepening relationship with God.

The alleged behavior of Jerry Jr. and his wife, Becki, over the last seven years is heartbreaking. But their mistakes — shortcomings of which we are all capable — don’t overshadow my fond memories of Liberty and my deep admiration for the faculty, staff, and fellow students I met there.

I pray in the coming weeks, months, and years the Falwell family will find its footing again, that Jerry Jr. — regardless of what his future holds — will find his father’s vision once again. More than anything, I pray Falwell’s faith in Jesus is strengthened and restored and that those impacted by his choices find healing.

For now, I’m rooting for Liberty, praying for its interim president, Dr. Jerry Prevo, and the board of trustees. I’m praying for the current faculty, staff, and students navigating what Prevo described as a “stormy transition.” I’m praying, too, for David Nasser, Liberty’s campus pastor, as he leads so many during this time.

Jerry Sr. saw all Liberty Mountain would be. And I’m eager to see my alma mater continue its mission to “train champions for Christ” in the years to come.

In a statement released Tuesday afternoon, in the wake of Jerry Jr.’s resignation, acting board chairman Dr. Allen McFarland said this: “I am so encouraged by the unity of Christ that I saw exemplified by our board today. Liberty University’s future is very bright and in capable hands of leaders who are committed to being good stewards of what the Lord has entrusted!”

I could not agree with McFarland more.

“Therefore, since we are surrounded by such a huge crowd of witnesses to the life of faith, let us strip off every weight that slows us down, especially the sin that so easily trips us up. And let us run with endurance the race God has set before us.” — Hebrews 12:1