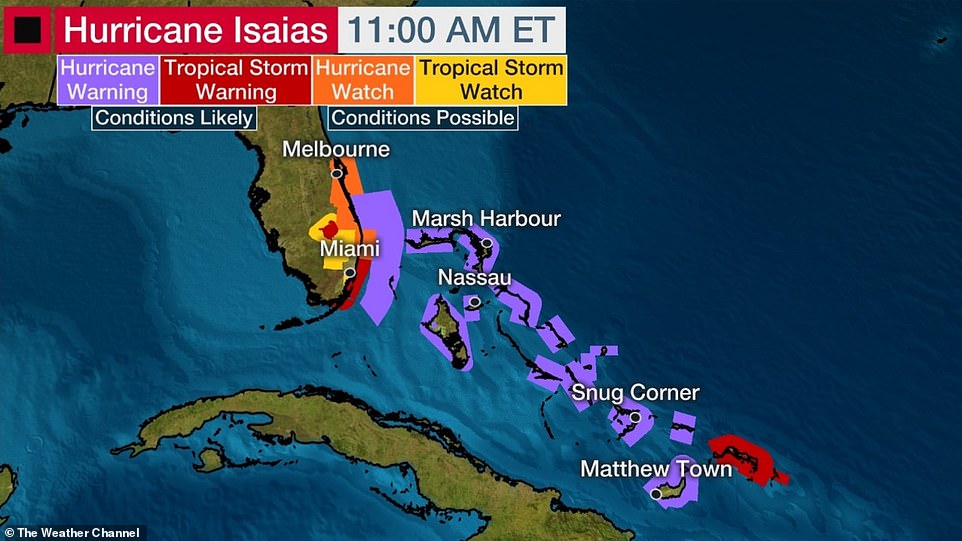 Forecasters declared a hurricane watch for parts of the Florida coastline on Friday as Hurricane Isaias drenched the Bahamas on a track for the U.S. East Coast.

Officials in Florida said they were closing beaches, marinas and parks in Miami-Dade County beginning Friday night. Mayor Carlos Gimenez said the county has 20 evacuation centers on standby that could be set up with COVID-19 safety measures.

‘We still don’t think there is a need to open shelters for this storm but they are ready,’ he said.

Isaias had maximum sustained winds of 75 mph (120 kph) Friday morning and it was expected to remain a hurricane for the next few days, according to the U.S. National Hurricane Center in Miami. It was centered about 295 miles (470 kilometers) southeast of Nassau in the Bahamas and was moving northwest at 16 mph (26 kph).

The Hurricane Center said heavy rains associated with the storm ‘may begin to affect South and east-Central Florida beginning late Friday night, and the eastern Carolinas by early next week, potentially resulting in isolated flash and urban flooding, especially in low-lying and poorly drained areas.’

‘While we can’t be certain of the exact track of the storm and we certainly cant be sure about the intensity it will ultimately reach, we do expect to see impacts to the state of Florida even if the storm remains off our shore, which is the current forecast, but this is an evolving situation so please keep up with official updates and make sure you have a plan and have seven days’ worth of food water and medicine,’ Gov. Ron DeSantis said, the Sun Sentinel reports.

Late Friday morning, hurricane watches went up from Boca Raton through Brevard County. It’s not expected to reach Category 2 strength by the time it reaches.

Palm Beach County could be the most impacted by the storm system, according to the National Weather Service.

“Due to the close approach of Isaias to the coast, a reasonable worst-case scenario at this time is for portions of coastal Palm Beach County to be impacted by sustained hurricane force wind late Saturday and Saturday night,” the weather service said in a statement issued late Friday morning. “There is also a reasonable worst case scenario for sustained high-end tropical storm force wind (58 mph or greater) elsewhere over metro and inland Palm Beach County, coastal and metro Broward County, and northeastern Miami-Dade County.”

However, the Weather Channel reports that it is still too early to determine the system’s future track and intensity regarding potential impact of weather to other parts of the United States.

It is also unclear how fast Isaias will move to the East Coast. It is expected to move northward and then head northeastward as the weekend goes into next week.