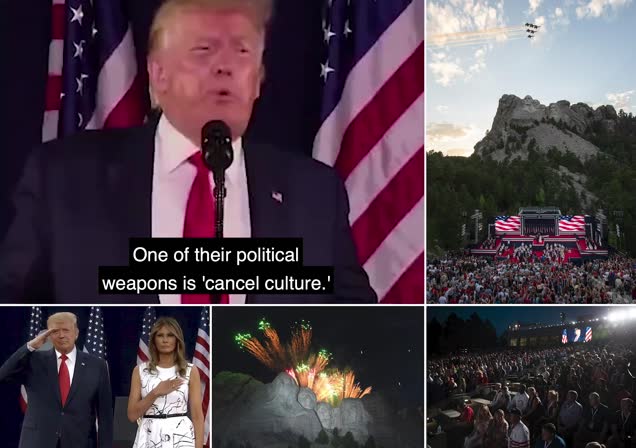 President Trump gave a fiery address at Mount Rushmore Friday night claiming that the ‘left-wing cultural revolution’ aimed to overthrow the American Revolution, painting a dark picture of the Black Lives Matter protests that have rocked the nation.

On the eve of the Fourth of July holiday, Trump’s message was about us versus them, calling those who didn’t support him ‘bad, evil people.’

He tossed red meat to a packed crowd of supporters – a majority of whom were not wearing masks nor practicing social distancing to prevent the spread of COVID-19 – telling them ‘we will never abolish the police’ and ‘we stand tall we stand proud and we only kneel to almighty God.’

And announced that he was creating a new monument, called the ‘national garden of American heroes,’ which he described as a ‘vast outdoor park that will features the statues of the greatest American who ever lived.’

Trump also vowed to deploy federal law enforcement ‘to protect our monuments, arrest the rioters and prosecute offenders to the furthest extent of the law.’

He promised Mount Rushmore, which loomed above him – and would serve as a backdrop for fireworks after his speech – would never be touched.

As the coronavirus crisis has continued to loom, the president has leaned into culture war themes, including the preservation of Confederate monuments, which have come under assault in the aftermath of George Floyd’s death and the subsequent ‘Black Lives Matter’ protests.

The White House has argued that if military bases and statues are renamed and removed, it will be a slippery slope to figures like George Washington, whose bust is on Mount Rushmore, being ‘erased.’ Washington was a slave-owner, as was Thomas Jefferson, who’s also on the South Dakota sculpture.

‘Angry mobs are trying to tear down statues of our founders, deface our most sacret memorials and unleash a wave of violent crime in our cities,’ he said during the speech.

‘Many of these people have no idea why they’re doing this, but some know exactly what they’re doing,’ he continued.

‘They think the American people are weak and soft and submissive,’ he said.

‘But no, the American people are strong and proud and they wll not allow our country and all of its values, history and culture to be taken from them,’ he said, raising his voice.

The president also took on ‘cancel culture,’ calling it ‘very definition of totalitarianism.’

He called the left’s version of history a ‘a web of lies.’

And talked about each of the presidents who loomed on Mount Rushmore over his head: George Washington, Thomas Jefferson, Abraham Lincoln and Teddy Roosevelt.

‘No movement that seeks to dismantle these treasured American legacies can possibly have a love of America at its heart’ he said.

Black Lives Matter protesters have focused on tearing down statues, mainly of Confederate figures, because of their links to white supremacy.

The president has latched on to the destructive part of the movement – and liberals calls to ‘defund the police’ – to craft a message palatable to his predominantly white base.

During the speech he mentioned the contributions of black Americans too – including Harriet Tubman, Muhammad Ali and Louis Armstong.

He also paid tributes to Americans with a more checkered past, including President Andrew Jackson, who sent Native Americans off on the Trail of Tears.

Trump also touted that the person who vandalized the Jackson statue in Lafayette park had been found.

The event kicked off with patriotic tunes, flyovers and messages from servicemembers from South Dakota.

Former press secretary Sarah Huckabee Sanders and her family were also on hand.

Kim Guilfoyle, the girlfriend of President Trump’s son Donald Trump Jr., who holds a position with the campaign, tested positive for the coronavirus in South Dakota ahead of Friday night’s festivities, DailyMail.com confirmed.

Donald Trump Jr. tested negative. Eric Trump and Lara Trump were spotted in the audience at the event.