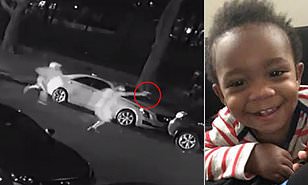 The 10-second clip, tweeted Tuesday by NYPD Chief of Detectives Rodney Harrison, shows two men firing off multiple rounds as they run across Madison Street outside of Raymond Bush Playground in Bedford-Stuyvesant late Sunday, seemingly pursuing a group running ahead of them.

One of those rounds fatally hit little Davell in the stomach while he was out with his family around 11:30 p.m.

Three others were also struck and wounded by the gunfire.

The NYPD is offering a $10,000 reward to anyone with information that leads to the arrests of the gunmen.