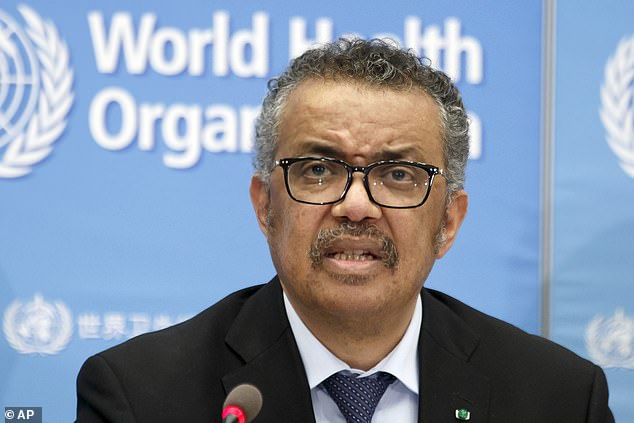 The coronavirus pandemic is ‘easily the most severe’ emergency that the WHO has ever declared, the agency said today as global cases surged past 16million.

The global tally has risen by a million in just four days, led by massive outbreaks in the United States, India and Brazil which are each piling up tens of thousands of new cases per day.

South Africa is also seeing more than 10,000 new cases a day while places such as Spain, Belgium and Hong Kong are facing second waves of the disease.

WHO chief Tedros Adhanom Ghebreyesus said the number of cases had doubled in just six weeks as he warned today that ‘the pandemic continues to accelerate’.

However, while cases have been surging at record levels, global deaths have remained stagnant at around 30,000 to 40,000 per week.

Speaking nearly six months after the WHO first declared a global health emergency, Tedros said scientists were ‘still learning’ about how to tackle the virus.

‘This is the sixth time a global health emergency has been declared under the International Health Regulations, but it is easily the most severe,’ he said.

‘Almost 16million cases have now been reported to WHO, and more than 640,000 deaths,’ he said before cases did cross the 16million threshold.

‘And the pandemic continues to accelerate. In the past six weeks, the total number of cases has roughly doubled.’

When the health emergency was declared on January 30 there were fewer than 100 cases outside China, Tedros said.

According to WHO figures, the world passed one million confirmed cases on April 4, by which time much of the West was in lockdown.

The world reached five million cases on May 23 – 114 days after the declaration of the health emergency – but the next five million took only 36 days until June 28.