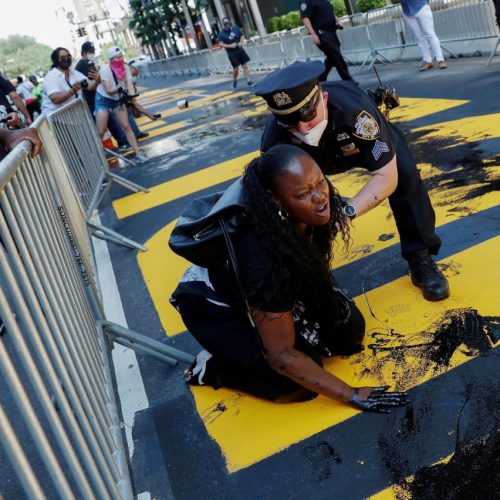 A black Christian activist poured black paint over New York City’s Black Lives Matter mural in front of Trump Tower in New York City on Saturday, after she was released from police custody she struck again only a few hours later this time pouring paint over the BLM murals in Harlem and Brooklyn.

Bevelyn Beatty, a Christian woman and activist with “At the Well Ministries,” wore a T-shirt that said “Jesus Matters” and repeatedly called for the refunding of police departments while spreading black paint on the leftist slogan, according to an Instagram video she posted of the encounter.’

Beatty, of Staten Island, was arrested and charged with criminal mischief but was free just hours later — before promptly going back to work, the NY Post reported.

A second video posted to her Facebook page, titled “Harlem Drive By Painting,” shows Beatty and her crew pouring paint out of the back of the same minivan as it rolls over the mural at 7th Avenue and West 125th Street.

Among conservative and the more enlightened circles, Beatty has become an instant folk hero. Several people set up “Go Fund Me” pages for her ministry. In an act of politically correct capitulation, “Go Fund Me” shut down the validated fundraiser, which they claim, “violated terms”. The violation must have been not supporting the dangerous, separatist, Anti- American, Anti-Israel, racist, Marxist entity called “Black Lives Matter”. In these times of Marxist insurrection, the peaceful are the villains who are “violating terms and conditions”. Supporting the police, America, faith, family and “all lives” is considered a “violation” in an upside world.

Beatty has become the more vocal of the small group which includes her friend Edmee Chavannes. She posted on Facebook, that while in police custody, they were treated like loyalty and had a great experience, as they were arrested. She said in the posting, the police showed great appreciation for what she is doing and are terrified for the future of NYC, much as Beatty and her members of her ministry are.