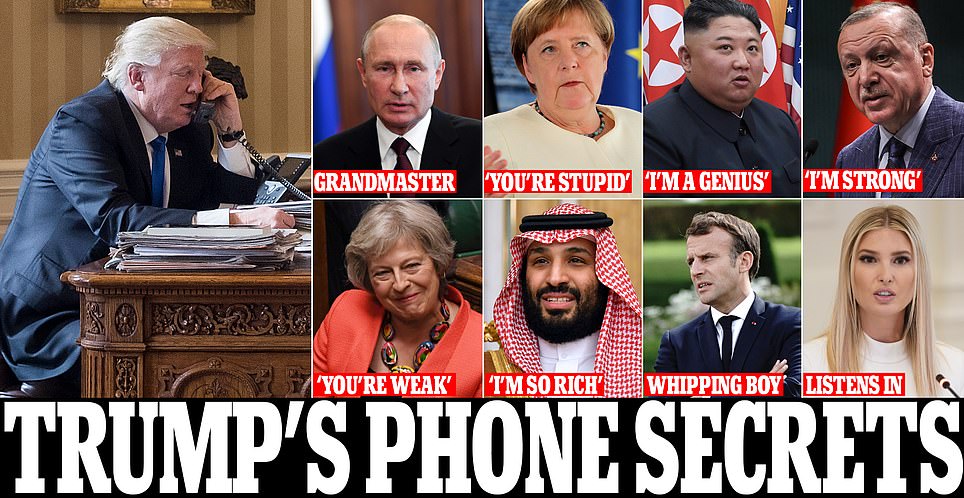 President Donald Trump’s private calls with Russian President Vladimir Putin sometimes have the tone of ‘two guys in a steam bath,’ according a bombshell account that portrays Trump as bending over backward to win the strongman’s approval.

Putin ‘just outplays’ Trump during their one-on-one interactions, according to a CNN report published Monday by legendary Watergate reporter Carl Bernstein. During those calls and others with foreign leaders, Trump regularly tries to tout his own wealth and success in conversations which his own aides regarded as ‘delusional’, according to the report.

At the same time, with Putin he routinely characterizes his predecessors as ‘imbeciles’ and weaklings.’

Trump also told Britain’s then prime minister Theresa May she was ‘weak’ and called German leader Angela Merkel ‘stupid’ to her face in a series of ‘demeaning’ encounters with female leaders, the report claims.

The revelations about the calls are contained in a deeply sourced – though thinly quoted – account by legendary Watergate journalist Carl Bernstein.

The conversations with Putin are part of a web of Trump calls to the leaders of Australia, Turkey, Canada, Australia and western European countries during his presidency that officials who see call transcripts describe as ‘abominations.’

In the case of Russia, one source voiced fears that Trump was squandering the ‘advantage that was hard won in the Cold War’ by craving Putin’s approval.

Bernstein said that if the notes and transcripts of the calls were made public, even some of Trump’s Republican allies in Congress would struggled to defend him.

Daniel Goldman, a House lawyer during the Trump impeachment inquiry, said officials had gone to the media with their concerns rather than through the ‘proper channels’ after Trump attacked the whistleblower who first drew attention to the Ukraine scandal.

‘When you take away the proper route through vindictive retribution, you cannot then complain about leaks,’ Goldman said.

Trump won office in 2016 despite media criticism of his repeated praise for Putin, even as Russia was revealed by U.S. intelligence to be orchestrating an election interference and hacking campaign.

In addition to repeatedly building up his own wealth, as he has done repeatedly in public, Trump would revel in his time running the Miss Universe pageant in Moscow, according to the account.

Trump had touted a meeting with Putin at the event, although it evidently never happened.

A source trashed the calls, saying that while Putin destabilizes the West, Trump ‘sits there and thinks he can build himself up enough as a businessman and tough guy that Putin will respect him.’

The report came out Monday, days after the New York Times reported that Trump was briefed on intelligence that Moscow had paid a bounty to Taliban elements for killings of American soldiers.

The White House on Monday denied Trump was briefed about the reported program.

Trump was described as solicitous of Putin in the calls. Putin is known as a crafty former KGB operator who often holds back in televised encounters with counterparts.