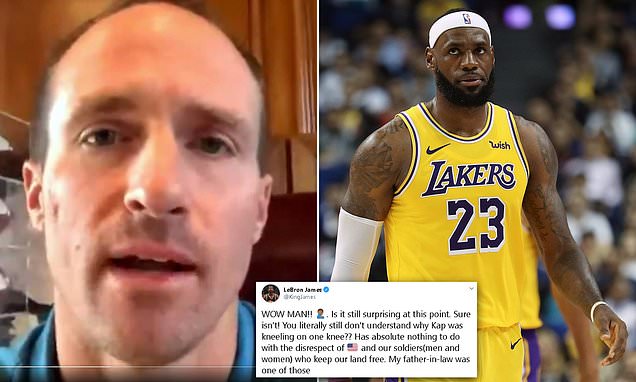 Los Angeles Lakers star LeBron James (right) has slammed Drew Brees’s claim that athlete protests during the national anthem are disrespectful to the military, saying the New Orleans Saints quarterback is misinterpreting the peaceful demonstrations that began in the NFL with Colin Kaepernick in 2016. Both Brees (left) and James have maintained their long-held respective opinions on the subject of player protests amid uproar over the death of George Floyd, an unarmed black man, at the hands of Minneapolis police last week. When asked on Wednesday about the possibility of more player protests in the NFL next season, Brees told Yahoo Finance he will ‘never agree with anybody disrespecting the flag of the United States of America or our country.’ Kaepernick began protesting inequality and racist police brutality as a member of the San Francisco 49ers by refusing to stand for the national anthem throughout the 2016 season. Initially Kaepernick sat during the anthem until Nate Boyer, a former Green Beret, suggested he kneel so that he could be closer to his teammates instead of sitting on a distant bench. While Brees has refused to accept that protest as acceptable, James insists it had nothing to do with disrespecting the flag, country, or military.