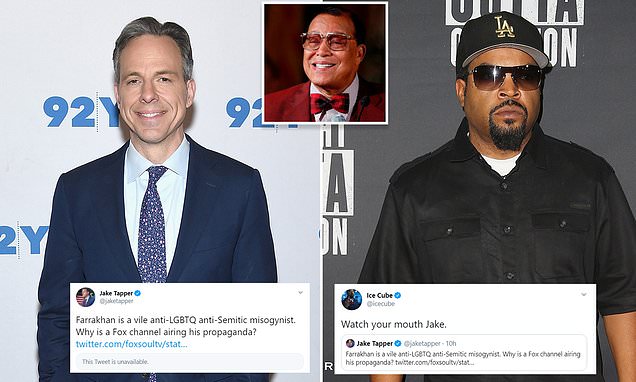 CNN host Jake Tapper was told to ‘watch your mouth’ by rapper Ice Cube after he called Louis Farrakhan, the leader of the Nation of Islam, ‘a vile anti-LGBTQ anti-Semitic misogynist.’

Tapper’s full tweet read: ‘Farrakhan is a vile anti-LGBTQ anti-Semitic misogynist. Why is a Fox channel airing his propaganda?’

The tweet came after the Fox Soul network, a streaming channel, said it would be airing Farrakhan’s Message to America later this week.

Nation of Islam is an African American political and religious movement.

The rapper was criticized this month for sharing a number of Twitter posts which appeared to be anti-Semitic.

‘It is hard to give Ice Cube the benefit of the doubt given the fact that his anti-Semitic activities have extended beyond the realm of the internet,’ wrote Marlow Stern of the The Daily Beast.

‘He’s an ardent supporter of Louis Farrakhan, one of the world’s most prominent anti-Semites, and, most troubling of all, the rapper and actor was accused in May 2015 of ordering his entourage to beat up a rabbi.’

Farrakhan has a history of hateful rhetoric. In 2018, he compared Jews to termites and during a conversation with students in Iran he was criticized after he defended the phrase ‘death to America’.