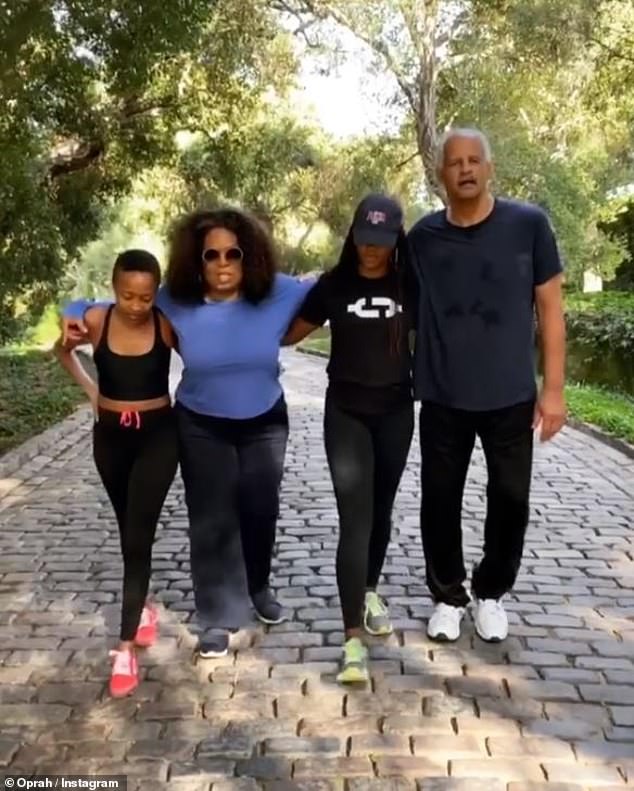 Oprah Winfrey has walked a symbolic 2.26 miles to mark Ahmaud Arbery’s 26th birthday in a heartfelt video posted to Instagram.

Arbery, a 25-year-old unarmed black jogger who was shot and killed allegedly by a white father and son ‘vigilante’ team.

Gregory McMichael, 64, and his son Travis McMichael, 34, were arrested on Thursday and charged with murder and aggravated assault for the shooting death of Arbery in Brunswick, Georgia.

The killing happened in February but the pair were only charged after footage of the attack was leaked online on Tuesday sparking outrage across America.

‘Today would’ve been Ahmaud Arbery’s 26th birthday. But he’s not here to celebrate because he was senselessly shot and killed doing something to make his life healthier and stronger. He went out for a jog while being Black. I wonder what was he thinking in those last seconds of his life?,’ Oprah wrote in the Instagram post which has been viewed 3.5 million times.

‘Unimaginable to go for a run in 2020 and end up dead because of the color of your skin. I spoke with his mom Wanda yesterday who says she feels better now that the two men have finally been arrested. But they were only arrested because WE saw the video. Today people everywhere walked 2.23 miles in the name of Ahmaud and justice. We did 2.26 in honor of his 26th birthday,’ she continued.

People around the country are dedicating their daily jog or walk to him and posting about it on social media with the hashtags #RunWithMaud and #IRunWithMaud.

The distance signifies the date he was killed, February 23.