A Fox News senior meteorologist who lost parents-in-law to the coronavirus blames New York Governor Andrew Cuomo for their deaths and was outraged to see him laugh it up with his younger brother, Chris, on CNN earlier this week.

Janice Dean told Fox News on Thursday that she felt compelled to speak out after the governor appeared on CNN, where Chris Cuomo teased his older sibling for having a large nose.

During Wednesday’s episode of Cuomo Prime Time the governor recounted how he was tested for coronavirus on live TV during his daily press briefing on Sunday, leading his brother to joke he had a big nose and required a baseball bat-sized nasal swab for a test.

But not all viewers were laughing over the brotherly banter, particularly after it was revealed that a New York State directive requiring nursing homes to accept COVID-19 patients discharged from the hospital led to outbreaks and thousands of deaths.

Many also found the segment inappropriate given the fact that New York State has by far the highest number of COVID-19 cases and deaths in the United States.

“Is it true… this was the actual swab that was being used to fit up that double barreled shotgun that you have mounted on the front of your pretty face?”

.@ChrisCuomo and his brother NY Gov. Andrew Cuomo share a light a moment over the governor’s televised coronavirus test. pic.twitter.com/ETcnPkTjqV

Dean, a Fox News meteorologist, appeared on Tucker Carlson’s prime time show on Thursday and blasted the governor after both of her parents-in-law died at a nursing home in New York State.

Dean said that her mother- and father-in-law, Michael and Dolores Newman, both died of COVID-19 after they were exposed to the virus in nursing homes.

Her father-in-law, Michael, an Air Force veteran and former New York City firefighter, was placed in a nursing home after it became apparent he was suffering from dementia.

Dean said that she and her husband were notified a week before Michael’s death that the nursing home was moving him to another floor.

‘I believe that floor was used for recovering COVID patients,’ Dean said. ‘I can’t prove that. We can’t get any confirmation on any of this.’

Dean said her husband was notified that his father died just three hours after he was told that he wasn’t feeling well. She said the death certificate listed COVID-19 as cause of death.

The meteorologist said her mother-in-law, Dolores Newman, was rushed to the hospital two weeks later and died of COVID-19.

The Newmans were married for 59 years.

DailyMail.com has reached out to Fox News and Dean seeking the name of the nursing home and other details to support her claims.

Dean told Carlson she agreed to be interviewed after she was outraged to see the Cuomo brothers laughing on CNN amid reports that the governor’s administration put in place a policy on nursing homes that critics say resulted in thousands of deaths.

‘I have not seen the coverage of this,’ Dean told Fox News.

‘Twenty per cent of our lost loved ones are from nursing homes … because Governor Cuomo and several other governors forced COVID-recovering patients into nursing homes.’

Dean said: ‘The fact that I am seeing, last night, him … making fun, inappropriate jokes and insensitive jokes, cruel jokes … make no mistake.

‘I am glad that Chris Cuomo has recovered from COVID because he apparently did have it.

‘And I’m glad that their family is well, but my family is not well.

‘And that is not something to joke about.’

DailyMail.com has reached out to CNN and Governor Cuomo for a response.

Others on social media also reacted strongly to the segment.

Ross Barkan blasted CNN, calling it an ‘entertainment network with a news apparatus attached to it.’

Barkan faulted CNN for failing to challenge the governor for COVID-19 deaths in New York State.

‘I thought this stuff was serious!’ tweeted Matthew Briggs. ‘Isn’t that what the left says?’

‘He can’t run from letting over 5,600 elderly souls in nursing homes perish with this virus.’ 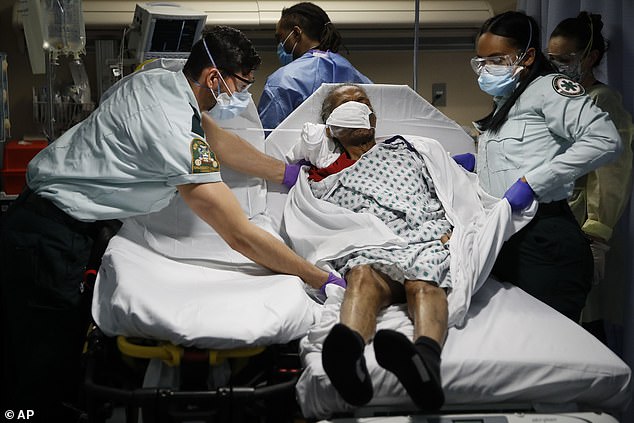 Lisa Fleming called the Cuomos ‘a disgrace to our country.’

She tweeted: ‘The people sent to their deaths at nursing homes aren’t laughing.’

‘Instead of asking his brother (the governor) why he decided to pack COVID patients into nursing homes, killing untold amounts of people, Chris Cuomo pulled out an oversized, prop cotton swabs to mock how big his brother’s nose was,’ tweeted Nicholas Fondacaro.

‘This is the state of “journalism” on CNN. Pathetic’

House Rep. Elise Stefanik, a Republican member of Congress who represents New York State’s 21st congressional district, tweeted: ‘This week, many families across New York State have reached out to share their heartbreaking stories of losing loved ones in nursing homes.

The Associated Press on Friday found that more than 4,300 recovering coronavirus patients were sent to New York’s already vulnerable nursing homes under a controversial state directive that was ultimately scrapped amid criticisms it was accelerating the nation’s deadliest outbreaks.

AP compiled its own tally to find out how many COVID-19 patients were discharged from hospitals to nursing homes under the March 25 directive after New York’s Health Department declined to release its internal survey conducted two weeks ago. It says it is still verifying data that was incomplete.

Whatever the full number, nursing home administrators, residents’ advocates and relatives say it has added up to a big and indefensible problem for facilities that even Cuomo — the main proponent of the policy — called ‘the optimum feeding ground for this virus.’

‘It was the single dumbest decision anyone could make if they wanted to kill people,’ Daniel Arbeeny said of the directive, which prompted him to pull his 88-year-old father out of a Brooklyn nursing home where more than 50 people have died.

His father later died of COVID-19 at home.

‘We knew the most vulnerable – the elderly and compromised – are in nursing homes and rehab centers.’

Told of the AP’s tally, the Health Department said late Thursday it ‘can’t comment on data we haven’t had a chance to review, particularly while we’re still validating our own comprehensive survey of nursing homes admission and re-admission data in the middle of responding to this global pandemic.’

Cuomo, a Democrat, on May 10 reversed the directive, which had been intended to help free up hospital beds for the sickest patients as cases surged.

But he continued to defend it this week, saying he didn’t believe it contributed to the more than 5,800 nursing and adult care facility deaths in New York – more than in any other state – and that homes should have spoken up if it was a problem.

‘Any nursing home could just say, “I can’t handle a COVID person in my facility”,’ he said, although the March 25 order didn’t specify how homes could refuse, saying that ‘no resident shall be denied re-admission or admission to the (nursing home) solely based’ on confirmed or suspected COVID-19.

Over a month later, on April 29, the Health Department clarified that homes should not take any new residents if they were unable to meet their needs, including a checklist of standards for coronavirus care and prevention.

In the meantime, some nursing homes felt obligated and overwhelmed. 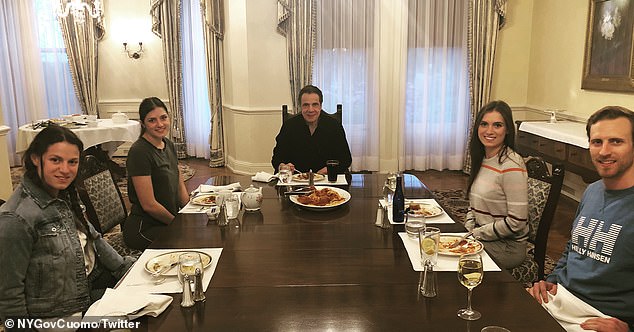 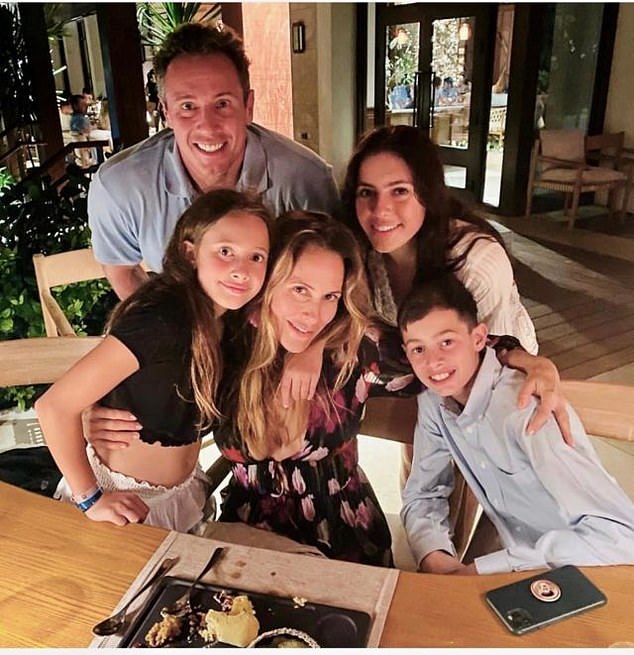 Gurwin Jewish, a 460-bed home on Long Island, seemed well-prepared for the coronavirus in early March, with movable walls to seal off hallways for the infected.

But after the state order, a trickle of recovering COVID-19 patients from local hospitals turned into a flood of 58 people.

More walls were put up, but other residents nonetheless began falling sick and dying. In the end, 47 Gurwin residents died of confirmed or suspected COVID-19.

‘We can’t draw a straight line from bringing in someone positive to someone catching the disease, but we’re talking about elderly, fragile and vulnerable residents.’

The Society for Post-Acute and Long-Term Care Medicine, known as AMDA, had warned from the beginning that Cuomo’s order admitting infected patients posed a ‘clear and present danger’ to nursing home residents.

Now, Jeffrey N. Nichols, who serves on the executive committee of the group, said ‘the effect of that order was to contribute to 5,000 deaths.’

Nationally, over 35,500 people have died from coronavirus outbreaks at nursing homes and long-term care facilities, about a third of the overall death toll, according to the AP’s running tally.

Cuomo has deflected criticism over the nursing home directive by saying it stemmed from Trump administration guidance.

Some states went in the opposite direction. 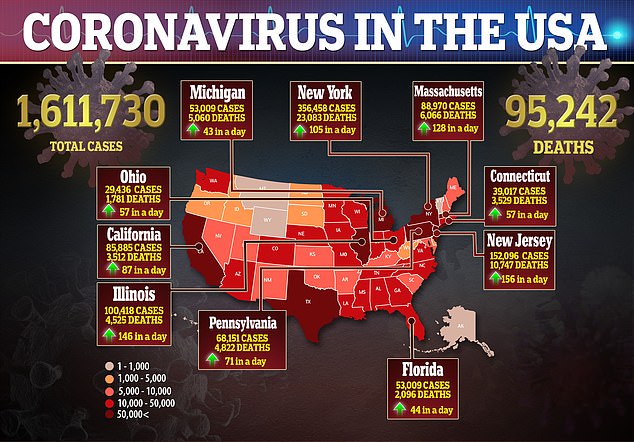 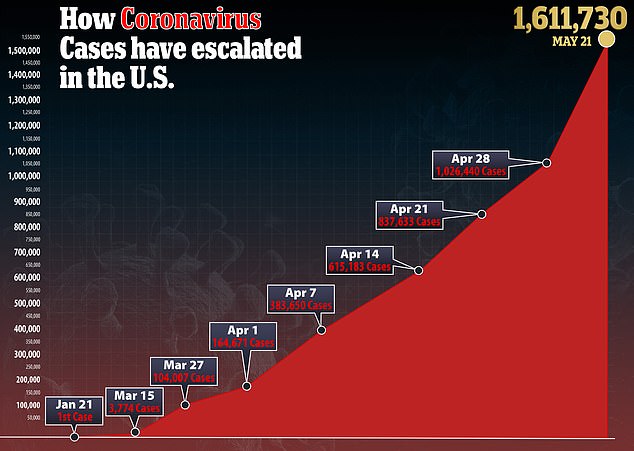 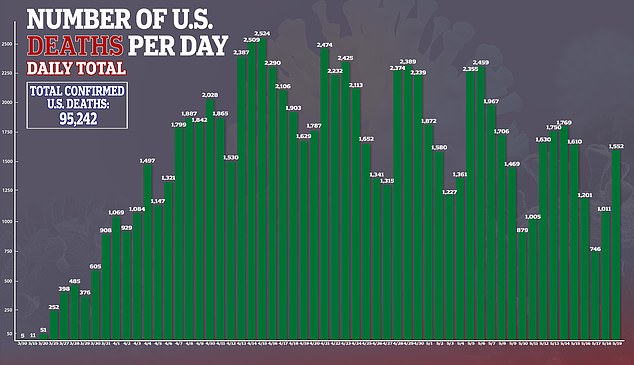 Louisiana barred hospitals for 30 days from sending coronavirus patients to nursing homes with some exceptions.

And while Louisiana reported about 1,000 coronavirus-related nursing home deaths, far fewer than New York, that was 40 per cent of Louisiana’s statewide death toll, a higher proportion than in New York.

New York’s Health Department told the AP May 8 it was not tracking how many recovering COVID-19 patients were taken into nursing homes under the order.

But it was at that very moment surveying administrators of the state’s over 1,150 nursing homes and long-term care facilities on just that question.

Those survey results have yet to be released.

But regardless, the Health Department said, the survey had no bearing on Cuomo’s announcement May 10 that “we’re just not going to send a person who is positive to a nursing home after a hospital visit.”

Cuomo said such patients would be accommodated elsewhere, such as sites originally set up as temporary hospitals.

To some, the governor’s reversal came too late.

‘It infected a great number of people in nursing homes who had no business getting infected, including short-term residents who were there for rehabilitation after surgeries,’ said John Dalli, a New York attorney who specializes in nursing home cases.

To be sure, incoming residents weren’t the only possible source of infection.

Some homes believe a bigger contribution came from staffers and residents unaware they had the virus.

And some say they would have taken on COVID-19 patients regardless of the state’s order.

‘There were nursing homes that realized that there was a void,’ said Sarah Colomello, a spokeswoman for Thompson House in Rhinebeck.

The 100-bed facility set up an isolated unit where affiliated hospitals nearby have sent at least 21 patients.

It has reported no deaths.

Cuomo administration officials say the original directive came when the governor feared the hospital system would be overwhelmed and was focused on creating as much hospital space as possible.

That was welcomed by one of the many hospital systems and nursing homes surveyed for AP’s count.

Northwell Health said three of its medical centers were so overtaxed at one point they had to put some ICU patients in hallways.

‘Suffice it say, our hospitals were under stress,’ spokesman Terence Lynam said. 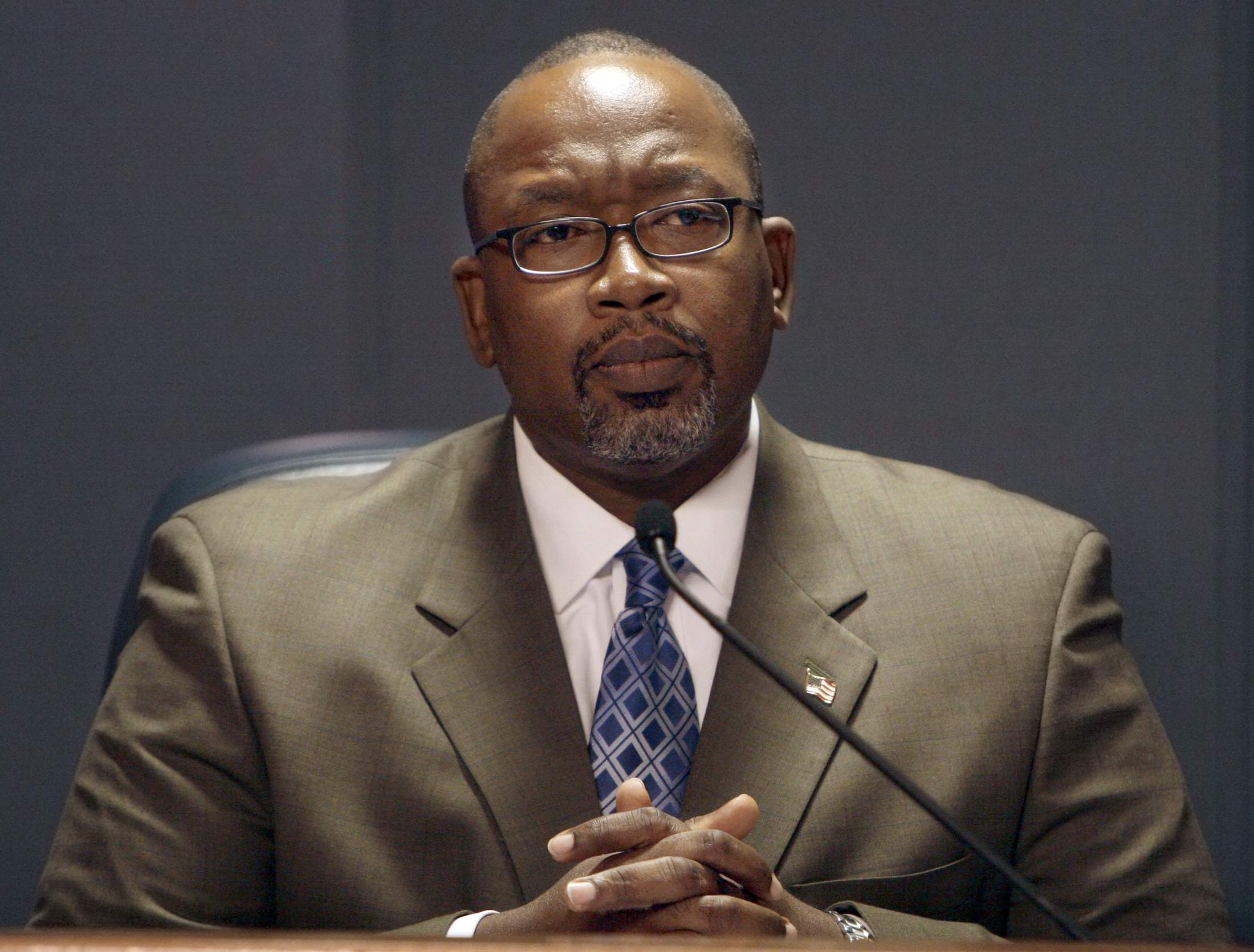