In the days before the novel coronavirus, the thought that every church, synagogue and mosque in the Holy Land would be ordered shut was simply unimaginable.

Yet that is today’s reality.

On Wednesday (March 25), the Israeli government instituted a nearly complete COVID-19 lockdown that includes the closure of all houses of worship. The directive permits 10 worshippers to pray outdoors, provided they stand at least 6 feet apart.

The day before, the Ministry of Health revealed that 24% of infected Israelis had contracted the virus in synagogues. Another 5% were exposed in yeshivas.

In the West Bank, the Palestinian Authority shuttered all mosques and churches, including the Church of the Nativity, weeks ago after an outbreak of the virus in Bethlehem, the traditional birthplace of Jesus and the territory’s most visited site.

Mosques and churches in Gaza, ruled by Hamas, are also closed to worshippers.

Although communal religious practice is being curtailed around the world in an attempt to thwart the virus’s spread, the limitations on communal prayer, coupled with the total collapse of religious tourism before Passover, Easter and Ramadan, is hitting the Holy Land particularly hard.

“It’s an extremely difficult time for families because Easter is high season,” said Wadie Abunassar, an adviser to and spokesman for church leaders in the Holy Land. “But what can we do? Even the Vatican is closed. We are not unique. Health must come first.” 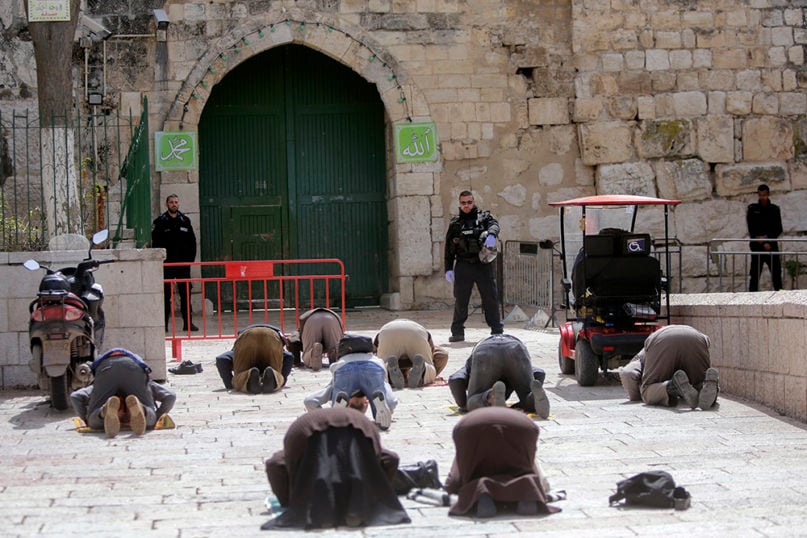 People pray on March 23, 2020, in front of the shuttered gates of the Al-Aqsa Mosque compound, as all houses of worship are closed to prevent the spread of coronavirus in Jerusalem. (AP Photo/Mahmoud Illean)

In Israel, religious tourism is also nonexistent, and hotels are empty or being used to quarantine patients who have tested positive for the virus. Citizens have been told to hold their Passover Seder at home, with only their nuclear family. Many single people may be spending the holiday alone.

In a move that has angered some Jewish women, rabbinical authorities have insisted that women’s mikvehs, or ritual baths, remain open.

According to Jewish law, a married woman cannot have sexual relations with her husband until she is ritually cleansed in a mikveh after menstruating or childbirth.

“As long as the government is neither regulating nor enforcing its own sanitation protocols in the state-operated mikvaot, it is a public health hazard to keep them open. When state religious bodies act as though they are above the law, not only does it endanger our democracy; in this case, it endangers our very lives,” said Rachel Stomel, director of English communications at the Center for Women’s Justice.

Although the health directives are deeply disruptive, they are also fostering out-of-the-box solutions to religious quandaries, said Rabbi David Rosen, director of the American Jewish Committee’s Department of Interreligious Affairs.

“People are attempting to deal with the situation in creative ways. It’s actually quite remarkable. The virus is engendering community support and spiritual inspiration across religious divides around the world,” Rosen said.

In a controversial move, a group of prominent Israeli Sephardi rabbis ruled that it is permissible for elderly grandparents stuck at home to participate in their family’s Seder using Zoom and other internet-based solutions.

Some worry that this ruling will hurt synagogue attendance once the crisis has passed.

“Well-intentioned rabbis may think they are permitting something on a temporary basis, but the implications could be far-reaching,” Rabbi Seth Winberg wrote in a Jerusalem Post op-ed. “After we flatten the curve … will it not seem more convenient to log in from home?”

The vast majority of rabbis have yet to endorse virtual minyans, however, so neighbors are organizing daily prayers (including the mourner’s kaddish), weddings, circumcisions and bar mitzvahs on home balconies, in their backyards or on the street. 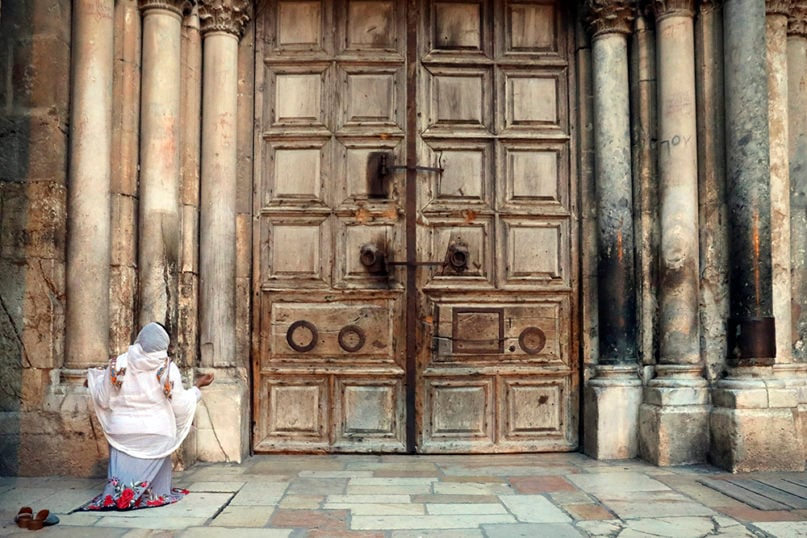 A woman prays March 25, 2020, in Jerusalem in front of the closed Church of the Holy Sepulchre, a place where Christians believe Jesus Christ was buried, as Israel tightens its measures to fight the spread of the coronavirus. (AP Photo/Mahmoud Illean)

Despite being in self-imposed quarantine after a trip abroad, Ellen Berkman Amzallag managed to recite the mourning blessing for her late father, who died 10 years ago, with a minyan thanks to the quorum of men who recited prayers outside her Jerusalem home.

“I was able to say kaddish from my living room while 10 men, including one son, were praying outside. My son in quarantine was in the room with me,” Amzallag said.

Even with these innovations, the stringent coronavirus regulations are painful for Israeli and Palestinian couples marrying in the absence of beloved relatives, and families burying their loved ones.

When Razi Yitzchak died on March 17, his wife and adult children needed to alter their Jewish mourning practices due to the coronavirus.

Only a small group of mourners was permitted at the funeral, in keeping with Israel’s COVID-19 guidelines against people congregating.

The burial society kept mourners 12 feet away from Yitzchak’s body out of concern for the health of the gravediggers. After the mourners slashed their clothes with a knife – as is customary in Judaism – the burial society disinfected it in alcohol. Furthermore, the mourners weren’t allowed to shovel soil into Yitzchak’s open grave because the shovels would be difficult to sanitize.

“It is hard to be in this mourning status, with all our rich traditions, built-in and ready to go but instead of following them, posting them on Facebook instead,” Yitzchak’s son Shaiel wrote during the seven-day shiva period, which is ordinarily a time when people come to comfort the mourners in person.

Instead, friends conveyed their condolences via phone calls and social media.

“It would never have been easy to bury our father,” Shaiel said. “But this kind of funeral, though, was really, really hard. No hugging. No touching. So few people.”

“It is compatible with Shariah, which commands us to save lives.”

But it is still unsettling, especially because Ramadan – a time of communal prayer, fasting and break-fasts, will begin in late April.

“It’s very heavy for me. As someone who is used to praying in a mosque every day I feel something is missing. But Allah asks us to protect ourselves and not to put ourselves or others in danger. That takes priority,” Zahalka said.