Sports are on hold, theaters are closed and so are amusement parks, a disaster-movie scenario that has Hollywood reeling. But Americans held captive at home by the coronavirus can turn to Netflix, Amazon, Hulu and other streaming services, outliers in an entertainment industry brought to an unprecedented standstill.

The recent launch of Disney and Apple services and the upcoming arrival of NBCUniversal’s Peacock and WarnerMedia’s HBO Max unleashed speculation about winners and losers in an increasingly crowded field. With self-imposed or required isolation the abrupt reality, emerging and niche streamers could draw new subscribers — gains that may even outlast the coronavirus crisis.

The viral outbreak “has caused so much pain across industries globally,” said Dan Ives, an analyst with Wedbush Securities. “Yet on the streaming side, the demand for those services is going to increase exponentially over the next three to six months” as consumers around the world remain stuck in place.

Up to a 20 percent increase is likely in the amount of time subscribers spend watching streamed fare, and millions of new customers will hop aboard worldwide, Ives predicted.

IMPACT ON THE ECONOMY:

Streaming companies are reacting to the moment in varied ways, but always carefully. Media companies want to be seen as good citizens who are serving up an antidote to anxiety over the virus and housebound boredom, not capitalizing on a disaster.

For most people, the coronavirus causes only mild or moderate symptoms, such as fever and cough. For some, especially older adults and people with existing health problems, it can cause more severe illness, including pneumonia. The vast majority of people recover.

Netflix, sitting comfortably in the front ranks of streamers, emailed customers with a gentle nudge to “Rewind. Replay. Rewatch,” followed by suggestions of previously viewed titles such as “The Crown,” “Schitt’s Creek” and the 2012 movie “Frances Ha” starring Greta Gerwig.

The Walt Disney Co. put the box-office hit “Frozen 2” on its Disney Plus streaming service three months earlier than planned, “surprising families with some fun and joy during this challenging period.” The animated film became available in the past few days on the service in the U.S., Canada, Holland, Australia and New Zealand.

For Disney, streaming is the outlier in a corporate portfolio otherwise slammed by the coronavirus: The suspension of theatrical and TV productions and delays in new movie releases, including its long-anticipated “Black Widow,” but also the closure of Disney resorts in the U.S., France and Asia and the sports lull’s impact on its ESPN channels.

Disney and the other major streaming services didn’t respond or declined requests for comment for this article.

As financial hardship builds for people in lockstep with the crisis response, the services have yet to cut fees for new or current subscribers. The current monthly tabs range from the modest (Apple TV Plus, with its fledgling roster of shows is $5, Disney Plus is $7 for a deep bench of old and new fare) to Netflix’s top-tier plan ($16, compared to $9 for basic access).

Niche services are taking a different tack. Acorn TV, which offers British and international programming, expanded its free trial offer for new subscribers from a week to 30 days, as have its AMC Networks siblings Sundance Now, Shudder and Urban Movie Channel (UMC).

“As the extent of the Covid-19 crisis became clear, we realized that a service like Acorn TV could make a meaningful difference in many people’s lives, especially those who are facing prolonged isolation and potential economic hardship as a result of the virus,” said Matthew Graham, the service’s general manager.

Peacock’s U.S. launch isn’t until July, but with an upside for those with budget pressures: It will include a no-cost, ad-supported version, Peacock Free, with content including next-day access to new NBC shows and full seasons of older series. Two other tiers, including Peacock Premium for $5 monthly (free to Comcast and Cox subscribers), will offer more programming and live sports.

Peacock Free is going to be “a no-brainer for people,” Wlodarczak said.

The PBS Video app, public TV’s free streaming service, stepped up its offerings amid virus fallout. With Major League Baseball spring training games suspended and a delayed start to the season, the acclaimed Ken Burns’ “Baseball” documentary was added to the service and online at PBS.org.

“As many of us hunker down in the days ahead, it’s important that we find things that bring us together and show us our common humanity,” Burns said in a video message. “That’s why, in the absence of many of our favorite sports, I’ve asked PBS … to stream my film about America’s pastime. Stay healthy, and let’s look after each other. Play ball.” 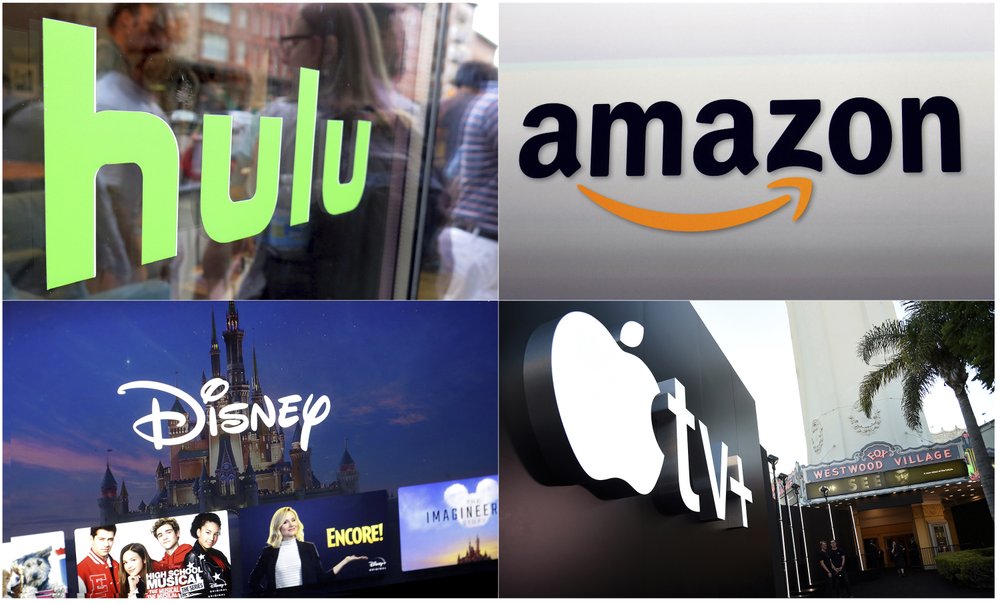 (Experts have said the U.S. internet won’t get overloaded by spikes in traffic from the millions of at-home workers and students, although it’s possible that households may find connections slowed because of their service level.)

The duration of the crisis could affect even streamers with well-stocked libraries, Wlodarczak said, given the widespread halt to filming. The fourth season of “Fargo” starring Chris Rock, which was to arrive on Hulu after its April debut on FX, has been postponed until production is back on track.

“The longer this lasts, you’ve got to find content to put on,” the analyst said.