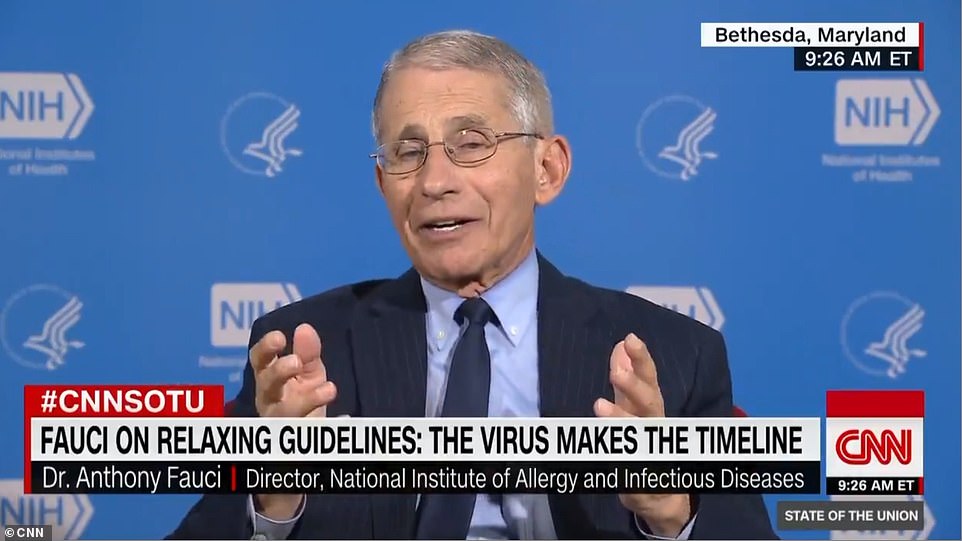 Dr Anthony Fauci, the government’s foremost infection disease expert, says the United States could experience more than 100,000 deaths and millions of infections from the coronavirus pandemic.

Fauci offered his prognosis in an interview with CNN’s State of the Union on Sunday morning, as the federal government weighs rolling back guidelines on social distancing.

The bleak projection comes as the US leads the world in coronavirus infections, with 123,778 reported to date. The nationwide death toll surpassed 2,100 on Saturday, doubling figures reported two days earlier.

The government is particularly looking at easing restrictions in areas that have not been hard-hit by the outbreak at the conclusion of the nationwide 15-day effort to slow the spread of the virus.

When asked about whether supported the move, Fauci said he would only support the rollback of social distancing guidelines in lesser impacted areas if there is enhanced testing in place.

Fauci also addressed President Donald Trump’s decision not to impose a strict quarantine on parts of New York, New Jersey and Connecticut after saying he was considering such restrictions on Saturday.

Fauci said it was important not to enforce something that would create ‘a bigger difficulty’, and instead issue a travel advisory for the New York metro area.
‘After discussions with the President we made it clear and he agreed, it would be much better to do what’s called a strong advisory,’ he said.

‘The reason for that is you don’t want to get to the point that you’re enforcing things that would create a bigger difficulty, morale and otherwise, when you could probably accomplish the same goal.’

The Centers for Disease Control and Prevention (CDC) issued its travel advisory late Saturday, urging residents of the three states to ‘refrain from nonessential domestic travel for 14 days effective immediately’.