Jung moved to Turkey with her husband, Kim Jin-Wook, in 2015. The Korean Christian couple found a place to live in an impoverished district of Diyarbakir in southeastern Turkey, 60 miles from the Syrian border. Kim worked selling spices, but his real calling, as he understood it, was witnessing to the gospel. He took the Turkish name “Peace,” and his Christian friends in Turkey say he was a great evangelist.

“He shared the gospel in every corner of Diyarbakir without hesitation,” said Ahmet Güvener, pastor of the Diyarbakir Protestant Church, which has about 70 members. “He was not aggressive, but clear, and I think local people were uncomfortable with this.”

One day in November, Kim told Jung he was going out to evangelize. He was attacked on the street, stabbed twice in the chest and once in the back. Kim, 41, died of his wounds in a city hospital.

Authorities arrested a 16-year-old boy for the crime. He has allegedly confessed to the murder, saying he was trying to steal Kim’s phone.

Despite her grief, Jung saw this as an opportunity to testify. She wrote a letter to the boy accused of killing her husband.

“I do not understand why you did this, but I cannot be angry at you,” she wrote on her phone. “Many people want the court to give you a heavy punishment. But I and my husband don’t want this. We pray that you become worthy of heaven, because we believe in the worth of people. God sent his Son Jesus, who forgave those who persecuted him. We also believe in that and we pray that you would also repent of your sin.”

Jung read the letter aloud to the local media. Her testimony was viewed online more than 22,000 times.

Turkish officials released American minister Andrew Brunson from prison a year and a half ago, under pressure from President Donald Trump. Since then, Turkey has not arrested any more foreign Christians. That doesn’t mean things have gotten better for the churches in Turkey, though. Some believe Kim’s murder was a covert continuation of an anti-Christian policy. Güvener suspects it wasn’t a simple mugging, but an assassination.

Hate speech, however, continued to rise. 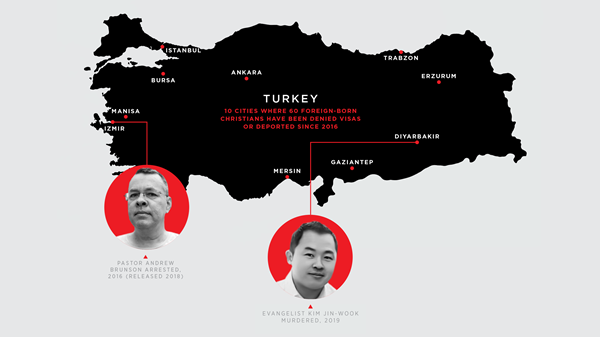 Turkey is officially secular. Its constitution forbids religious discrimination and permits conversion. But the nation’s Muslim majority can be hostile toward non-Muslims. In a town near Ankara, billboards warned children not to befriend Christians or Jews.

The Diyarbakir Protestant Church regularly receives threatening phone calls, and one time young men gathered and pelted the church with stones. According to Güvener, police have taken no action.

Güvener started his church in 1994 but couldn’t get it legally registered as an association until 2003, when pressure from the European Union led the Turkish government to change the law.

Today, there are about 7,000 Christians in 150 congregations affiliated with the APC. About 16 percent are house churches that are not technically allowed to meet. This has not typically been a problem but can put them in a precarious position.

The yearly report noted that three congregations were able to register as “religious foundations.” While this path represents a positive development, the state has still not granted the APC an official religious legal identity.