Crowds gathered to watch the USNS Comfort, a Navy hospital ship with 1,000 beds for patients, arriving in New York City to alleviate the strain on the city’s hospitals as it continues to battle the coronavirus pandemic – despite being warned to stay at home.

The ship arrived at New York Harbor on Monday morning. It will welcome patients who do not have coronavirus but who still need care in order to clear out the city’s other hospitals for those who have tested positive for COVID-19.

It came as the death toll in New York City hit 790 and more than 36,000 cases were recorded. New York City is the epicenter of the virus in the US.

The USNS Comfort came to New York City after 9/11 to help care for some of the thousands wounded. That was also the last time the city saw as many makeshift morgues in the street to cope with the death toll of the virus.

On Monday, crowds gathered near Pier 90 to watch the Comfort arrive.

They gathered despite Mayor Bill de Blasio warning that he may start fining people $500 if they are seen breaking social distancing guidelines in public.

At a press conference on Monday, he said what was needed was ‘battlefield medicine’ and that Sunday, April 5, was ‘D-Day’. He is asking for more help from the government by then.

The USNS Comfort is one of two Navy ships that the government deployed last week to try to ease the burden of the virus on hospital systems in two of the worst hit areas; New York and the west coast.

The USNS Mercy was deployed to Los Angeles. It has already started welcoming patients.

On Monday, the Comfort steamed into New York Harbor at around 10am. It will bring with it more than 1,000 medical personnel and more than 100 operating rooms.

In addition to the Comfort, a makeshift hospital has been set up in the Javits Center – where there are 2,500 people will be cared for.

Gov. Cuomo said he wanted to build eight in total to add another 8,000 beds to the city’s hospital system.

On Monday, speaking at the harbor as the ship arrived, he said: ‘That is going to be welcome news and I want to thank all of the people that worked so hard to do this. This is a major enterprise.

‘The Javits Center, what is going on there is truly extraordinary. Everybody is working together to get that facility up and running. It has been transformed in just a week.

‘ And it really is a great, great partnership and frankly it’s inspiring to see everyone working together for one cause.

‘We’re speaking with a number of my colleagues, governors all across the nation, Democrats and Republicans, have sent the same message to all of you. What you see happening in New York is not unique. Yes, we’re more dense. Yes, we’re bigger than most places. But, this virus spreads among Americans.

‘The President’s right. This is a war. And what does this nation do when it’s at war? It comes together. And it acts as one. And that’s what we need to do today. New Yorkers, thank this nation for the help they’re giving New Yorkers today, and we will reciprocate the favor.

‘And what we’re learning here, and the training that’s going on here, is going to benefit the places all across this nation in the coming weeks and the coming months,’ he said.

He defended his decision to ask for more ventilators than he needs immediately, saying he is asking for what he will need in a few weeks time when the pandemic peak happens in New York City.

‘If you wait to prepare for when the storm hits, you lose. Because it’s too late,’ he said.

He has also resisted suggestions by President Trump that he would quarantine the state of New York and has lashed out at Rhode Island Governor. Gina Raimondo for saying anyone who enters her state from New York has to self-quarantine for two weeks.

The Mount Sinai hospital system in New York City is setting up the temporary treatment facilities outside six of its hospitals – five in New York City and one in Long Island – as it prepares for a projected influx of COVID-19 patients. 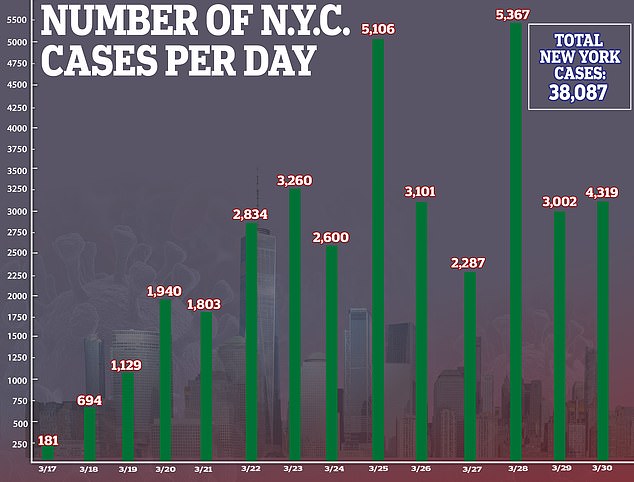 ‘The tents will be critical in helping us limit the spread of the disease between patients and staff,’ hospital officials said in a statement last week, adding that they will expand the emergency room ‘footprint’.

Workers were seen unfolding massive tents and spacing them out on a grassy field where dozens of boxes of supplies waited to be unpacked.

Mount Sinai West made headlines earlier this month after a photo emerged of three of its nurses wearing black garbage bags as makeshift gowns amid a dire shortage of personal protective equipment. One of its nurses, 48-year-old Kious Kelly, died at the hospital after contracting coronavirus.

On Monday, Dr. Fauci – the White House coronavirus expert – said other cities across the country are ‘percolating’ and show signs they may too see a spike like New York’s.

The USNS Mercy arrived in Los Angeles this on Sunday to welcome patients and ease the strain on California’s hospitals.

It will perform the same role in L.A. as the Comfort in New York; welcoming patients who do not have the virus in order to clear up beds in the rest of its hospitals.

In L.A., there are more than 2,000 cases of and 37 people have died. The numbers have not caught up to New York City by any stretch, but there are fears the city may soon see a spike.

On Monday morning, Dr. Anthony Fauci – the most authoritative voice on the subject – said he would ‘not be surprised’ if as many as 100,000 die in the US from the virus by the time the pandemic is over.

He said he is looking at L.A. as the next possible epicenter, after New York, along with other cities that are ‘percolating’ like Detroit and New Orleans.

California Gov. Gavin Newsom was the first to issue a stay-at-home order to try to stop the spread before it happened. 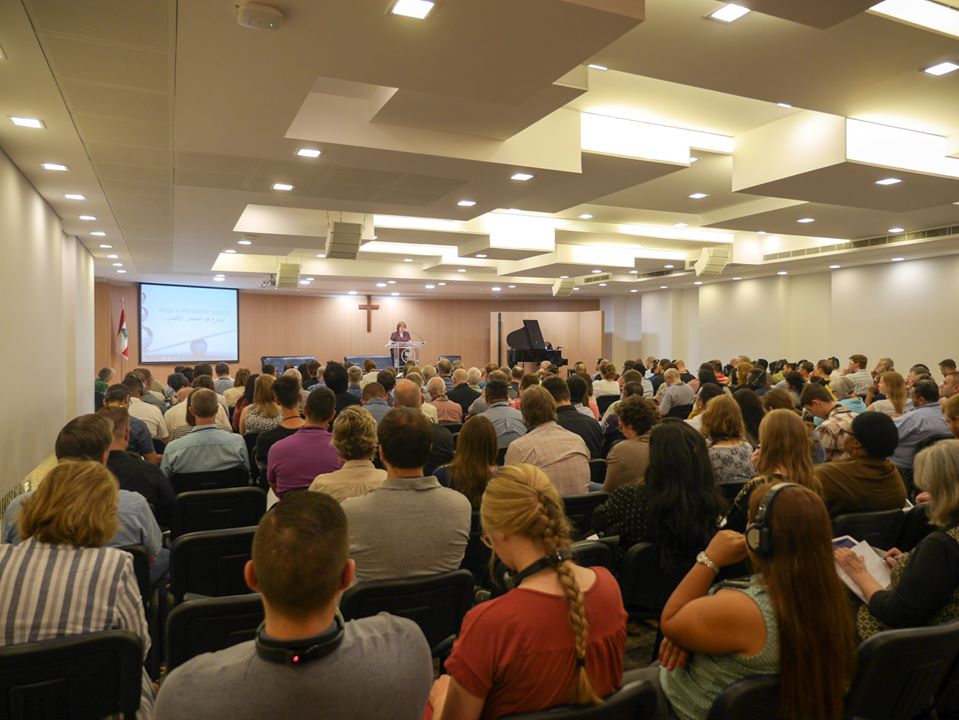 Social-distance Vacations: Wealthy Tourists Seek Out Wilderness Camps, Private Jets and $50,000 RV Rentals So They Can Holiday Away From Crowds Amid Coronavirus Pandemic 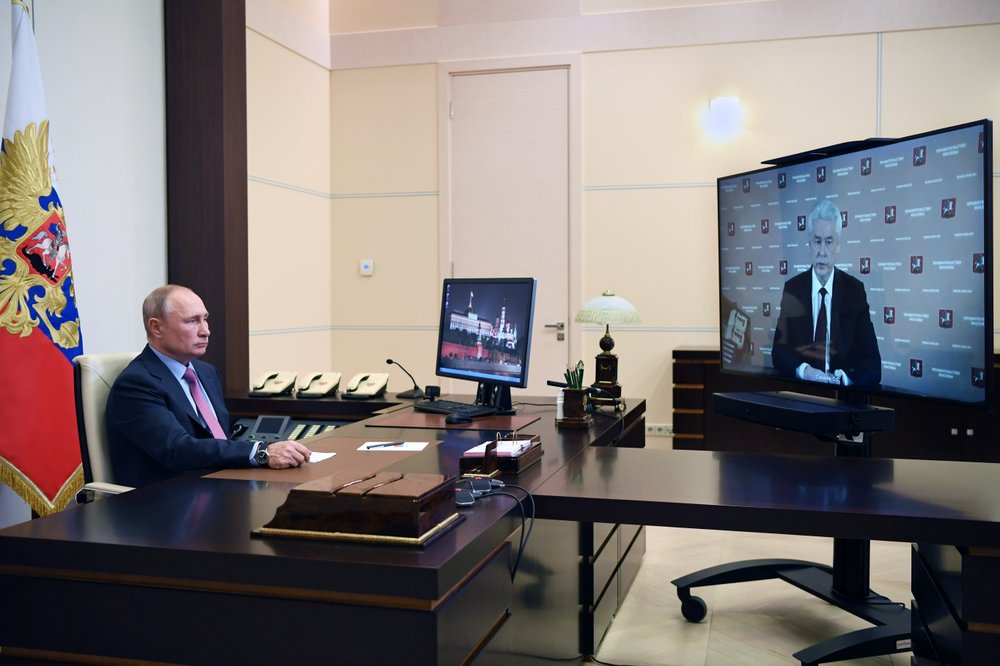 Latest on virus and its global effects