Oklahoma City honors victims of the 1995 bombing that shocked the nation in what remains the deadliest act of domestic terrorism in U.S. history through a memorial and museum, annual remembrance ceremonies and a marathon.

This year for the 25th anniversary of the April 19, 1995, attack on the Alfred P. Murrah Federal Building that left 168 people dead, organizations throughout the city are making special observances through art.

“(Arts) can be an outlet for expressing, particularly emotions, in a safe way,” for both the audience and the performers, said Dr. Vaile Wright, director of clinical research and quality at the American Psychological Association.

“Anniversaries for some can be what we call a trigger … a trigger is often thought of as an unhappy remembrance of what happened. For others, coming together with people and having a remembrance is incredibly important,” to share grief, Wright said.

In February, the Oklahoma City Philharmonic performed “Of Thee I Sing,” a symphonic and choral presentation it commissioned.

The Oklahoma City Ballet is planning multiple performances, including one choreographed to songs by country singer Vince Gill, a native of Oklahoma.

“As an arts organization, I thought it would be good to acknowledge it somehow, rather than just come out on stage and make an announcement, (or) have a moment of silence,” said the ballet’s artistic director, Robert Mills.

Gill, Mills said, has given his blessing and use of his songs “Oklahoma Borderline,” “Go Rest High on That Mountain,” “Hey God,” “When Love Finds You,” and “The Sun is Gonna Shine on You,” which range from somber to upbeat.

“There’s so many young people that weren’t even born,” Mills said. “People should not forget days like April 19.”

The ballet and the Oklahoma City Repertory Theatre presentation of “The Oklahoma City Project,” a reading in which actors recite the writings of survivors, first responders and family members of victims, are currently still scheduled despite concerns about the spreading coronavirus, according to spokesmen for the two organizations.

But at least one performance has been postponed because of COVID-19. The Canterbury Voices of Oklahoma City hopes to reschedule “Of Perpetual Solace,” an original work described as “a poetic and lyrical reflection on grief, loss and love” for later this year, according to marketing manager Kelly Moore.

Reactions from those directly impacted by the bombing are mixed.

“We will never heal from what happened April 19, 1995,” said Jannie Coverdale, whose grandsons Aaron Coverdale, 5, and Elijah Coverdale, 2, were among 19 children killed inside the building’s day care.

But Susan Walton, 69, who was making a deposit at the credit union inside the building when the truck-bomb exploded, said she’s grateful for the efforts.

“To know that people are still with us — it is greatly appreciated that they’re remembering it,” she said.

“I think it’s important that we don’t ever forget,” Fields said. “Anything to honor the sacrifice of those victims and survivors I welcome with open arms.”

Two men were convicted in the bombing. Timothy McVeigh was executed in 2001; co-conspirator Terry Nichols remains behind bars, serving a life sentence.

Kari Watkins, executive director of the Oklahoma City National Memorial Museum, worries that people will forget what happened and that the bombing has been overshadowed by events such as the Sept. 11 terror attacks and mass shootings, including one in Las Vegas in 2017 that was the deadliest in modern U.S. history.

“It’s our goal, it’s our mission to keep the story going. … Absolutely it’s hard. Other things have happened since this happened here,” Watkins said.

Other commemorations this year include the NBA’s Oklahoma City Thunder providing free admission once monthly to the museum and wearing special uniforms at some games. The Thunder also presented families of the victims with a medallion depicting the survivor tree, a scarred American elm that withstood the blast, and replicas of uniform jerseys with the names of the victims on the back and the number 95, for the year the bombing occurred.

Coverdale said she appreciates what the team has done.

“After all these 25 years, they’re the ones that have comforted us the most,” Coverdale said. “They remember what happened to us that day.” 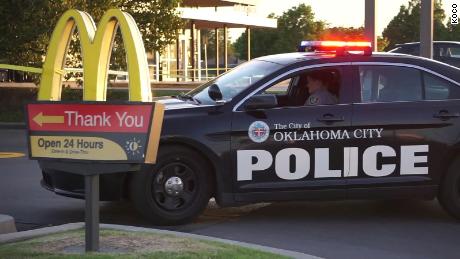