White supremacist groups doubled down on colleges and universities across the country in 2019, blanketing campuses and off-campus haunts with propaganda, according to a new report from the Anti-Defamation League’s Center on Extremism.

The report found a total of 2,713 cases of leafleting on and off campus — an average of more than seven per day nationwide, compared with 1,214 in 2018. That makes it the highest year on record for such activity in the United States.

Instead of overtly targeting Jews, Muslims, blacks and other ethnic groups, the largest of the white supremacist groups are using patriotic slogans such as “Defend America” superimposed on the U.S. flag to veil their messaging.

“These groups are trying to use patriotism to appear mainstream,” said Carla Hill, a senior investigator with the ADL’s Center on Extremism. “‘Defend America’ sounds patriotic but when it’s backed by a white supremacist website we want to call it what it is.”

Hill said the idea is to appeal to a broader range of young people, some of whom may not yet embrace white supremacist ideals. 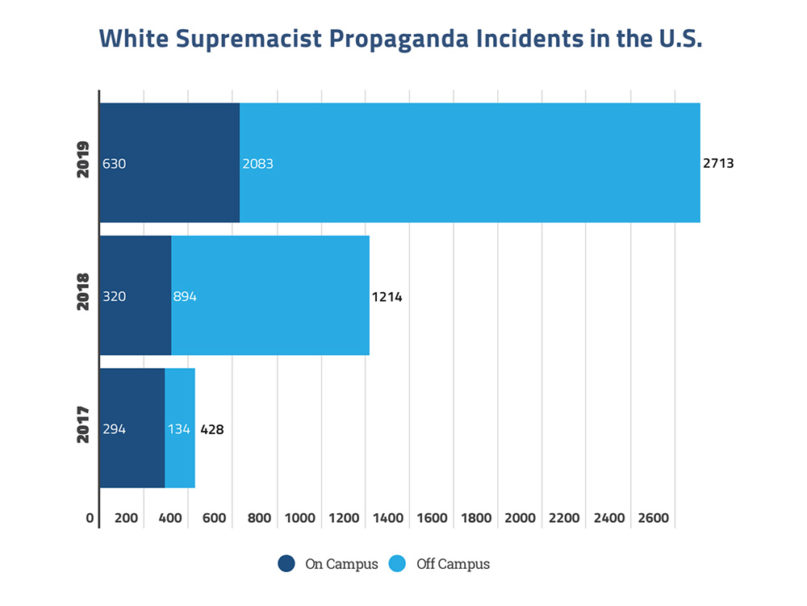 The growth in numbers and activities has worried law enforcement, too.

Last week, FBI Director Christopher Wray testified before the House Judiciary Committee, saying, “The most persistent threats to the nation are from homegrown violent extremists.”