Plans for a proposed debate between liberal Christian leaders and representatives from Liberty University, a theologically conservative evangelical Christian school, have stalled, with participants unable to agree on a topic or a date for the event.

The Rev. Jonathan Wilson-Hartgrove, a North Carolina pastor slated to participate in the event, suggested Liberty University had backtracked.

“It seems Charlie Kirk and Jerry Falwell want to launch a center and fire people up about the dangers of an imagined socialism, but when they publicly challenged us and we said we would be glad to pay our own way to come and make the biblical case for taxing corporate wealth to address real human needs, they aren’t willing to back up their tweets,” he told Religion News Service in a text.

He told RNS the school wants to hold the debate — which was originally planned for the spring — but prefers to push it until after the Democratic and Republican conventions this summer.

“I think it’s a lot more interesting conversation after the RNC and DNC have their conventions and draft their platforms,” he said.

Talk of a debate between liberal faith leaders and representatives from Liberty first emerged in November 2017, when Wilson-Hartgrove and the Rev. William J. Barber II, co-chair of the activist group The Poor People’s Campaign, joined other clergy in signing a public letter calling on Liberty to host a theological sparring session between themselves and school President Jerry Falwell Jr., a vocal supporter of President Donald Trump. 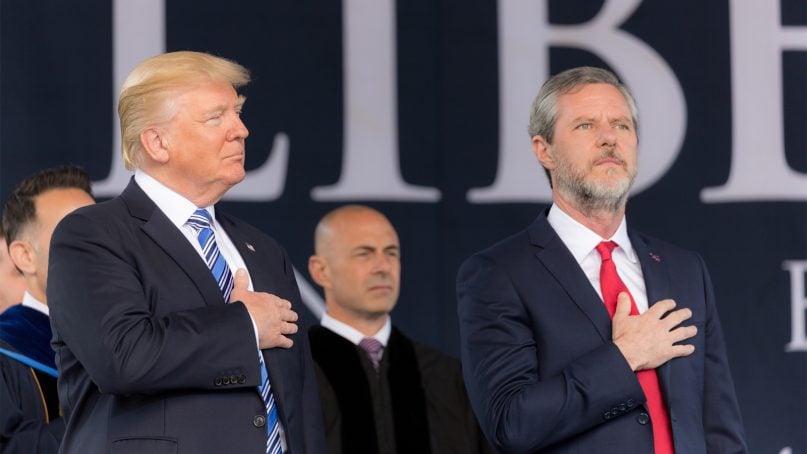 Falwell and Liberty initially did not respond.

Then, in November 2019, the school announced the creation of the Falkirk Center for Faith and Liberty — a think tank with the goal of defending “Judeo-Christian” beliefs that is co-founded by Falwell and Charlie Kirk, the 26-year-old head of the conservative group Turning Point USA.

A few days later, the Falkirk Twitter account challenged Wilson-Hartgrove and a partner to debate representatives from the center over the question “Was Jesus a Socialist?”

Wilson-Hartgrove pushed back against the focus on socialism, agreeing instead to a “public conversation about what the Lord requires of us in public life” and saying that he would be accompanied by Barber.