Gov. Kevin Stitt, Attorney General Mike Hunter and Oklahoma Department of Corrections Director Scott Crow said in a joint news release that the state will resume executions using a three-drug lethal injection protocol and that a source for the drugs has been secured. The three drugs are: midazolam, vecuronium bromide and potassium chloride.

“I believe capital punishment is appropriate for the most heinous of crimes and it is our duty as state officials to obey the laws of the state of Oklahoma by carrying out this somber task,” Stitt said.

Hunter said his office has notified the state criminal appeals court that they’re ready to resume executions, which triggers a five-month wait before an execution can be scheduled.

Dale Baich, a federal public defender representing death row prisoners who are challenging the state’s execution procedures in federal court, said in a statement that he’s disappointed the state is reverting to the same three-drug protocol that has been used in past problematic executions.

“Oklahoma’s history of mistakes and malfeasance reveals a culture of carelessness around executions that should give everyone pause,” he said. “In the next few days, we will advise the federal court and continue with the ongoing litigation challenging the constitutionality of Oklahoma’s protocol.”

Oklahoma once had one of the busiest death chambers in the nation, but executions were put on hold following a botched lethal injection in 2014 that left an inmate writhing on the gurney and drug mix-ups in 2015 in which the wrong lethal drugs were delivered. One inmate was executed with an unapproved drug and a second inmate was just moments away from being led to the death chamber before prison officials realized the same wrong drug had been delivered for his execution.

The execution protocol announced Thursday utilizes the same drugs that Oklahoma used previously including midazolam, which the U.S. Supreme Court found constitutional in 2015.

Hunter said he anticipated court challenges but that any past problems during executions have been associated with human error, rather than the drugs themselves.

Meanwhile, more than two dozen inmates have exhausted all their appeals and are awaiting execution dates to be set. There are 47 inmates on Oklahoma’s death row, Hunter said.

Even after the bungled executions, Oklahoma voters overwhelmingly approved a state question in 2016 enshrining the death penalty in the state constitution, and Stitt said he supports it.

“We need to stop sending taxpayer money to kill human beings,” Coakley said. “We deserve justice for these heinous crimes, but we don’t end the cycle of violence by committing more violence.”

In 2015, Oklahoma became the first state in the nation to approve the use of nitrogen gas for use in executions, but never finalized plans to use it. Hunter said Thursday that prison officials have made “good progress” on developing a device to deliver nitrogen gas and will continue their efforts in case drugs become unavailable again the future.

Department of Corrections emails obtained by The Associated Press show the agency’s former deputy chief of operations reached out to a manufacturer of reduced oxygen breathing units used to help train pilots on the signs and symptoms of hypoxia.

The president of the company responded that she didn’t believe executions would be an appropriate use of their product and that she had concerns about potential liability.

There’s a Devil Loose: Oklahoma Mother ‘Bit her One-Month-Old Baby’s Face and Burned the Infant in a Hot Bath to Punish her for Crying’ 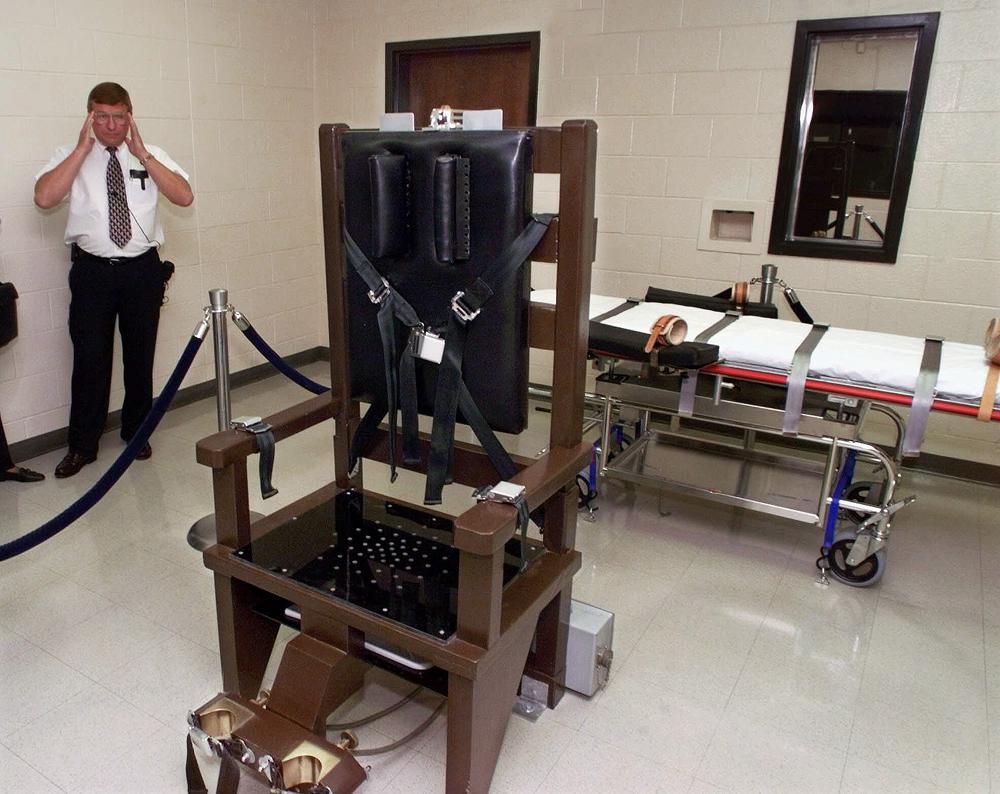 Ultimate choice: Tennessee inmates wrestle with how to die