Actor, director and producer Tyler Perry says his latest film, Netflix’s “A Fall from Grace,” was birthed out of his own experience clinging to his faith and prayer in times of pain and uncertainty.

“I just want people to know that no matter how dark, no matter how bad, no matter how dismal the scene or situation you’re in, there’s still hope,” Perry told The Christian Post in sit-down interview in New York City. “I say that even from my own life, realizing that I was in some of the darkest times in my life and didn’t even know if I was going to make it. But as long as it held my faith and held on to hope and prayer and God and believing, it all came together.”

“A Fall from Grace,” released on Netflix Jan. 17, is not a family-friendly film. The dark thriller features brief nudity, sexual content, and some adult language that might turn off some of Perry’s faith-based viewers.

It does, however, highlight the themes of hope, perseverance, and loyalty while showing the realities of what some single, aging women face.

The Netflix original film follows Grace Waters (Crystal R. Fox), a downtrodden woman who is restored by a new romance after being disillusioned and lonely since her ex-husband’s affair. However, it’s not long before Grace learns secrets about her new husband that shatter her world in ways she never could have imagined. When Grace is convicted of murdering him, it’s down to her and her lawyer (Bresha Webb) to uncover the truth.

Phylicia Rashad, Mehcad Brooks, Cicely Tyson and Perry round out the cast, while Perry also directed and wrote the screenplay.

“In the beginning, I was very much, ‘I’m only going to do certain things, I’m only gonna tell certain stories,’” Perry recounted. “And then I realized as a storyteller, there were so many more ways to tell stories and still reach people. So this was very important to me that while I was doing this, that I got an opportunity to really take this woman on her journey who was the woman of faith through all that she went through and just let people know that no matter how dark it gets, there’s always hope.”

An outspoken Christian, Fox added that while many people choose their work based on their faith, she adopts the mentality that “where I am, God is.”

“I take Him with me. I never leave Him,” she said.

Although it’s not a faith-based film, religious symbolism and themes are sprinkled throughout “A Fall from Grace.” Grace talks about her faith, is seen attending church, and chooses her lawyer based on their shared beliefs. 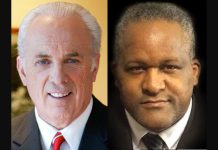