ORLANDO, Fla. (RNS) — Reinhard Bonnke, the German evangelist known as “The Billy Graham of Africa,” was lauded at a Saturday (Jan. 4) memorial service as “a giant and a general in the army of God.”

During more than four decades of mass crusades in Africa, Bonnke preached in 51 of the continent’s countries and claimed to have converted 79 million people to Christianity.

Click here to watch Reinhard Bonnke – Legacy of Harvest Memorial Service from Christ for all Nations on Vimeo.

About 2,000 people gathered from around the U.S. and around the world in the sanctuary of the Faith Assembly of God for a three-hour celebration of Bonnke’s life and ministry.

More than a dozen speakers, including a number from African ministries and denominations, lauded Bonnke, for both his zeal and his personal humility. Other Pentecostal leaders, including T.D. Jakes, Benny Hinn and Paula White, appeared on the three large screens above the sanctuary’s stage with filmed tributes.

A large crowd surrounds the stage as Reinhard Bonnke holds a crusade in 2006 in Africa. Photo courtesy of Bonnke.net

A large, red floral arrangement in the shape of the African continent was placed on an easel next to the speaker’s lectern. Along the front of the stage stood sheaves of wheat, symbolizing the harvest of Bonnke’s evangelism.

Between the morning’s speakers, clips of Bonnke’s African crusades, some to audiences of hundreds of thousands, played on the screen.

The best known of these was in Lagos, Nigeria, in November 2000, when an estimated 1.6 million heard Bonnke preach. In 2001, Christianity Today magazine called Bonnke “one of the continent’s most recognizable religious figures.”

In a tweet after Bonnke’s death, Muhammadu Buhari,  the president of Nigeria, said the country “joins Christendom at large in mourning the passing of renowned evangelist, Reinhard Bonnke.”

Bonnke’s death, Buhari said, was “a great loss to Nigeria, Africa (and the) entire world.” 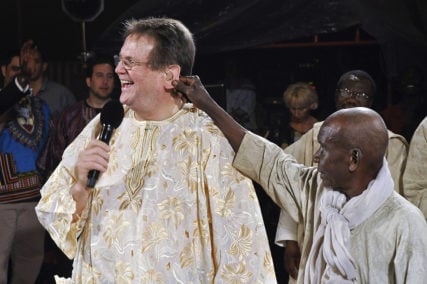 Reinhard Bonnke during a crusade in 2008. Courtesy
photo by Oleksandr Volyk/www.bonnke.net

Pia Sebastian, 46, came from Dallas to attend the celebration. In 2013, Sebastian said, she gave up a corporate career to study evangelism at one of Bonnke’s training schools.

“I honor Reinhard Bonnke, and I believe that I’m called to carry the torch and fulfill the work of sharing the gospel,” Sebastian said.

Bonnke was the son of a German soldier who became a minister after World War II. Mesmerized by tales of 19th century European missionaries like David Livingstone, young Reinhard would later say he heard the voice of the Holy Spirit say to him: “Africa shall be saved!”

“Billy Graham has inspired me personally,” he wrote after the American evangelist’s death in 2018. “When he preached in a tent in Hamburg, Germany. I always felt connected to him.”

Early in his evangelistic career, Bonnke acknowledged in a 2003 interview, he made a strategic decision that proved controversial. He based his ministry in an all-white area of Johannesburg, South Africa, and did not publicly oppose the apartheid regime. Bonnke said he did make known his opposition to apartheid, but indirectly through his ministry. His associate was a black minister who always traveled with him.

“I had a choice,” he said. “To become politically active and oppose apartheid from the pulpit. Or, to preach the gospel and make people find salvation in Jesus Christ.”