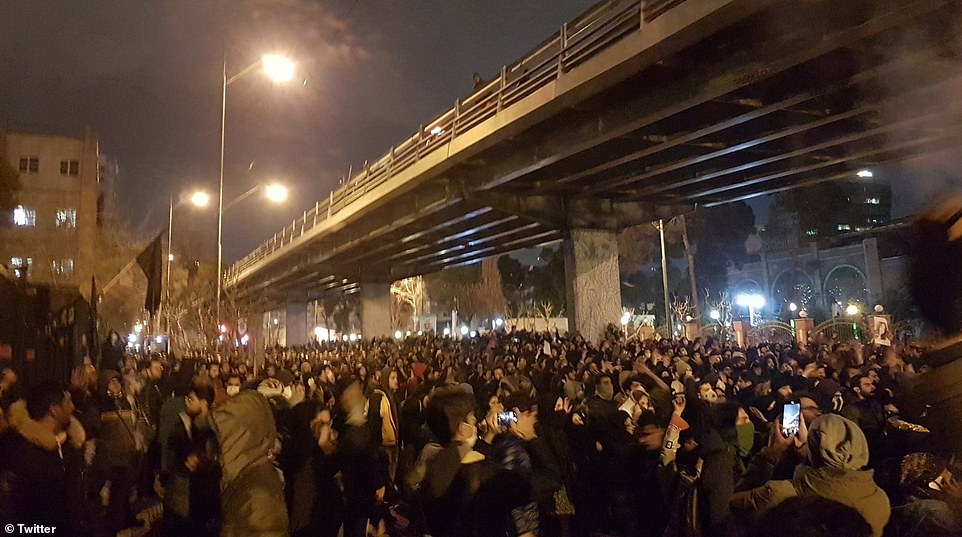 Iranians have gathered in the streets of Tehran to demand the resignation of Ayatollah Seyed Ali Khamenei after the regime admitted it had mistakenly shot down a civilian passenger plane.

Angry crowds gathered on Saturday night in at least four locations in Tehran, chanting ‘death to liars’ and calling for the country’s supreme leader to step down over the tragic military blunder, video from the scene shows.

What began as mournful vigils for Iranian lives lost on the flight soon turned to outrage and protest against the regime, and riot police quickly cracked down, firing tear gas into the crowd.

‘Death to the Islamic Republic’ protesters chanted, as the regime’s security forces allegedly used ambulances to sneak heavily armed paramilitary police into the middle of crowds to disperse the demonstration.

Ukrainian Airlines Flight 752 was carrying 176 people, at least 130 of them Iranian citizens, when it was shot down by hapless Iranian Revolutionary Guard air defense forces shortly after taking off from Tehran on January 8.

Iran for days claimed that a technical failure caused the crash, before admitting on Saturday that its own surface-to-air missiles brought the plane down.

Iran was on high alert at the time, hours after launching ballistic missiles at U.S. forces in Iraq in a strike that caused no casualties. That missile strike was in retaliation for a U.S. operation that killed powerful Iranian General Qassem Soleimani.

After Iran’s admission, however, Canada’s prime minister appeared to cast doubt on the claim that the shoot-down was an accident, suggesting there may have been an Iranian motive for the disaster. Many passengers were dual Canadian citizens.

On Saturday afternoon, candlelight vigils at universities in Tehran for the victims of Flight 752 began to turn to protests against the regime. Large protests were reported at the universities of Tehran, Sharif Industrial, Amir Kabir, and Allameh.

At Amirkabir University, protesters chanted ‘Down with the dictator’ and ‘shame on IRGC [Revolutionary Guard], let the country go.’

‘Our enemy is right here; they lie when they say it’s the US’ protesters were heard chanting in one video.

‘I now believe the word of the Great Satan,’ one protester wrote in Persian on Twitter, apparently referring to the U.S. intelligence reports that blamed Iran for shooting the plane down, which the regime furiously denied at first.