Christian rapper TobyMac’s 21-year-old son died of an accidental drug overdose and he had a history of narcotics and alcohol abuse, a toxicology report has revealed.

Truett Foster McKeehan was discovered dead at home October 23, 2019 and in a blog post the following day, his Grammy award-winning father called him ‘magnetic’ with an ‘untamable grand personality and dreams to match’.

The Davidson County Medical Coroner in Tennessee noted in the report that he had fentanyl and amphetamine in his system, and the report stated his cause of death was ‘acute combined drug intoxication’, RadarOnline reports.

Almost three months after McKeehan’s death at the family home in Nashville, the report reveals that ‘postmortem toxicologic studies indicate the presence of multiple substances in the blood’. 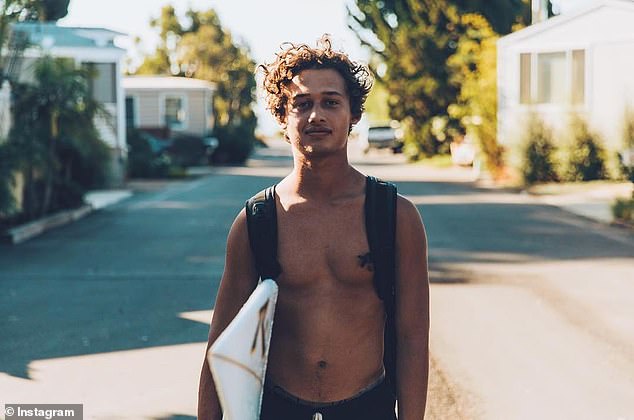 In the documents, McKeehan was described as a ‘young adult white male with a history of drug and alcohol abuse and possible use of nitrous oxide’.

Nitrous oxide is otherwise known as laughing gas and depending on how much is used can result in fits of giggles and feelings of euphoria or calmness due to a slowing down of the brain and the body’s responses.

Amphetamines are used to stimulate the nervous system as part of treatment for children and adults with attention deficit hyperactivity disorder (ADHD) or narcolepsy.

Fentanyl is an opioid that can be 50-100 times stronger than morphine.

A friend had found McKeehan unresponsive. The Nashville Fire Department said McKeehan was pronounced dead at the scene after they were called at around 10.50am to reports of a person in cardiac arrest.

Medical examiners noted he had ‘multiple small healing scars’ as well as a ‘dusky brain’.

Details of the report state the body was in the ‘early state of decomposition’.

There was ‘no evidence of internal trauma’, according to RadarOnline.

When the death was announced TobyMac – real name Kevin Michael McKeehan – left his week-long tour of Canada and flew home to be with his wife and other children, citing a family emergency.

As this cause of death was revealed, TobyMac was rehearsing for his Hits Deep Tour 2020.

It’s unclear when he would have heard the official cause of death. 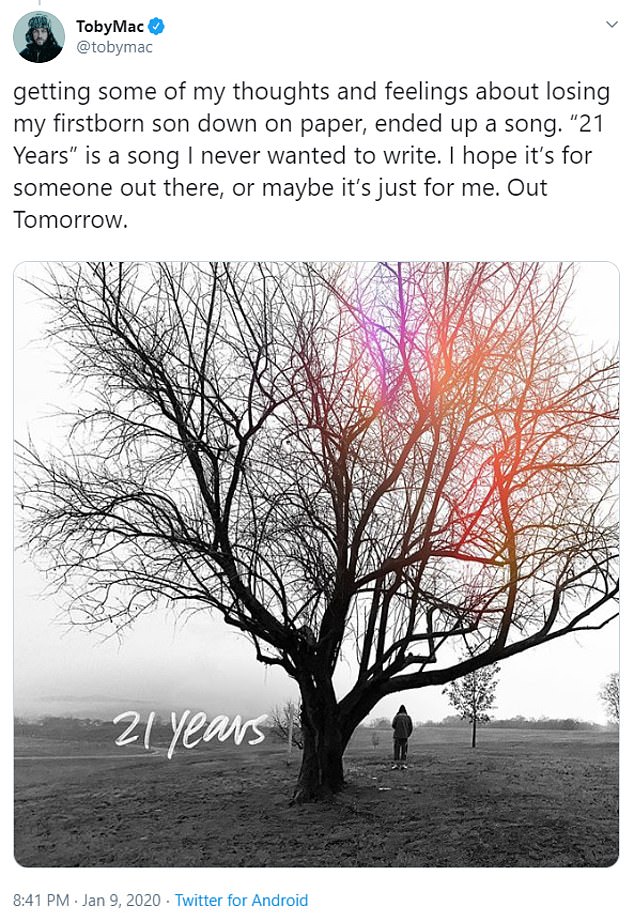 On January 9, he touched on losing his son as he spoke about his latest track “21 Years”, which is about McKeehan.

‘The last couple of months have been the hardest I’ve ever faced. Thank you for the love and support. Part of my process has always been to write about the things I’m going through, but this went to a whole new level,’ he tweeted.

‘What started out as getting some of my thoughts and feelings about losing my firstborn son down on paper, ended up a song. ’21 Years’ is a song I never wanted to write. I hope it’s for someone out there, or maybe it’s just for me.’

Aspiring rapper Truett had performed as Shiloh, truDog, and TRU and had collaborated with his dad on tracks.

His last Instagram post was a video of him performing. He wrote: ‘Last night it all kinda came together… thank you to everyone who has supported me through the thick and thin.’

TobyMac, who has topped the Billboard’s Christian Songs chart six times, shared messages the aspiring rapper had sent him just days before he died.

The artist shared the texts as he paid tribute to his oldest son.

TobyMac, 55, said the last moment the pair shared was at his son’s first show at the Factory in Franklin, Tennessee.

He said: ‘As I stood in the audience and watched my son bring joy to a room, I was as proud as a ‘pop’ (as tru called me) could be.’

In the messages TobyMac tells his son: ‘I wanted to tell you how proud I was of you last night…Your show was amazing and I think you’ve got the ‘it’ factor which is very important but explainable. Your joy is infectious and you invite people into it. But one more thing.

‘I was very very very proud of you when you went down and stood on the front row after most people left you watched Nathan’s show from the front row and encouraged him…that kind of thing right there will take you farther than great art…God doesn’t miss those things like he notices things like that and blesses us I promise.’

Truett replies: ‘love you dad. thank you so much. you have always believed in me. make me feel like a superhero.’

TOBYMAC’S HEARTBREAKING TRIBUTE TO HIS SON IN FULL

Rapper TobyMac has shared the following heartbreaking tribute to his eldest son, Truett Foster Mckeehan, who died suddenly on Wednesday.

He writes: ‘Truett Foster Mckeehan had joy that took the room when he entered. He was a magnetic son and brother and friend. If you met him you knew him, you remembered him. His smile, his laugh, the encouragement he offered with words or even without. He had an untamable grand personality and dreams to match. And he hated being put in a box.

‘He expressed himself through the music he made. And by made I mean, written, recorded, produced, mixed, and designed the art. All of it. A true artist. His first show was a week ago, and it was nothing short of electric.

‘Everyone felt it, everyone knew it. He could’ve easily taken the easy route and put music out when he was 12, 14, 16, even 18, but he always said he wanted to live some life and have something to say before he did it. He didn’t want to be a child star, he wanted to be a man with scars and a story to tell. I always admired, respected and encouraged that stand.

‘Truett always had a soft spot for God. The Bible moved him. His heart was warm to the things of his King. He was by no means a cookie cutter Christian but give me a believer who fights to keep believing. Give me a broken man who recognizes his need for a Savior every time. That’s who Truett was and how he should be remembered.

‘My last moment with Truett in person was at his first show this past Thursday at the Factory in Franklin, Tennessee. I had to leave the next morning very early to fly and start our Canadian tour. As I stood in the audience and watched my son bring joy to a room, I was as proud as a ‘pop’ (as tru called me) could be.

‘It was the culminating moment of a dream that he had since he was 12. It couldn’t have been sweeter. Our music, and what we say lyrically couldn’t be more different, but the outcome was much the same… offering a room full of people a few minutes of joy in a crazy world.’

Successfully Parenting A Child With A Disability