Since 1973, 166 people in the US have been exonerated from death row. In 2018 alone, wrongly convicted people lost more than 1,600 years of their lives behind bars. Many exonerated individuals never received any form of reparations. One man, Anthony Ray Hinton, spent 30 years on death row for a crime he did not commit. Though he was exonerated with the help of the Equal Justice Initiative in 2015, Hinton has not received an apology from the state, or from anyone involved in his prosecution, for the years stolen from him.

The film Just Mercy, which releases January 10, provocatively beckons all—especially the US church—to confront the unjust nature of our nation’s criminal justice system. The film provides a sobering glimpse into how race, class, and systemic sin inform culpability and judicial verdicts. Revolving around the faith-rooted activism of Bryan Stevenson (played by Michal B. Jordan) and the creation of the Equal Justice Initiative (EJI), Just Mercy recounts the tragic story of Walter McMillian (Jamie Foxx). McMillian, or Johnny D., was an African American who owned a lumber company in a small Alabama town and was framed for the murder of Ronda Morrison—an 18-year-old white girl.

The film chronicles Stevenson’s graduation from Harvard Law School and move to Montgomery, Alabama, where he opens a law firm that provides legal defense for those awaiting execution on death row. McMillian’s case was one of the first, and most difficult, cases of Stevenson’s career. Just Mercy illuminates Stevenson’s relentless pursuit of truth and justice, commitments that led Archbishop Desmond Tutu to knight Stevenson as “America’s Nelson Mandela” and enabled EJI to successfully challenge more than 125 death row convictions since 1989.

The US not only has the highest rate of incarceration in the world, we also have more people locked up than any other country in the history of the world. We also have more jails and prisons than degree-granting colleges and universities. In some areas of the country, there are more people living behind bars than on college campuses. Native Americans, Africans, Hispanics, and Southeast Asians are all grossly overrepresented within our justice system. EJI found that for every nine people executed on death row, one is found innocent and released.

US Christians must lament how the politics of fear and anger have tamed our witness in the world. Stevenson points out in his documentary True Justice that everybody imagines that, if they were in Alabama in the 1960s, they would have been marching with Martin Luther King Jr. “And, the truth of it is,” he says, “I don’t think you can claim that if today you are watching these systems be created that are incarcerating millions of people throwing away the lives of millions of people, destroying communities, and you’re doing nothing.”

Amid these lamentations, Stevenson remains a man of hope, love, and conviction. The true measure of our character, he is convinced, is proved through how we treat the poor, disfavored, incarcerated, and condemned.

Christianity Today asked Dominique DuBois Gilliard, director of racial righteousness and reconciliation for the Evangelical Covenant Church and author of Rethinking Incarceration, to talk to Bryan Stevenson about his work and hopes for the film. This interview has been edited for length and clarity.

What is the significance of the timing of the film’s release?

This is a critical time in our nation’s history. We’ve been so divided by the politics of fear and anger that it’s easy to stop caring about things we should care about. It’s easy to tolerate things we shouldn’t tolerate. And the way you combat that is to get people closer to inequality, to injustice, to things that are unfair. And that’s what story-making can do. That’s what films can do.

I’ve always loved the power of cinema to draw you into someone else’s life, someone else’s experience, and open your eyes and your heart to things that you need to see and feel. And that’s what I’m hoping to happen with this movie.

We have the highest rate of incarceration in the world. We have an incredibly extreme and harsh carceral system that treats a lot of people unfairly. A lot of people are vulnerable or exploited and abused. And I’d love to see that change, but it won’t change until people understand the cost of that. I’m hoping that the film will create an opportunity for them to feel the pain of inequality and injustice, but also the triumph of what can happen when we fight and we work. I am really thrilled that it’s happening at this moment when I think we are desperately in need of increasing the justice quotient in our nation.

There were two quotes that were really jarring for me in the film. One is when the other lawyer says, “If you go digging into those wounds, you’re going to make a lot of people very angry.” And, “When people care about a thing that much, they’re willing to do anything to get what they want.” What does it take to have the courage to pursue truth in a climate of fear, especially when you understand the cost of your choice? 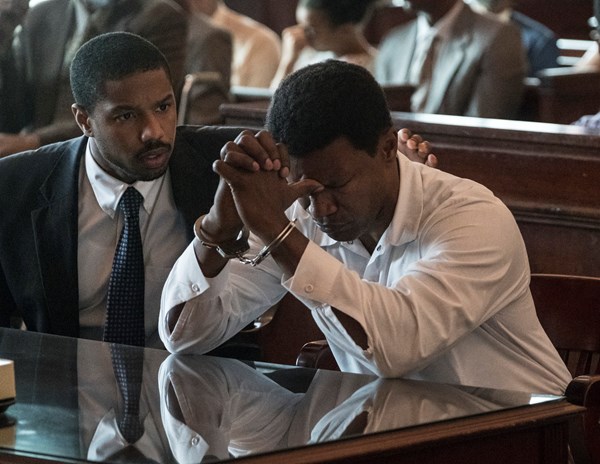 I’m a product of a community where people were marginalized, poor, excluded. We had to learn to believe things we hadn’t seen, and my faith reinforced that. People don’t like when they are forced to confront things that aren’t pleasant, that are unhappy. But we have to do that. And I actually think people of faith have a critical role at that. We understand that if we want to get to a better place, if we want redemption, if we want restoration, that there has to be confession, there has to be repentance. We cannot be afraid to acknowledge wrongdoing, mistakes we’ve made—we understand that personally. We seem to understand it in our places of worship, but we don’t seem to see much evidence of that in the political and the cultural social spaces. And I just think that has to change.

But I am standing on the shoulders of people who have done so much more with so much less. In Montgomery, there’s a whole history of people courageously fighting the things that need to be fought. The generation before me would put on their Sunday best and go into a space where they knew they would likely be battered and bloodied and bruised, but they went anyway. And with that history in my head and that knowledge, I could feel like I’ve got to do the things that have to be done. And it’s part of what struggle requires.

Vladimir Leposavic on Establishing the Freedom of Belief in Montenegro