Fifteen minutes before the store opens, the staff of the Greatest Gift and Scripture Supply gathers to pray. They open the small box they keep at the front of the store for customers to leave prayer requests. Some days there are 10. Some days, 15. Today the box is empty.

“We’ll just pray for all the unspoken prayers,” says Heather Trost, owner of the Pueblo, Colorado, bookstore. The staff close their eyes. Some of them are wearing buttons that say, May I pray for you? For a moment, the store is quiet.

Trost has an unspoken prayer. Today, she’d like to sell more Bibles.

It’s been a hard year for the Greatest Gift. Running a Christian bookstore can seem like a business of hard years. It’s no secret the whole industry is struggling.

In the last two decades, more than 5,200 evangelical bookstores have gone out of business. Trost knows how easily one hard year—a tough Christmas season, an economic downturn, a personal health issue—can be the last.

The Greatest Gift started in 1949, part of a boom of new commercial activity after World War II. The evangelical book industry flourished in the 1950s, organized by a new group called the Christian Booksellers Association (CBA) to serve the growing number of Americans who identified with the Christianity of Billy Graham.

In the midst of those successes, though, there were hints of darker days to come. Walmart and Sam’s Club started selling evangelical books like Left Behind, The Prayer of Jabez, and The Purpose Driven Life. Those became mega-bestsellers, but the big retailers also demanded bigger discounts from publishers, in turn undercutting prices at evangelical bookstores. The big stores also sold fewer titles, so publishers increasingly looked for authors with some celebrity or platform, making it harder for unknown writers to break into the market.

Amazon—then a new internet startup—also started to sell books online in 1995. By 2004, it sold about 20 percent of all books in America, and local booksellers started to feel the pinch. The growth of new evangelical bookstores reached a tipping point in 2007 when more stores closed than opened. The next year, the financial crisis hit, and a wave of stores went out of business.

Attendance at the CBA’s annual trade show dropped from 15,000 in 1999 to only 5,000 in 2010. The total number of stores dropped to 2,800, and it kept going down. Family Christian, the largest chain of evangelical stores, closed in 2016, shuttering 240 locations. The next largest chain, LifeWay Christian Stores, the retail arm of LifeWay Christian Resources, announced in January 2019 that it would close most of its brick-and-mortar outlets. Two months later, the decision came to close all 170.

Running a ministry as a business

Today, about 1,800 stores like the Greatest Gift and Scripture Supply remain in the country. Earlier this year, some customers idly asked Trost when her store was going out of business. They just assumed it was.

Then there was more bad news for the industry: The trade association itself closed. A new president had taken over the CBA with big plans and money to invest, but in June 2019 he suddenly said it was “beyond fixable” and ended the 69-year-old organization.

Trost was on the CBA board, and she doesn’t know what happened. With a last-ditch effort at industry optimism gone, the despair really hit.

“June, July, and August, those are hard months to get through for every retail store, so that was really scary this year when I got depressed in June,” Trost says. “But we have a stance that we speak life. God’s got us. We don’t have to speak about the bad stuff. God’s got us.”

The evangelical book industry is a business. To survive, it has to make money. To make money, it has to adapt to changing market pressures. The numbers have to work eventually, even when they seem impossible based on years of industry decline.

But the evangelical book industry is also not a business. It’s a ministry. The people involved say they feel called by God to put these books out into the world. With God all things are possible, so they have faith they can make it work—against the odds, despite the market, and undaunted by the numbers.

In August, Trost and her husband, Carl, attended the Christian Product Expo in Murfreesboro, Tennessee. It’s a new trade show that promoters hope will replace the CBA, but there were only about 800 people there. The first morning, the Trosts heard “industry updates” from a panel of experts on the future of evangelical retail. 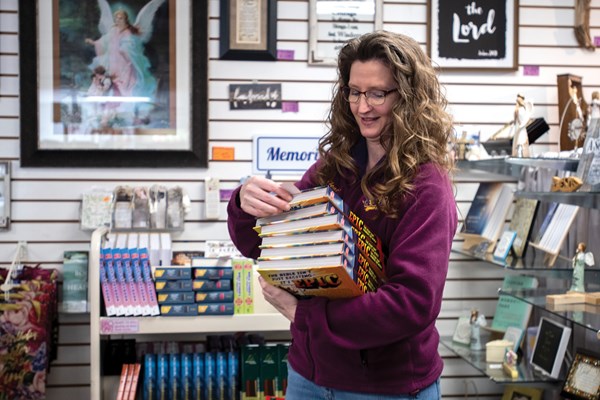 Sitting in the back of the hotel conference room, Carl Trost couldn’t think of much that would make him feel optimistic at this point.

Then more seriously, he added, “It’s real hard. I don’t know how we’re going to do it.”

The panel of experts mostly agreed. There’s no denying times have changed—and there’s no easy solution to save struggling stores.

“It’s been years since a store owner could just put up a sign and have people come in,” said Becky Gorczyca, the executive director of Logos Bookstores, an association of independent evangelical retailers. “You have a couple of choices. You can give up or you can readjust and renew your vision and decide to serve the believers in your community.”

The other experts offered similar advice. Tom Knight, of HarperCollins Christian Publishing, told retailers to focus on the store environment. “Make your store a special place,” he said. “Make your place a place where people want to come for advice, to spend time. Your store is a special refuge.”

Shawn Everson, the chief commercial officer for Ingram Content Group, a book distributor, said Christian bookstores have to accept that Amazon will beat them on price and offer something else: events, community, and curated content.

Industry leaders envision Christian bookstores that are able to keep local customers loyal because they provide a personalized experience.

“Big box stores, they don’t have people out there thinking of specific customers, thinking of ‘Sue,’ curating an experience specifically for her,” said Amelia Nizynski, product director for DaySpring, a Christian gifts and home decor company owned by Hallmark.

This vision for independent Christian stores isn’t that different from what experts were suggesting in 2008, before the worst declines.

No one at the conference said it out loud, but the advice came with a whiff of foreboding. This could work, the experts seemed to tell the evangelical retailers. But it might not. You might be doomed.