The Federation of Swiss Protestant Churches, a Reformed association uniting 26 member churches and nearly 1,000 congregations, voted during a nationwide assembly this week to allow same-sex marriages.

The federation’s assembly of delegates voted 46 to 11 this week in support of “marriage for all” proposals introduced earlier this year, according to a press release.

“The delegates recommend that the member churches presuppose the opening of marriage for same-sex couples at civil law level, as well as the possibly new civil law concept of marriage for the church wedding,” the release explains.

The delegates also voted in favor of recommending that member churches respect the freedom of conscience of pastors and allow individual pastors to make their own decisions whether or not they will officiate same-sex weddings.

This week’s vote comes after the Council of the Federation of Swiss Protestant Churches in August endorsed the proposal to open up civil marriages to same-sex couples and treat them with the “same liturgical celebration” used in the weddings of heterosexual couples.

“The member churches gathered together in the Federation of Swiss Protestant Churches agree that the fullness of the divine act of creation is reflected in the variety of sexual orientations,” a draft of the legislation reads.

In June, the federation’s assembly of delegates adopted an official position stating that “God wants us the way we were created.”

“We cannot choose our sexual orientation,” the assembly’s position statement reads. “We see it as an expression of created abundance.”

Although the assembly voted overwhelmingly in favor of affirming same-sex marriages, the vote followed a lively debate, according to Livenet.ch. 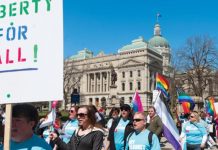 Dave Welch: Pro-LGBT ‘Fairness for All’ Legislation Adopted by National Association of Evangelicals and Council for Christian Colleges and Universities Will Result in ‘Special...

President-elect Trump Picks Ken Blackwell, Who Happens to be Black and Is Against Homosexuality and Homosexual Marriage, as His Domestic Policy Adviser; We at...