As the 185 Catholic bishops who met to discuss the Amazon region broke into small working groups for the second week of the synod, the topics they would tackle included dwindling vocations, the role of women and married men in the Church and the rights of indigenous peoples. But if the small-group participants agreed on the problems, the reports from the “circoli minori” showed how wide a difference there was in approaches to possible solutions.

The ideas generated by the 12 groups, which divided the bishops and the synod’s lay and religious participants according to language, will be presented to Pope Francis as recommendations, said Father Giacomo Costa, who heads the Vatican’s Information Commission, at a press briefing Friday (Oct. 18), emphasizing that the “synod is not a deliberative organism.”

The pope will have plenty of food for thought. With the goal being to provide the sacraments and a greater pastoral presence in the Amazon, the groups urged Francis to consider everything from the ordination of women as deacons, who may preach but not perform sacraments, to the creation of a separate rite for the region, like those in the Eastern Church that allow priests to be married.

“It’s obvious that the debate and discussion are open, we try to listen to the differences because everyone has something important to say,” said Costa.

Here is a roundup of the ideas the groups discussed in the synod’s second week:

Growing attention to the role of women

According to Colombian Capuchin Sister Daniela Adriana Cannavina, “attention toward (the role of) women grew as the synodal work proceeded,” which was reflected in attention dedicated to the topic in the small-group reports.

“It’s time to answer the need to renew our presence in the Amazon context,” she told reporters at the conference. “We must give women a more consolidated role.” 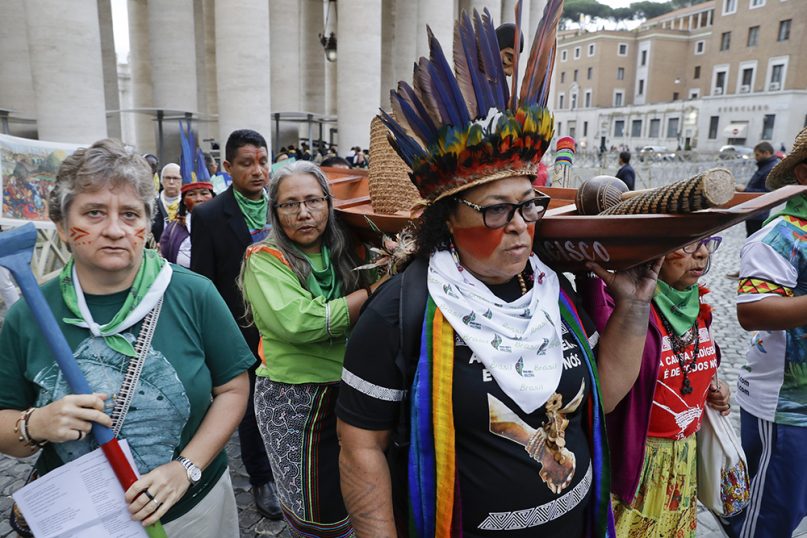 Participants in the Amazon synod arrive in St. Peter’s Square at the Vatican on Oct. 7, 2019. (AP Photo/Andrew Medichini)

In their report, Portuguese group A called the need for new ordained ministers “necessary and urgent,” especially taking into consideration the “debt” the Catholic Church owes the Amazon region for its role in past and recent colonization.

“We ask the Holy Father to allow the ordination of men to priestly ministry and women to the diaconate,” especially for “respected and recognized” members of the indigenous communities regardless of whether they are married or have a family, the Portuguese group wrote in what was the most hard-hitting section of the report on the topic of ordination.

“This way,” they added, “we will give a feminine and maternal face to the Church.”

Spanish group A also supported women deacons, especially in light of the overrepresentation of women in the Amazon. “There are still discrimination against the feminine world reflected in the decision-making spaces of the Church,” its report said.

The Italian group called for allowing women to have access to lay ministries, given “adequate formation and preparation.”

Bishops from the Amazon region instead called on the Holy See to create new ministries that would draw on existing community leaders, whether male or female.

While agreeing with the basic issues driving the other groups’ ideas for the role of women in the Church, other groups (particularly Spanish and Portuguese speakers) insisted that more “reflection and deepening” are needed and encouraged “further study on this matter by looking primarily at future possibilities, rather than ancient history.”

Thomas Reese on Baptism for Mission, Not Only the Remission of Sins