A Mother Teresa of Calcutta research scholar in the United Kingdom was honoured with a prestigious award from Albanian government in London on 2nd October 2019.

Matters India (http://mattersindia.com) reports the Ambassador of Albania to the UK, His Excellency Qirjako Qirko, handed over the Albanian Nation’s Ambassador Award, bestowed by the Prime Minister of Albania Edi Rama and the Minister of State for Diaspora Pandeli Majko, to Mother Teresa author Dr Gëzim Alpion of the University of Birmingham.

Mother Teresa was born as Gonxhe Agnes Bojaxhiu to ethnic Albanian parents in Skopje, Macedonia, on August 26, 1910. At 18, she left home and joined the Sisters of Loreto in Ireland and arrived in India on 6 January 1929.

Ambassador Qirko told Matters India that the reasons for conferring the award include: “Professor Alpion’s 20 years of scholarly dedication to Mother Teresa’s life, work and legacy; his lobbying for the canonization of Mother Teresa from 2014 to 2016; and his ongoing lobbying for the construction of the Arbëri Highway, which will shorten considerably the distance between Skopje, Mother Teresa’s birthplace, and Tirana, and will benefit Albania, as well as Macedonia, Kosova and Bulgaria. Professor Alpion’s contribution in this respect is valued by the Government of Albania.”

Christians Celebrate the Feast of Epiphany, Marking the Coming of the Wise Men to Baby Jesus

WATCH: French Bulldog Gets Stuck in a Tree While Obeying Owner’s Command to Jump

5,000 Christians Meet in Jerusalem to Celebrate Feast of Tabernacles and Show Support in Israel

In Bulgaria, Pope Francis Meets Opposition as Country’s Orthodox Church Declares There ‘Must Be No Compromises’ 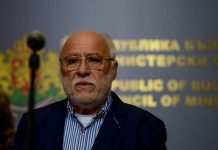