Drake’s father claims the rapper has lied about him being an absentee father to sell records, to which his musician son responded, “The truth is hard for some people to accept.”

The father, Dennis Graham, made the claim during a recent appearance on Nick Cannon’s “Close Conversations” show on Los Angeles’ Power 106 radio station.

During the interview, Cannon told Graham that his father was not always present while he was growing up.

“I have a very similar situation to where my mother was a single mother and had to do a lot on her own,” Cannon said. “There was a large amount of time where my father wasn’t around.”

Cannon said that he and his father are “super cool” now, and asked Graham if he could relate. “We hear it in his lyrics sometimes,” the host said, referring to Drake.

Graham told Cannon that he had a “deep conversation” with Drake about this.

“I have always been with Drake,” Graham said. “I talk to him, if not every day, every other day. And we really got into a deep conversation about that. I said, ‘Drake, why are you saying all this stuff about me, man? Like, this is not cool.'”

Graham claims the rapper told him: “Dad, it sells records,” and that he responded, “OK, cool. Talk about me.”

Graham and Cannon then laugh, and Cannon said he wishes his father was as understanding.

Drake, 32, has previously said in interviews and in his songs, that he grew up in his native Toronto without his father at times.

Drake, whose real name is Aubrey Graham, responded to his father’s remarks in an Instagram story Tuesday, and said he stands by the authenticity of his lyrics.

“Woke up today so hurt man,” he wrote. “My father will say anything to anyone that’s willing to listen to him. It’s sad when family gets like this but what can we really do, that’s the people we are stuck with… every bar I ever spit was the truth and the truth is hard for some people to accept.”

In a 2011 interview with Complex, Drake said, “I didn’t have a father, because he was in jail two separate times.” Drake said his father did sentences of two and three years in jail.

He also referenced their relationship in the 2011 track, “Look What You’ve Done,” in which Drake rapped: “And my father living in Memphis now, he can’t come this way, over some minor charges and child support, that just wasn’t paid, damn.” 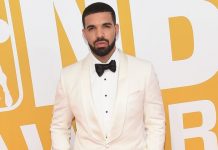 Drake Breaks Another Beatles’ Record. This Time, for Most Top 10 Songs in a Calendar Year