The Latest on the U.N. General Assembly’s annual gathering of world leaders (all times local):

Venezuela’s vice president is condemning the U.S. and more than 50 other countries that recognized opposition leader Juan Guaidó as Venezuela’s rightful president, calling it the “worst mistake in the diplomatic history of these countries.”

Vice President Delcy Rodriguez told the U.N. General Assembly on Friday that she came on “behalf of the only Venezuela,” an apparent reference to a rival delegation of diplomats that Guaidó sent to the annual gathering of world leaders.

She condemned U.S. sanctions “focused on strangling the Venezuelan economy” but made little reference to years of hyperinflation, power outages and food and medicine shortages that have driven more than 4 million people to flee the once relatively prosperous country. She later told reporters that the number — a U.N. estimate — “is a lie.”

Malaysian Prime Minister Mahathir Mohamad is taking the United Nations to task for failing to prevent wars and criticizing the countries of the Security Council for giving themselves the “the right practically to rule the world.”

Mahathir painted a picture at the U.N. General Assembly on Friday of a world in which the rich countries do what they please — writing the trade laws, imposing sanctions, imposing democracy — while less-powerful countries struggle.

Mahathir particularly railed against the veto power held by the five permanent members of the U.N. Security Council. He said: “It ensured that all solutions to all conflicts could be negated by any one of them.”

He said that though the U.N. has failed to prevent wars, it has done better in helping to reduce poverty.

The U.S. says Iran’s foreign minister will be allowed to visit a colleague at a New York hospital only if Tehran releases an American citizen.

Diplomats at the United Nations say Mohammad Javad Zarif, who is in New York for an annual U.N. gathering, had hoped to visit Iran’s U. N. Ambassador Majid Takht Ravanchi who is being treated for cancer.

Zarif, whose movements in the U.S. are limited, requested permission from the U.S. The State Department responded by saying that Iran must first free a U.S. citizen.

“Iran has wrongfully detained several U.S. citizens for years, to the pain of their families and friends they cannot freely visit,” the State Department said. “We have relayed to the Iranian Mission that the travel request will be granted if Iran releases a U.S. citizen.”

As the Bahamas strives to recover from Hurricane Dorian, the prime minister is pleading with the international community to tackle climate change — and encouraging travelers to visit to help the island nation rebuild.

Hubert Minnis told the U.N. General Assembly on Friday that the Sept. 1 storm was “a generational tragedy” for his country. He portrayed it as an illustration of how warming ocean waters can become “instruments of death and destruction.”

One of the strongest Atlantic hurricanes ever recorded, Dorian razed parts of the Bahamas. Minnis says the death toll currently stands at 56, with 600 people still missing.

But other areas in the island chain weren’t affected, and Minnis says visits by tourists will play a vital role in helping the Bahamas rebuild the devastated places.

Russia’s foreign minister is taking aim at the West, saying its philosophies are out of step with the times.

Sergei Lavrov says “it is hard for the West to accept seeing its centuries-long dominance in world affairs diminishing.” He spoke in a pointed address at the U.N. General Assembly.

Lavrov also says some Western countries “are trying to impede the development of a polycentric world.”

He also criticized NATO’s decision to attack Libya, which he says split the country apart. He says the West “has its own rules in the Balkans” as well. And under Western intervention, he says, Venezuela’s “statehood was destroyed before our eyes.”

The term “the West,” when said by Russian officials, typically refers to the United States and its sphere of influence in Europe.

Wang’s remarks Friday before the U.N. General Assembly came as China and the United States find themselves involved in a tariff war that threatens global economic growth.

Beijing is offering to narrow its trade surplus with the United States by purchasing more American exports. But Chinese leaders are resisting pressure to roll back technology plans that their trading partners say violate Beijing’s free-trade commitments and hurt foreign competitors.

In an apparent warning to the United States, Wang said that tariffs and provocations “may even plunge the world into recession.”

Pakistani Prime Minister Imran Khan is urging the world to respond to India’s crackdown in the disputed region of Kashmir and warning of the potential outcome “when a nuclear-armed country fights to the end.”

Khan told the U.N. General Assembly on Friday that such a fight “will have consequences for the world.”

He says that’s not a threat, but a “fair worry.” He says the U.N. has a responsibility to take action, particularly to get India to lift a sweeping military curfew in Kashmir.

The region is divided between India and Pakistan, but the nuclear-armed neighbors both claim Kashmir in its entirety. Indian Prime Minister Narendra Modi recently stripped the Indian-controlled part of Kashmir of its limited autonomy.

He made no mention of Kashmir in his own General Assembly speech Friday.

Pakistani Prime Minister Imran Khan has denounced India’s crackdown in Kashmir and warned of a “bloodbath” in the disputed region.

Khan said Friday at the United Nations General Assembly that with 900,000 Indian troops once a curfew is lifted Kashmiris ” will be out in the streets. And what will the soldiers do? They will shoot them.”

Modi said that India’s “voice against terrorism to alert the world about its evil rings with seriousness and outrage.”

Khan bluntly warned that war was possible over India’s actions in Kashmir.

The nuclear-armed rivals, which have fought two of their three wars over Kashmir, have been locked in a worsening standoff since Aug. 5, when Modi stripped the portion of Kashmir that India controls of its limited autonomy.

Modi’s Hindu nationalist-led government imposed a sweeping military curfew and cut off residents in the Muslim-majority region from virtually all communications.

Indian Prime Minister Narendra Modi has denounced terrorism but avoided any mention of India’s crackdown in the disputed Himalayan region of Kashmir.

Modi told world leaders gathered Friday at the United Nations General Assembly that India’s “voice against terrorism to alert the world about its evil rings with seriousness and outrage.”

The nuclear-armed rivals, which have fought two of their three wars over Kashmir, have been locked in a worsening standoff since Aug. 5, when Modi stripped the portion of Kashmir that India controls of its limited autonomy.

Modi’s Hindu nationalist-led government imposed a sweeping military curfew and cut off residents in the Muslim-majority region from virtually all communications.

A North Korean Foreign Ministry adviser is accusing the United States of doing nothing to implement the issues agreed on at summits between U.S. President Donald Trump and the country’s leader Kim Jong Un, but says he is putting his hope on Trump’s “wise option and bold decision.”

A statement from Kim Kye Gwan circulated Friday by North Korea’s U.N. Mission says it is “hard reality” that politicians in Washington are obsessed with nuclear disarmament before there can be any talk of lifting sanctions and North Korea “can get access to a bright future.”

The adviser said this makes him doubt whether “a new breakthrough” could take place in U.S.-North Korean relations through another summit.

But the adviser said “I came to know that president Trump is different from his predecessors in political sense and decision while watching his approach” to North Korea “so I would like to place my hope on president Trump’s wise option and bold decision.”

Saudi Arabia urged the world to apply “utmost pressure” on Iran, while Tehran dismissed that policy as already having failed.

Saudi Foreign Minister Ibrahim al-Assaf took the stage Thursday at the U.N. General Assembly and urged world leaders to cut off Iran’s financial resources. But across town, Iranian President Hassan Rouhani insisted that would kill all chances of successful negotiations. 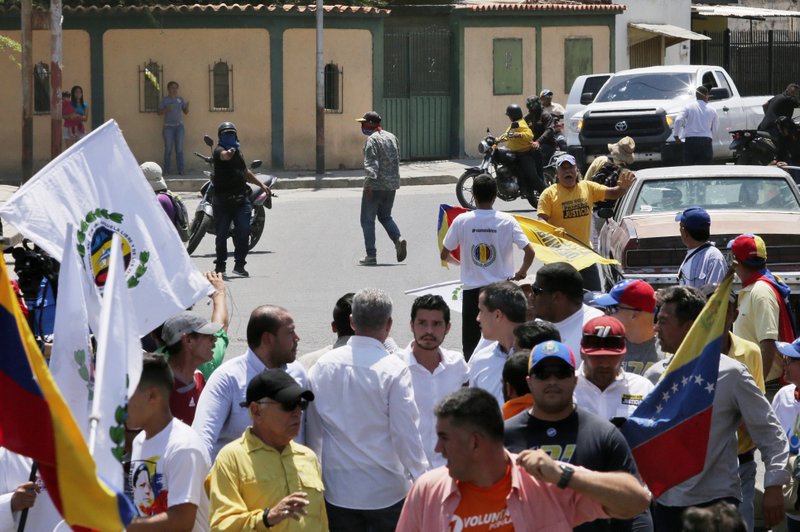