Rapper Tip ‘T.I.’ Harris rang in his 39th birthday with a big bash in his hometown.

T.I. and his wife Tameka ‘Tiny’ Harris packed on the PDA at his birthday soiree thrown at The Brasserie Atlanta on Wednesday in Atlanta, Georgia.

The star’s party came days after he spoke out about feeling ‘exploited’ while attending Kanye West’s recent Sunday Service in the city.

The Ant Man actor looked dapper at the event dressed in a classic cream colored button up shirt under a tailored cream suit paired with brown shoes and modified aviator sunglasses.

His family was there to share in the fun, including his on-again wife Tiny and their children.

Her long braids of blonde and brunette reached nearly to her knees and she went with a face of glamorous makeup.

T.I. and Tiny posed together for several photos and were spotted sharing a few kisses during the fun.

The pair have reconciled after Tiny filed for divorce in 2016 following 15 years together as a couple and six years married.

Party goers sipped cocktails and champagne alongside the “Whatever You Like” rapper and enjoyed a slice of his impressive black and white tiered birthday cake with an edible baseball hat and a crown on top.

Real Housewives of Atlanta star Phaedra Parks appeared to enjoy herself at the celebration and posed for some snaps with Tiny wearing a tight hot pink cocktail dress.

Tiny took to social media to send her love a special birthday message.

‘Happy birthday to my husband, my best friend!! Thank you for loving me like no one else can,’ she said.

‘As I’ve always said u are the man of my dreams. 20yrs strong & we loving on each other like we just met.

‘Thank you for being the best you!! You complete me… celebrating you everyday!!’

He shared a photo from the front row that showed him looking disgusted at a portion the event and said on social media that he would tell fans why he was making that face on his podcast.

‘Yeaaahhh Maaaan We MUST discuss what caused this look on my face in Sunday Service…. #Expeditiously.,’ he wrote.

As promised, T.I. addressed the photo during the most recent episode of ExpediTIously: ‘I cut my fellowshiping short at Magic City to get 45 minutes of sleep to drive by here and be accosted and basically exploited.’

The entrepreneur was intimating that he felt like the pastor was trying to take advantage of his deep pockets.

Adding: ‘I will not be extorted.’ 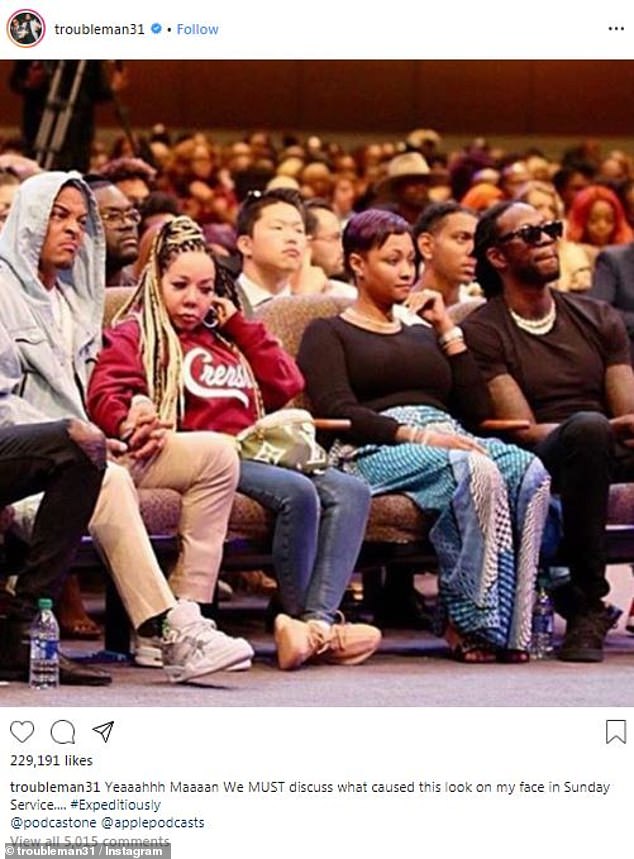 Shade: Last week, T.I. shared a photo from Kanye’s Sunday Service that showed him looking disgusted and later said he felt like the pastor tried to ‘exploit’ and ‘extort’ him

The pastor responded to the criticism claiming that he was more interested in the rapper’s life than his ‘life savings.’

Next month the star will debut his new rap competition series on Netflix, Rhythm + Flow, where he will serve as a judge alongside Chance the Rapper and Cardi B.

The show will be released on Netflix in several episode chunks starting October 9.