A fire that destroyed an ancient Holy Land church near the Sea of Galilee around 700 CE appears to have preserved the church’s beautiful mosaic floor, which includes depictions of baskets, loaves and fish as well as inscriptions.

The floor was protected by a layer of ash and the remains of the church’s collapsed roof.

According to the Gospel of John, it was at the Sea of Galilee that Jesus fed 5,000 people with five loaves and two fish, a miracle Christians call the Feeding of the Multitude.

The miracle is mentioned four times in the New Testament. 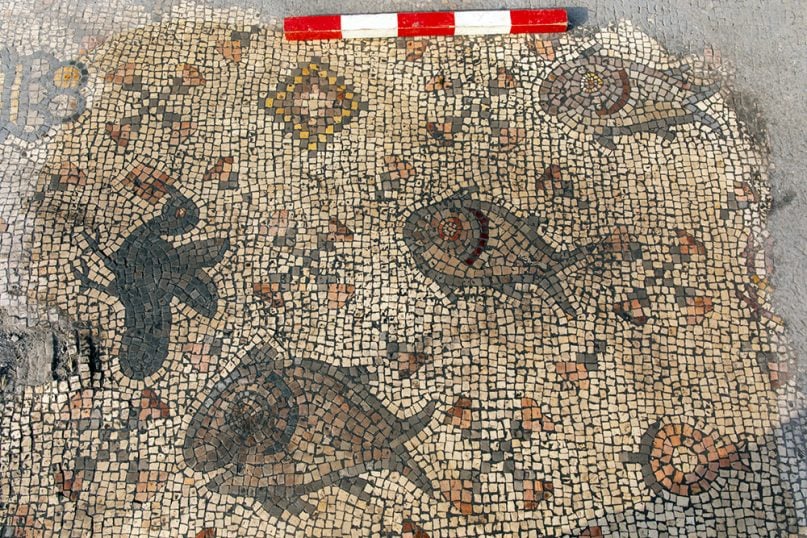 Three fish of different sizes make up the decorations of the mosaic floor of the Burnt Church. Photo by Dr. Michael Eisenberg

In 2005, University of Haifa archaeologists first discovered part of the so-called Burnt Church, built in the 5th century CE and located in the ancient city of Hippos in Northern Israel, but only began excavating it in earnest this summer.

Located 2 kilometers from the Sea of Galilee, Hippos — which affords a breathtaking view of the sea — was the central city of the region during Roman and Byzantine times.

“There can certainly be different explanations to the descriptions of loaves and fish in the mosaic, but you cannot ignore the similarity to the description in the New Testament: for example, from the fact that the New Testament has a description of five loaves in a basket or the two fish depicted in the apse, as we find in the mosaic,” said Michael Eisenberg, head of the excavation team in Hippos on behalf of Haifa University’s Institute of Archaeology.

Brian Stiller Shares a Glimpse of Christianity in the Holy Land

165,000 Christians Expected to Travel to Israel to Celebrate Christmas

Tom Meyer on How to Memorize Scripture

John Stonestreet and G. Shane Morris on Visiting the Land of Our Faith in Israel