An Army veteran, a 15-year-old boy and a hero mother were among 20 victims of Saturday’s shooting at a Walmart in El Paso, Texas.

A gunman, identified by police as Patrick Crusius, opened fire on the crowded store in what authorities are calling an act of domestic terrorism.

The shooter targeted the super-store at the Cielo Vista Mall, a popular shopping destination for people both sides of the US-Mexico border.

Less than 20 minutes before the shooting, Crusius allegedly uploaded a twisted and seething anti-immigrant manifesto to an online forum outlining his sickening motives and revealing that he intended to target Hispanics.

At least 20 people were killed and 26 more were injured before Crusius was arrested.

Witnesses have told how Crusius displayed no expression as he fired at victims.

‘He didn’t show no remorse.’

Mexican authorities confirmed that seven Mexican nationals were among those killed.

US Army veteran Arturo Benavides, 60, had been shopping with his wife when gunfire erupted. She managed to escape, but her husband did not.

Several family members posted to social media over Saturday and Sunday looking for information about the man they knew as ‘Turi’. They were heartbroken to learn that he was among the victims.

Benavides’ niece, Jacklin Luna, described her uncle as ‘a strong-willed, caring, giving, and special person’ who well known in the community in the years he spent as a Sun Metro bus driver.

‘He was the person to always give a helping hand, a home to stay, and a meal,’ Luna told Buzzfeed of her uncle on Sunday.

‘He loved each and every one of us in our own ways. Loved oldies on a Sunday morning, sitting out on his chair in the front porch with his dog Milo at his feet.’

Hero mom Jordan Anchondo, 25, was killed while shielding her two-month-old son from bullets.

She was shopping for back-to-school supplies when the attack happened.

Anchondo’s heartbroken sister Leta Jamrowski said the mother-of-three fell on top of the infant as she was shot. The boy suffered broken bones and is being treated in a hospital.

‘From the baby’s injuries, they said that more than likely my sister was trying to shield him,’ Jamrowski, 19, told the Associated Press.

‘So when she got shot she was holding him and she fell on him, so that’s why he broke some of his bones.

‘He pretty much lived because she gave her life.’

Jordan’s husband Andre was also killed in the attack, the family confirmed Sunday.

A friend recalled that he had recently turned his life around after struggles with drug dependence and run-ins with the law.

The friend, Koteiba “Koti” Azzam said: ‘I love the guy. He had the character and the charisma.

Azzam said Anchondo had started a business in El Paso, building things from granite and stone, and made it successful through hard work.

He also was on the verge of completing a home he was building for his family.

In addition to their two-month-old son, the couple also share two daughters.

Her son Will Englisbee told CNN that his brother last spoke to their mother by cell phone while she waited in line at Walmart, just minutes before the shooting.

Her granddaughter Mia told the New York Times that Angie had seven children and a son who died in infancy. She raised her children alone after her husband died of a heart attack.

Mia said: ‘She was a very strong person, very blunt. It feels like hell — it doesn’t feel real.’

Javier Rodriguez, 15, was identified by his aunt, Elvira Rodriguez, on Sunday afternoon.

She shared a photo of the boy on Facebook asking for any information about her nephew, only to follow it up two hours later with a confirmation of his death.

‘Thank you to everybody who helped us search for my nephew. We found him,’ she wrote.

Leonardo Campos, Jr, was one of those killed in the attack, the Pharr-San Juan-Alamo school district said.

A statement to the Monitor said: ‘The PSJA Family is sad to hear reports of the loss of one of our own, PSJA High School Class of 1996 Alum Leonardo Campos, Jr., during yesterday’s tragic shooting in El Paso’.

It is also thought that Campos’ wife was killed in the attack.

A friend posted on Facebook: ‘Leo, you were a great friend and always with a big heart. We are going to miss you brother.’

Mexican authorities confirmed that seven of their nationals were among those killed.

The children of Sara and Adolfo announced on Facebook that their parents had been killed in the attack.

The family of Gloria Irma Marquez confirmed online that she had been killed.

They wrote online: ‘Gloria was a dedicated mother, grandmother and friend.’

Jorge Calvillo Garcia, was confirmed among the dead by mayor Jorge Zermeño Infante of Torreón, Coahuila.

The mayor wrote on Facebook: ‘God comfort his family and friends, as well as all those affected with this event.’

María Eugenia Legarreta Rothe, originally from Chihuahua, was confirmed killed by her sister, who wrote online: ‘It’s something I can’t assimilate’.

María had reportedly gone to El Paso to pick her daughter up from the airport, but had stopped at Walmart to do some shopping first.

Ivan Filiberto Manzano, of Ciudad Juarez, was confirmed killed by by Mexican authorities.

He had two children, aged five and nine.

Elsa Mendoza de la Mora, of the city of Yepomera, was a teacher and principal of Jaime Torres Bodet Elementary School.

She had gone into the Walmart to buy some items, while her husband and son waited in the car, her family told Mexican newspaper Milenio .

Former students described her as ‘an excellent teacher loved by all’. 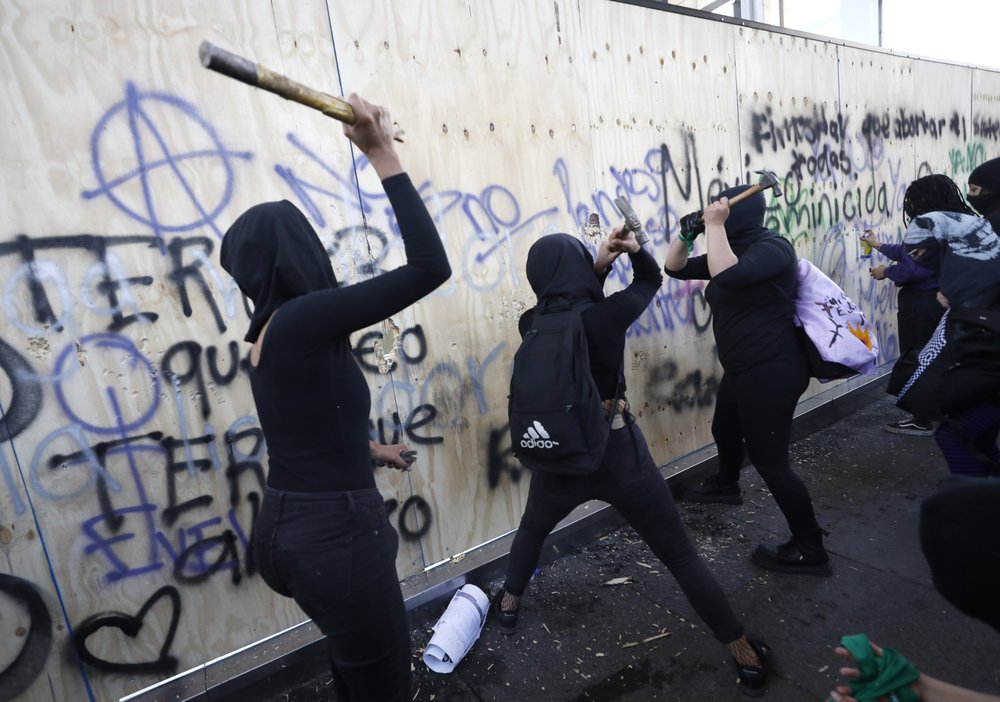 The Latest: Mexico and Russia to discuss vaccine supply