Justice Ruth Bader Ginsburg has completed radiation therapy for a cancerous tumor on her pancreas and there is no evidence of the disease remaining, according to the Supreme Court.

It is the fourth time that the 86-year-old justice has announced that she has been treated for cancer over the last two decades and follows lung cancer surgery in December that kept her away from the court for weeks. December’s surgery was her first illness-related absence from the court since being appointed by President Bill Clinton in 1993 and prompted even closer attention to her health.

As the court’s oldest member, Ginsburg has been asked questions for years about her health and retirement plans. She has also in recent years attracted particularly enthusiastic fans as the leader of the liberal wing of the court, which includes four members appointed by Democratic presidents and five by Republicans. Both liberals and conservatives watch her health closely because it’s understood the court would shift right for decades if President Donald Trump were to get the ability to nominate someone to replace her.

The court kept Ginsburg’s latest cancer secret for three weeks, until she finished radiation treatment. Yet there is no obligation for justices to disclose details about their health, and Ginsburg has generally made more information available than some of her colleagues. Retired Justice Anthony Kennedy, for example, had a stent inserted to open a blocked artery in 2005 but the public only learned about it 10 months later when he returned to the hospital to have it replaced.

The Supreme Court said in a statement Friday that a routine blood test led to the detection of Ginsburg’s tumor. A biopsy performed July 31 confirmed a “localized malignant tumor,” and Ginsburg started outpatient radiation therapy Aug. 5. Ginsburg underwent three weeks of radiation therapy and as part of her treatment had a bile duct stent placed, the court said. Ginsburg “tolerated treatment well” and does not need any additional treatment but will continue to have periodic blood tests and scans, the statement said.

The tumor was “treated definitively and there is no evidence of disease elsewhere in the body,” the court said.

The statement did not say if the new tumor is a recurrence of the pancreatic cancer Ginsburg was diagnosed with in 2009, or a new cancer that arose. She was also treated for colorectal cancer in 1999.

“It’s certainly not unheard of for the cancer to come back,” but it’s a more dire situation if it’s that rather than a new tumor that was found early enough for effective treatment, said Dr. Michael Pishvaian, a pancreatic specialist at the University of Texas MD Anderson Cancer Center who had no firsthand knowledge of Ginsburg’s care.

Pancreatic tumors are usually treated with surgery, but she or her doctors may have chosen not to do that for various reasons, and radiation is a standard treatment if surgery is not done, Pishvaian said.

Dr. Alan Venook, a University of California, San Francisco, pancreatic cancer specialist who also has no direct knowledge of Ginsburg’s case, said it’s not possible to know much about her outlook without details from her doctors.

If it is a recurrence that took a decade to form, “that tells me it’s not a very aggressive cancer,” he said. If the cancer is truly limited to the pancreas, “it could have been managed perfectly well with radiation,” he said.

The court said Ginsburg canceled an annual summer visit to Santa Fe but otherwise maintained an active schedule during treatment. She is scheduled to speak in Buffalo next week and at the Library of Congress National Book Festival in Washington at the end of the month.

Before Friday’s announcement, Ginsburg’s most recent known health scare was in December, when she had surgery for lung cancer. The cancerous growths were found when Ginsburg underwent medical tests after she fell in her court office and broke three ribs in November. Ginsburg was absent from the court in January as she recovered from surgery and missed six days on which the court heard a total of 11 arguments. But she returned to the bench in February, and participated in the court’s work during her absence. 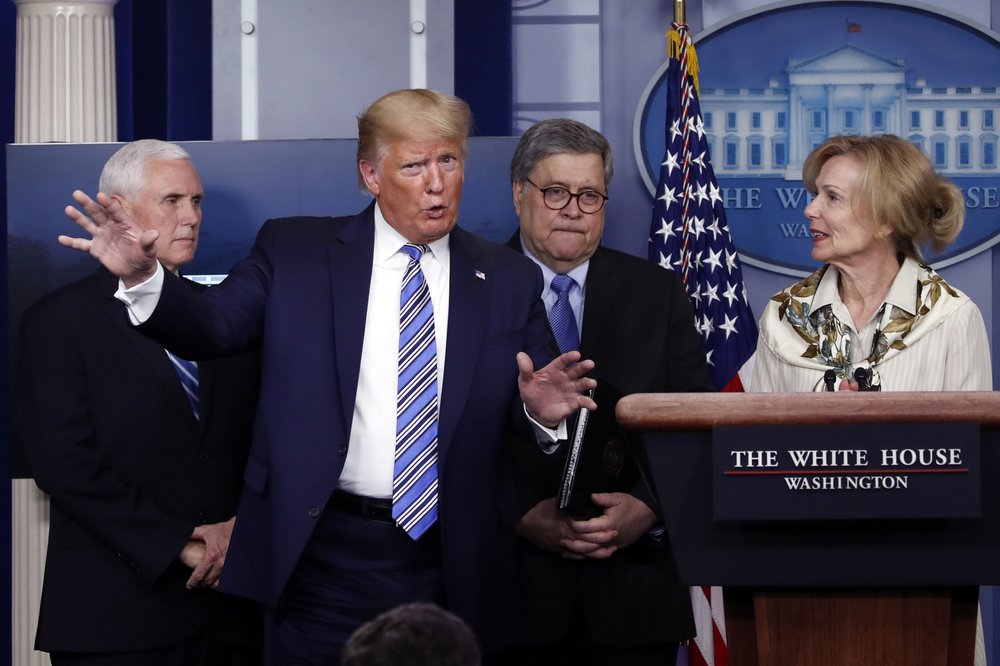 Despite warning for continued isolation, President Trump says country will get back to functioning within weeks, not months

‘The Cure Cannot be Worse Than the Problem Itself’: Trump Weighs Easing Stay-at-Home Advice to Curb Economic Rout Due to Coronavirus Health Crisis