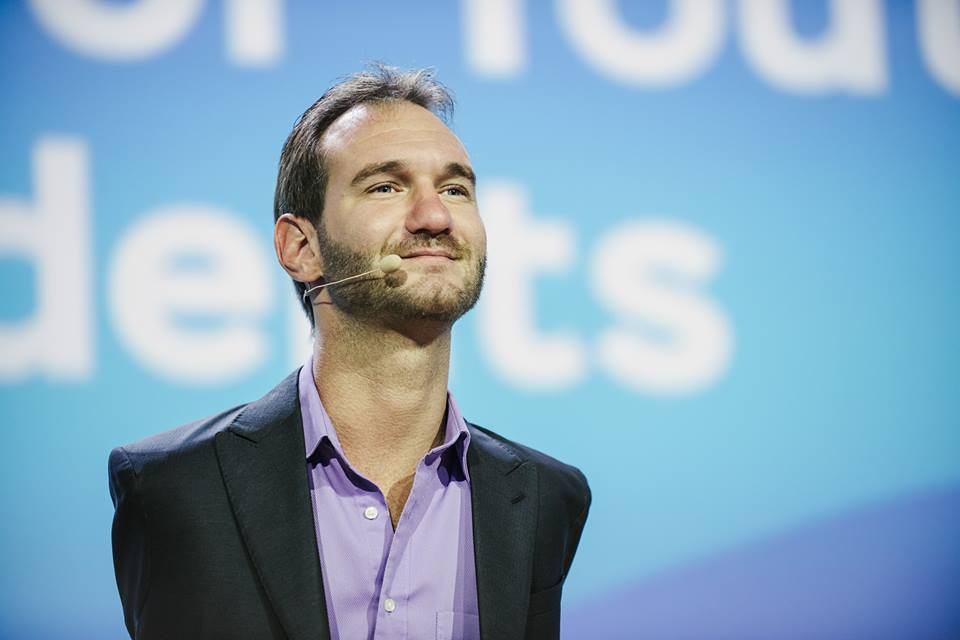 When Nick Vujicic was born in 1982, his parents were shocked to discover he was born without arms and legs. His mother, a nurse, took care of herself throughout the pregnancy, and the doctors never mentioned their baby was missing his limbs. His parents were Christians, and after working through the change in their expectations of what life with their first child would be like, they “moved forward by deciding to trust in God’s Word that ‘all things work for the good of those who love God, who are called according to His purpose.’” His parents concluded that God had a plan for Nick and would reveal it to him one day.

Although his parents trusted God with his future, Nick struggled to accept his disability. He often came home from school in tears, and at the age of ten he attempted suicide. In his teen years, he accepted Christ as his Savior. To build friendships, Nick began seeking out conversations with classmates, which helped them see who he really was and accept him. These informal conversations led to him sharing in youth groups in his late teens, and since then, he has shared his story with millions of people around the world. But he doesn’t just share how God has helped him thrive in spite of his disability, the main goal of his organization, Life Without Limbs, is to share the Gospel with as many people as possible. Nick has realized that his story has given him a platform to share Christ with people and to live out God’s plan for him.

Nick’s disability is outside of his control—a circumstance he cannot change. However, he learned to say, “[God] created me for purposes that I never could have envisioned as a child. He uses me in ways that continue to surprise and amaze me each and every day.” Instead of wallowing in self-pity about what he can’t do, Nick uses the talents and abilities God has given him to serve and glorify Him. Nick knows God has been and will be with him throughout his life, whether he is speaking to an audience of thousands or battling depression like he did as a child.

Nick’s story challenges us to face our own difficult circumstances with faith and to trust God is with us during each step of the journey. In the same way, we will be challenged as we begin studying the story of a man named Joseph in this month’s Turning Points (and finish his story next month). His story is one of someone who overcame great obstacles, who knew God was with him, and who was ultimately used by God to save his family from death.

Operation Mobilization Italy’s Mission Outreaches Grounded Due to Coronavirus; Ask God to Revive Italy with the Hope of the Gospel