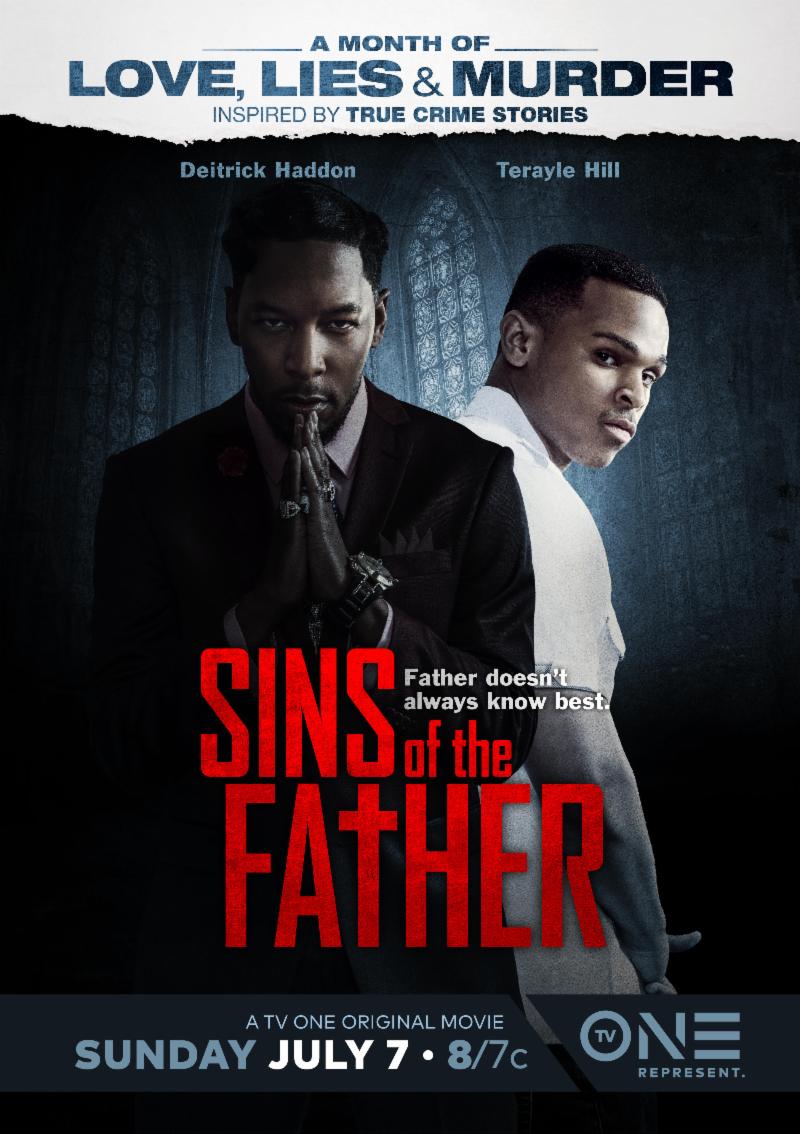 (ATLANTA) – July 7, 2019 – TV One’s original film SINS OF THE FATHER premieres Sunday, July 7 at 8 P.M./7C, immediately followed by an encore presentation at 10 P.M./9C. The film stars Deitrick Haddon (The Gospel), A.J. Johnson (Baby Boy), Clifton Powell (Ray), Terayle Hill (Merry Wishmas), Angela Davis (I Feel Pretty) and Danny Pardo (SEAL Team). SINS OF THE FATHER is the first movie to kick off TV One’s month of LOVE, LIES & MURDER films which features a series of stories that explore the dark side of love including deceit, betrayal, obsession and jealousy.
Inspired by TV One’s true crime programming, SINS OF THE FATHER follows Detectives Phylicia Richardson (Johnson) and Perez (Pardo) as they investigate the vicious murder of first lady Karen Burnett (Davis), the beloved wife of Pastor Clarence Burnett (Haddon). The crime sends shock waves through the couple’s close knit Atlanta community and the police are forced to take a deeper look into the Burnett’s inner circle, including Pastor Burnett’s son Robert Banks (Hill). As the interrogation unfolds, family secrets of abuse, infidelity, lust and cruelty are revealed within the Burnett household. The detectives soon discover that the ungodly actions of one person can have a deadly impact on many.
“In a culture where #ChurchHurt has been the trending topic, this film will give the viewer insight on how wolves in sheep’s clothing operate,” said gospel artist and film star Haddon. “Buckle your seatbelt because it’s about to get real!”
SINS OF THE FATHER is written by Katrina O’Gilvie and directed by Jamal Hill, with Leah Daniels Butler and George Pierre as Casting Directors. The film was produced by Swirl Films, with Eric Tomosunas serving as Executive Producer. Keith Neal, James Seppelfrick, Ron Robinson and Darien Baldwin serve as producers. For TV One, Karen Peterkin is the Executive Producer in Charge of Production, Donyell McCullough is Senior Director of Talent & Casting, and Brigitte McCray is Senior Vice President of Original Programming and Production.
# # #
For more information about TV One’s upcoming programming, including original movies, visit the network’s companion website at www.tvone.tv. TV One viewers can also join the conversation by connecting via social media on Twitter, Instagram and Facebook (@tvonetv) using the hashtag #SINSOFTHEFATHER. Download the TV ONE App to watch your favorite shows and movies.
ABOUT TV ONE
Launched in January 2004, TV One serves 59 million households, offering a broad range of real-life and entertainment-focused original programming, classic series, movies and music designed to entertain and inform a diverse audience of adult black viewers. The network represents the best in black culture and entertainment with fan favorite shows Unsung, Rickey Smiley For Real, Fatal Attraction, The Manns and The NAACP Image Awards. In addition, TV One is the cable home of blockbuster drama Empire, and NewsOne Now, the only live daily news program dedicated to black viewers. In December 2008, the company launched TV One High Def, which now serves 14 million households. TV One is solely owned by Urban One, Inc., formerly known as Radio One, Inc. [NASDAQ: UONE and UONEK, www.urban1.com], the largest African-American owned multi-media company primarily targeting Black and urban audiences.