Just weeks into President Trump’s first term, David Brody of the Christian Broadcasting Network asked the businessman-turned-politician whether he would make the plight of Christians facing religious persecution abroad a priority of his administration.

The president spoke about Christians fleeing violence in Syria, concluding: “We are going to help them.”

The U.S. State Department has backed up Trump’s statement, recently convening its second ministerial to advance religious freedom, intended to draw attention to the plight of religious minorities all over the world.

But an increasingly vocal band of advocates and experts says the Trump administration’s policies have failed to address many of the challenges faced by Christians, Yazidis and other religious minorities abroad — especially those in the Middle East. Some argue the administration’s efforts to scale back refugee resettlement, deport Chaldean Christians living in the United States and potentially end temporary protected status for Syrians have only made their situation worse.

“I can tell you they feel completely abandoned,” Philippe Nassif, Amnesty International’s advocacy director for the Middle East and North Africa and former executive director of the advocacy group In Defense of Christians, told Religion News Service. “They feel ignored, and in some cases, they feel used.”

Many critics point to the administration’s decision to reduce the number of refugees allowed into the United States from 110,000 under President Obama to 45,000 shortly after Trump took office. Trump later reduced the cap to 30,000 people — the lowest since the refugee resettlement program started in the 1980s — and White House officials are now reportedly mulling eliminating refugee resettlement altogether.

The reductions have sparked outrage among the nine nonprofit groups that help the government resettle refugees, six of which are faith-based.

Matthew Soerens, U.S. director of church mobilization for the evangelical Christian organization World Relief, has tracked refugees coming into the U.S. and found that Christian refugee admissions have fallen as well.

“The numbers don’t lie,” said Soerens, whose group is among those that resettle refugees.

The number of Christian refugees entering the U.S. dropped from 37,521 in fiscal 2016 to 22,747 projected for the end of fiscal 2019 — a 39% decrease, according to Soerens’ calculations using data from the State Department’s Refugee Processing Center. 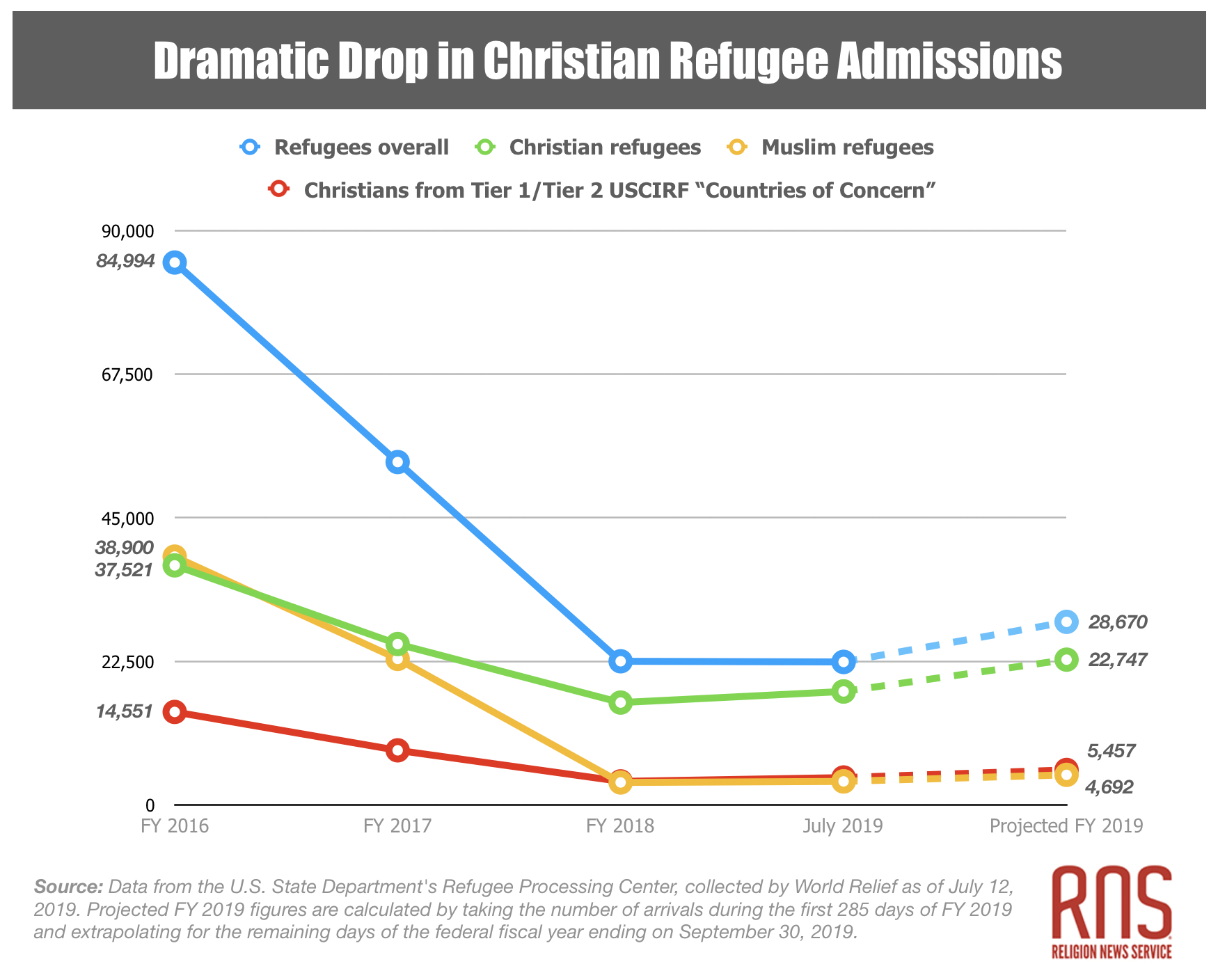 Among countries that show up in the top two tiers of the U.S. Commission on International Religious Freedom’s list of “Countries of Concern,” the decline is more drastic: 14,551 Christian refugees were resettled in the U.S. from those nations in fiscal 2016, compared with 5,457 projected for the end of fiscal 2019. That represents a decrease of 62.5%.

Only 87 are expected to be resettled this fiscal year from Iraq, one of 11 countries where officials have instituted additional vetting procedures for refugees. That is down from 1,524 Iraqis resettled as refugees in 2016.

There have also been reductions in the number of Syrian Christians: The U.S. took 68 Christian refugees from the country in 2016; this year it is projected to resettle 37.

Soerens said he was “saddened but not surprised” by the reduction in Muslim refugees under Trump, who proposed a “total and complete shutdown” of Muslims entering the U.S. during his campaign. But Soerens insisted the reduction in Christian refugees simply did not match the president’s own rhetoric on religious freedom.

“President Trump also promised to facilitate the resettlement of Syrian Christian refugees, which is a promise broken,” he said. “And the declines among other persecuted Christians, such as those from Iraq, Iran, Burma and Pakistan, are even more stark.”

The Trump administration has deflected criticism about the refugee admission reductions by pointing to efforts to rebuild the homes of displaced Christians in places such as northern Iraq, where their communities were ravaged by ISIS militants.