With two biological children at home already, Noemi Amezcua, then not yet 30, asked her priest how she could get more involved in her community.

Her priest suggested foster care — something her sister, Maria, was already doing.

Twenty-seven years and more than 100 foster children later, Amezcua is working to convince other Latino families to offer themselves as parents to kids in need.

Amezcua, now 56, and her daughter, Jc Amezcua, 27, work with FosterAll, a group that recruits prospective foster parents from faith communities in Los Angeles and gives them support and guidance during the experience. FosterAll has worked with more than 140 faith partners across the area.

There are more than 40 foster family agencies in Los Angeles. The county can also approve “resource families,” as they are called in California. Each agency has different requirements regarding languages, location, support options, philosophies and more, said Katherine Hernandez, the director of FosterAll’s programs.

It can be hard for any one person to navigate, said Hernandez, which is why FosterAll works directly with each family to find the right fit.

On Father’s Day, Noemi Amezcua set up her booth outside St. Elizabeth Ann Seton Roman Catholic Church in Rowland Heights, just east of LA, where Masses are offered in Spanish and Chinese as well as English. As people began to file out, a small crowd gathered around the booth, wanting to know more. 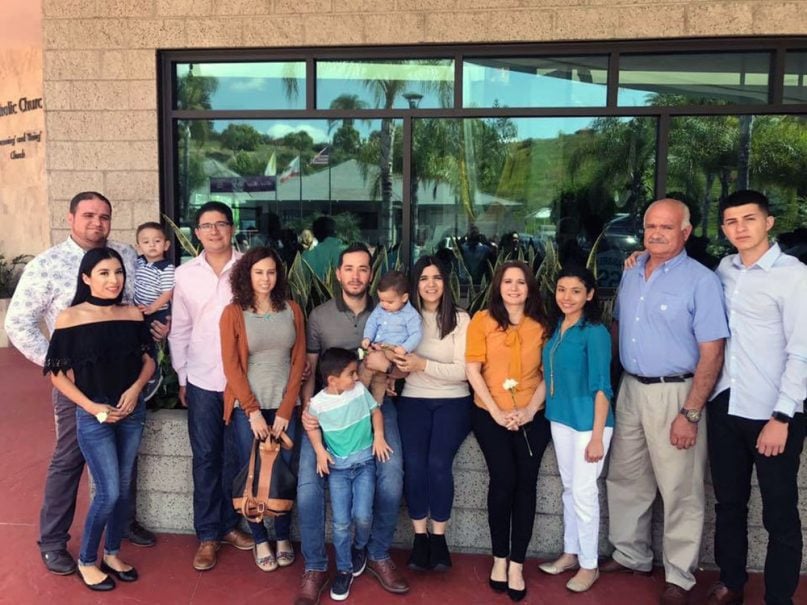 She told parts of her own stories, answered questions and invited the congregants to an informational meeting. Jc, who said she grew up not realizing how different her family is, did the same thing at other churches throughout the morning.

As the next Mass began, Noemi Amezcua walked to her car as one family continued to ask questions. She moved on to attend two more parishes that morning, with her daughter visiting a few more.

Under a state program, the Los Angeles County Department of Children and Family Services supports recruitment efforts like FosterAll’s, which focuses on faith communities and pays Amezcua to connect with Latino Catholics in particular.

“One of the best places to find stable and loving resource families is through faith communities that promote strong families,” said Michelle Vega, public affairs director at the Los Angeles County Department of Children and Family Services.