Authorities are investigating what they call “possible hate activity” after racial slurs were carved into two church vans outside Emmanuel Presbyterian Mission Church at 13403 Baxter Street sometime in the past week, according to Prince William County Police.

Around 11 a.m. Wednesday, July 3, police responded to the church for a reported vandalism incident. They found that between midnight June 26 and midnight July 3, someone carved “anti-African American speech” into the vans, which were parked in the rear lot.

Police say the incident appears to be isolated to the vehicles at the church and no threat was indicated. No suspicious people are vehicles were reported in the area during the aforementioned time frame. Anyone with information is urged to call police at 703-792-6500.

Alabama Voters Head to the Polls for Contentious Senate Election 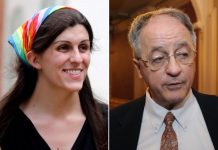 The Search for a Missing Virginia Mom, Two Kids Ends with a Horrifying Sight