Virginia Gov. Ralph Northam wasted little time getting to Virginia Beach after a gunman killed a dozen people in a city office building, the first major test of his leadership since a blackface scandal almost forced him from office four months ago.

The governor, who is also a pediatric neurologist, worked to comfort victims of Friday’s shooting and their families, while helping coordinate the massive government response. He discussed the shooting with President Donald Trump in a private phone call, stood shoulder to shoulder with other elected officials at a news conference and pressed for tighter gun control to national audiences.

The subject of widespread mockery after the racist photo from his medical school yearbook surfaced, the Democratic governor appears determined to project that he’s up to the task.

“Actions speak a lot louder than words. And I will have the leadership that’s needed,” Northam said in an interview with NPR after the shooting, while discussing potential plans to push for increased gun regulations.

Police said 12 people were killed and several others injured when DeWayne Craddock, an engineer with the city’s utilities department, opened fire inside a municipal building Friday afternoon.

Northam quickly left Richmond after the shooting and drove to Virginia Beach, speaking to local, state and other officials on the way down to coordinate responses and share information. After a news conference Friday evening, Northam took a call from Trump to discuss the shooting, with the president offering the federal government’s full support.

Michael Berlucchi, a Virginia Beach City Council member, praised the governor and other officials for their work to address the shooting’s aftermath from the city’s emergency operations center.

“Nobody carried their baggage into that room,” Berlucchi said Sunday. “The only thing I saw was public servants coming together to address the worst tragedy in the history of our city.”

On Saturday, Northam attended a vigil at a church where he told those gathered that “God is in control.” He visited a hospital to meet with survivors and thank doctors and staff.

“We lost 12 lives yesterday. If you look at the commonwealth of Virginia, we lost over 900 lives over the past two years to gun violence, gun-related accidents,” Northam said on CNN. “So I will make decisions in the upcoming days but we need to look at our laws: are they safe, do they keep people protected in the Commonwealth of Virginia?”

The governor has long been an advocate for stricter gun control. He made the issue a top priority of his 2017 gubernatorial campaign, drawing from his experience as a pediatrician and Army doctor who has treated children and soldiers wounded by firearms.

But a package of bills Northam pushed this year, including legislation to limit gun magazine size and give local governments broader authority to ban guns in city buildings, went nowhere in a staunchly pro-gun Republican-controlled Virginia General Assembly. Northam hinted Saturday in media interviews that he may be considering some kind of executive action related to gun control efforts that would bypass the legislature, but his office declined to say what specific actions he may take.

Any dramatic moves by the governor would face stiff resistance from his political opponents. Philip Van Cleave, president of the Virginia Citizens Defense League, said Northam doesn’t have any real power to impose new gun limits and any efforts to do so would be an attempt to deflect attention away his scandal.

“He’d be very happy to try and change the focus away from the blackface stuff,” Van Cleave said.

Northam has been battling for months to regain a sense of normalcy in office after a picture surfaced in February of man in blackface and another person wearing a Ku Klux Klan outfit on his medical school yearbook page. Northam has denied being in the picture, and investigators recently said they can’t conclusively establish the identities of either person in the 35-year-old photo.

The governor withstood widespread pressure for him to resign, which weakened after scandal soon enveloped his potential successors.

Fairfax was also in Virginia Beach after the shooting. He attended a church service Sunday where and pledged to take “serious action” to prevent future mass shootings. 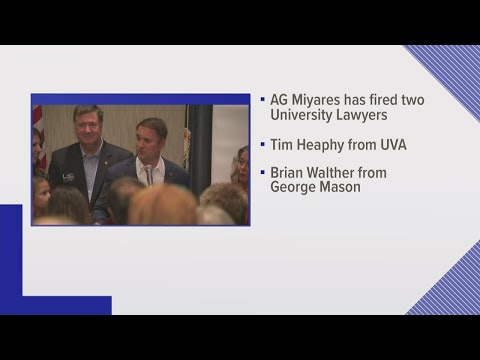 New Virginia DA Jason Miyares Fires 30 Staffers Before Being Sworn In and Launches Investigation Into Loudoun County School Board for Allegedly Covering Up...