Moore, who calls herself a Bible teacher rather than a pastor or preacher, mentioned that she’d been speaking at a church on Mother’s Day.

Her critics say she crossed a line.

Only men should be allowed to be pastors, according to the Southern Baptist Convention’s statement of faith, known as the Baptist Faith & Message. So only men should preach.

The prohibition on women clergy is shared by the nation’s two largest faith groups — the 14.8 million member SBC and the Roman Catholic Church.

Both the Baptist Faith and Message as well as the Catholic Church’s Catechism strictly prohibit women from being pastors or priests.

That puts these groups at odds with other church groups, like the United Methodists, who have ordained women for five decades. It may also put them at odds with people in the pews.

The 2011 Faith Matters Survey — a study from Harvard and Notre Dame that surveyed 2,646 Americans — asked respondents how much they agreed with the following statement, “Women should be allowed to be priests or clergy in my house of worship.” 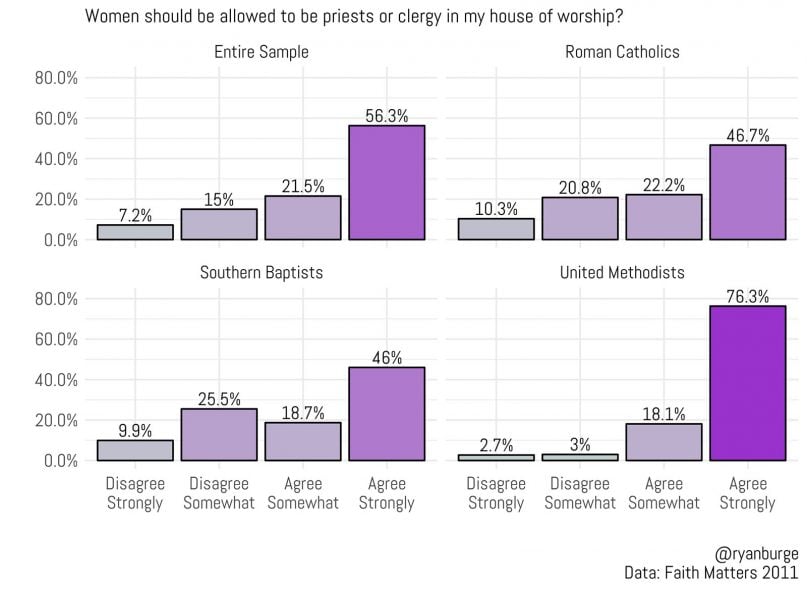 Three quarters (77.8%) of Americans agree. That includes two-thirds (64.7%) of Southern Baptists and Roman Catholics (68.9%). That could accurately be described as strong levels of support.