Church growth is something that almost every pastor and priest in the United States is concerned with on a daily basis.

If churches want to continue to thrive in the decades to come, they have to be seen as an attractive place for unaffiliated people.

However, both Catholic and Protestant churches have undergone a dramatic shift in the last two decades that may undermine their ability to attract outsiders.

White Christians — white Catholics, white evangelicals and white mainline Protestants — have shifted to the right in their partisan affiliation and now primarily identify with the Republican Party.

This rightward drift has placed these churches far away from the two groups that they need to attract the most — young people in general and people of color — both of which have maintained a moderate political stance in recent years, according to data from the General Social Survey over the past four decades.

While the staggering political homogeneity of white Christianity may provide a sense of belonging to current adherents, it may increasingly turn away people who hold different political views 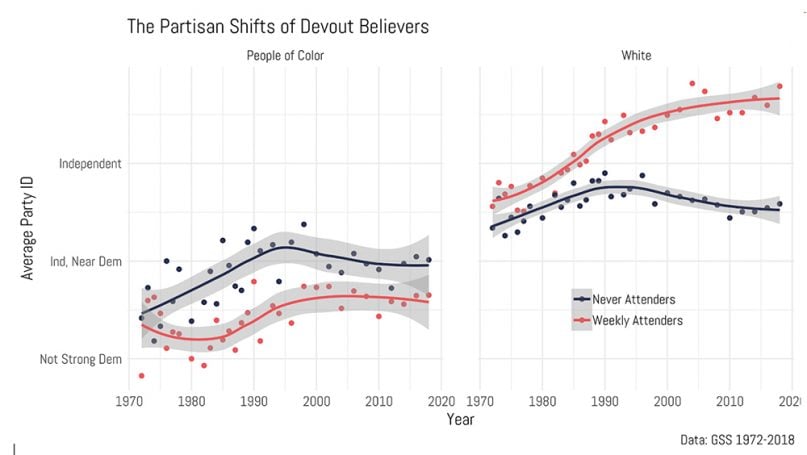 In 1972, white mainline Protestants were the most Republican group, with evangelicals in the middle of the political spectrum and Catholics solidly in the Democratic camp.

However, the three groups have moved in interesting ways since the late 1970s.

The evangelical line veered quickly toward the Republican side of the spectrum beginning in the mid-1980s and then continued to drift even further to the right.

At the same time, weekly churchgoing Catholics who could have been accurately described as solid Democrats in 1972 have seen a steady and unabated march to the right, ending up just to the right of the “Independent” option in 2018.

To be more specific, while white evangelicals moved 22.5% to the Republican side, Catholics moved 18.1% in that same direction. Newly-married Malala Yousafzai graduates from Oxford University nine years after being shot by Taliban members for women’s education protest – but girls are STILL...

Researcher Says, Many Muslims and Hindus Now Self-Identify as ‘Evangelical’ Due to Republican Ties

After Being Stripped of All-Star Game, Atlanta to Host World Series Against Houston Astros