Rapper NBA YoungBoy has reportedly been shot at in a shooting near the Trump International Beach Resort in Miami.

Authorities said two people were injured in the Sunday afternoon shooting at the Alamo Rent A Car along Collins Avenue, which is across from the Trump resort.

One of the injured included a 19-year-old woman who was rushed to the Aventura Hospital. Her condition was not disclosed. She is also believed to be YoungBoy’s girlfriend.

A third victim was shot dead. The man was pronounced dead at the scene. Their identities have not yet been released.

Photos of the scene show first responders putting a victim in the back of an ambulance. 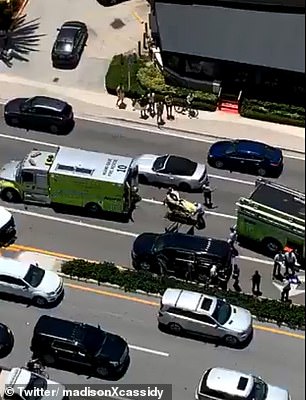 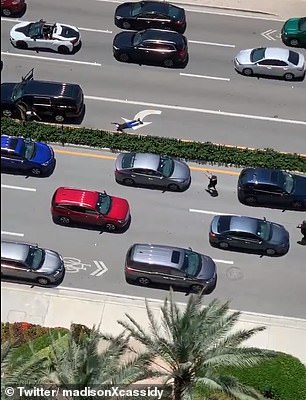 Photos of the scene show first responders putting a victim in the back of an ambulance (top). Another photo shows a many lying on the ground with his hands in the air as police surround him (bottom)

Another photo shows a man lying on the ground with his hands in the air as police surround him.

Some witnesses have claimed that the shooting was the result of a road rage incident, while others have said three suspects opened fire on the victims during a drive-by.

But according to Local 10 News, the shooting started around 1.30pm when two groups of rappers got into an argument outside the resort and exchanged gunfire.

Witnesses reported hearing about 7 to 8 gunshots at the entrance of the resort. They also claimed officers returned fire.

Sunny Isles Beach Police said the suspects were armed with an AK-47 and several handguns.

Two suspects have reportedly been arrested and police are searching for a third. 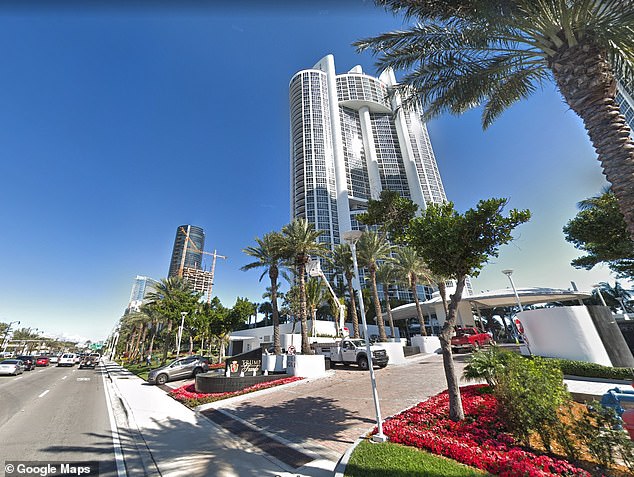 The Trump International Beach Resort (pictured) has been locked down. Guests have been told to stay in their rooms until the scene is clear

Authorities said the Trump International Beach Resort has been locked down. Guests have been told to stay in their rooms until the scene is clear.

Aventura police also said they are investigating a second shooting that may be related to the shooting near the resort. In that shooting, a driver was shot, but suffered non life-threatening injuries.

YoungBoy was scheduled to perform at the Rolling Loud music festival in Miami Gardens when the shooting occurred.

That’s the same festival rapper Kodak Black was arrested at on Saturday. Following his arrest, rapper Lil Wayne pulled out of the festival.

The shooting comes just a day after it was reported that YoungBoy has been feuding with rapper Tekashi 6ix9ine‘s baby mother, Sara Molina, and podcaster, Adam22.

In February, Tekashi 6ix9ine signed a plea deal with federal prosecutors in Manhattan whereby he admitted to various crimes, including racketeering, conspiracy, weapons possession, drug trafficking, and others.

Tekashi admitted to authorities that he joined a violent New York City gang and helped others try to kill a rival gang member.

Molina appeared on Adam22’s podcast last week and claimed YoungBoy sent her a video and cursed her out after she gave her opinion on his music.

‘Because someone asked me on my Live like, “What do you think of YoungBoy’s music?” I think he’s disrespectful so I said, “I think he’s an angry little boy,”‘ Molina recalled on the podcast.

Earlier this year, YoungBoy was arrested at the Hyatt House in Atlanta on disorderly conduct charges alongside Starr Thigpen.

The Atlanta Police Department said at the time that housekeeping staff entered the room, which they thought was unoccupied, and YoungBoy instructed Thigpen to get the staff out of the room.

Police said Thigpen struck the housekeeper in the face and the fight continued in the hallway.

The two also were charged with marijuana possession involving less than an ounce.

Another Tragic Mass Shooting in America: Gunman Who Shot Six Cops With an AK-47 and Held Two Other Officers Hostage Inside Philadelphia Home During...